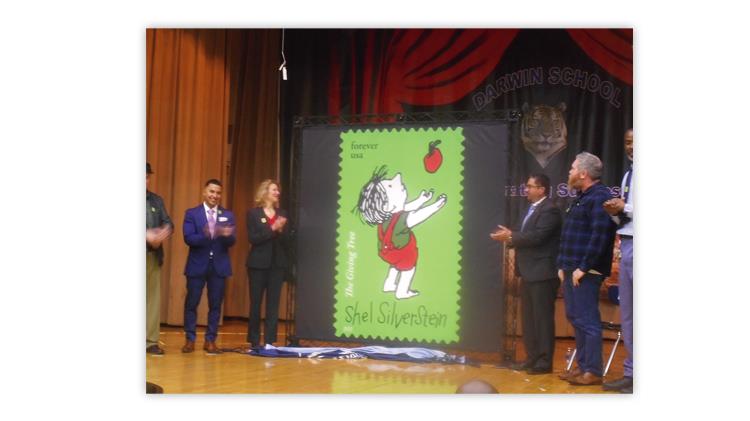 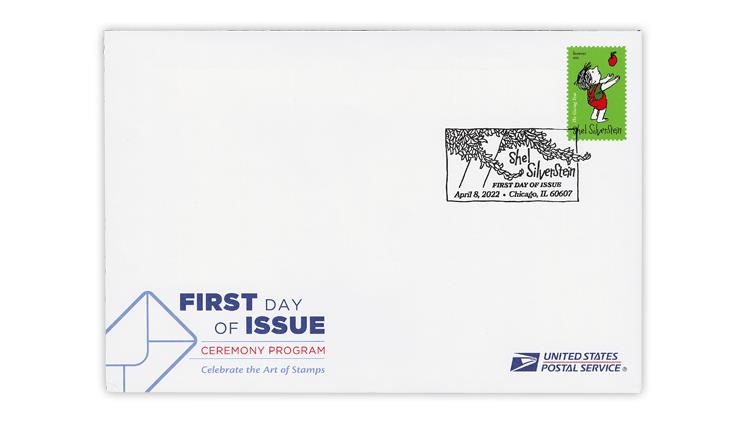 The United States Postal Service provided a ceremony program to attendees. The event drew more than 90 people to the school’s auditorium.
Previous
Next

The United States Postal Service had a spirited and enjoyable first-day ceremony for the Shel Silverstein forever stamp in Chicago on April 8.

Silverstein was a 20th-century author and illustrator who served in the Army. He had a varied early career, contributing cartoons to both Pacific Stars and Stripes and Playboy. Later he would write the song A Boy Named Sue, which was made popular by Johnny Cash.

Born in Chicago, Silverstein attended Darwin Elementary School on the northwest side of the city. The ceremony was held at this school, and the event drew over 90 people.

The highlight of the morning was listening to several groups of students sing songs or recite poems written by Silverstein. The youth of Chicago did very well.

Then followed remarks by a Chicago school administrator. Darwin Elementary School principal Daniel De Los Reyes welcomed everyone to the school before introducing Judy de Torok, who gave the dedication address. She is the USPS vice president for corporate affairs.

Officials gathered onstage to unveil the stamp. Shortly, they were joined by many children who sang more songs everyone seemed to like.

Most of the attendees were associated with the school. Virtually no stamp collectors were at the ceremony.

The USPS had just the Silverstein stamp to sell, and the stamp was only sold in full panes. The usual cancels were available. The cancels used the 60607 ZIP code, which is for an area west of downtown Chicago.

The Logan Square Station post office is five blocks from Darwin Elementary School. When I checked, none of the window clerks at the post office had heard of this stamp, and the stamp was not available for sale.