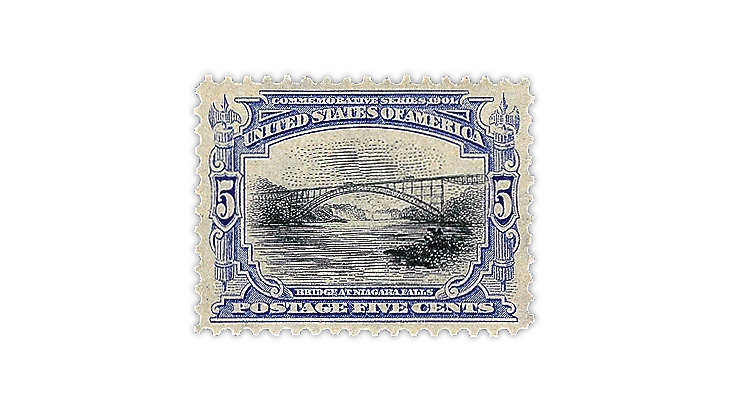 Look for the United States 5¢ Bridge at Niagara Falls stamp from the 1901 Pan-American Exposition set of six stamps.

Buffalo was chosen as the site of the fair because at the time it was the eighth largest city in the United States; nearby Niagara Falls was already a huge tourist attraction; and it had ample connections by railroad, providing access to more than 40 million people within a one-day travel radius.

A general admission ticket cost 50¢, and the exposition was attended by approximately 8 million people.

The exposition is infamously remembered for the assassination of President William McKinley there on Sept. 6, 1901, by the anarchist Leon Czolgosz.

This is one of the most attractive sets of classic bicolor engraved U.S. stamps. The stamps were issued May 1, 1901.

Look for the 5¢ Bridge at Niagara Falls stamp (Scott 297). The Scott Specialized Catalogue of United States Stamps and Covers values the stamp at $75 in unused, hinged condition and $180 in mint, never-hinged condition. The stamp is a good buy in very fine grade at about 80 percent of catalog value.