A tribute to Western garb on four new U.S. stamps 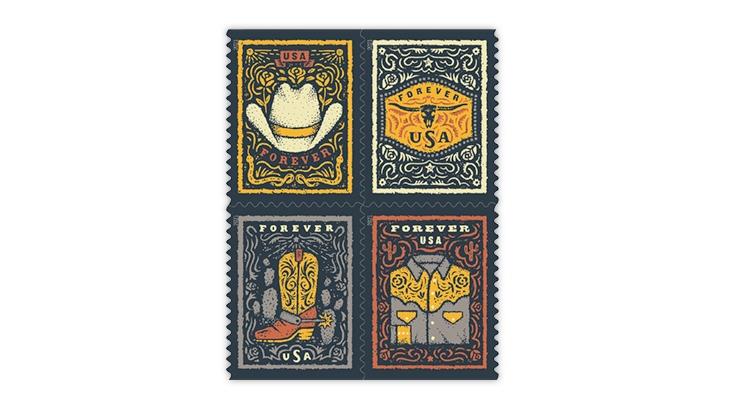 The subjects on the four new Western Wear forever stamps are a cowboy hat, a decorative belt buckle, a cowboy boot with spur, and a Western shirt. Each stamp also has smaller elements surrounding the main subject. 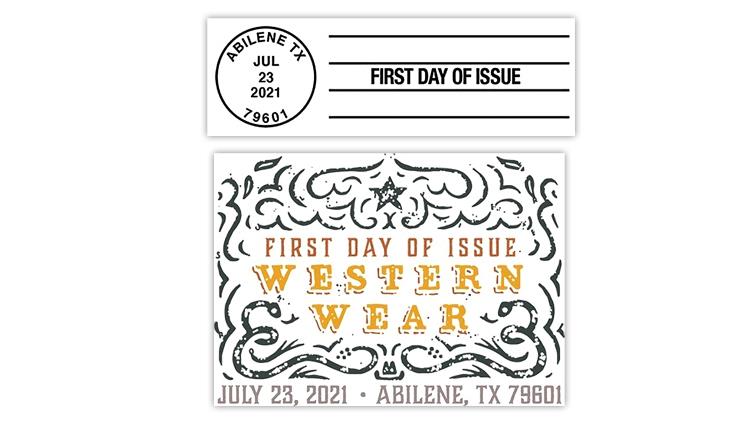 A four-bar first-day cancel in black will be applied to most collector-submitted envelopes. A digital color postmark will be used on sets of first-day covers manufactured and sold by the Postal Service.
Previous
Next

The nondenominated (55¢) Western Wear stamps will be issued in a double-sided pane of 20, which the Postal Service describes as a booklet.

Abilene, Texas, has been announced as the designated first-day city, but no public ceremony is planned for this issue.

The vignettes or central designs of these stamps each feature a different illustration by Abilene artist Ryan Feerer depicting Western clothing. The main subjects are a cowboy boot with spur, a cowboy hat, a Western shirt, and a belt buckle featuring a longhorn head.

The stamps are printed in earthy tones of gray, gold and reddish brown, with curving lines and tiny Western elements surrounding the central objects, what the Postal Service calls “iconography of the region.”

The background of the Cowboy Boot stamp includes a shining star, cacti, horseshoes and flower blooms. This stamp also shows off floral elements, along with two blazing suns in the upper corners and twin rattlesnakes in the lower corners.

The Western Shirt stamp has roses on the shirt itself, in the lower corners and along the edges next to the shirt pockets. Saguaro cacti populate the upper part of the stamp, and a single star is centered near the bottom.

Besides the longhorn head (or is it a skull?) the Belt Buckle stamp also offers flowers, four spurs with heel bands, and two five-pointed stars.

The artwork is inspired by the clothing and gear used by working ranchers, and reimagined in fun and fanciful ways, according to the Postal Service.

“The history of Western wear in the United States begins with the original cowboys,” the Postal Service said, noting that in the 16th century, the Spanish brought horses and cattle into Mexico, developing ranches that eventually spread into what is now Texas, Arizona and California.