A U.S. airmail stamp that never was 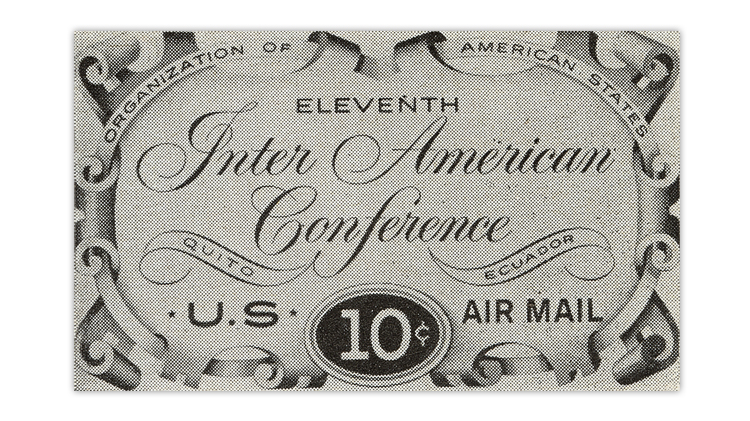 This stamp design was conceived to recognize an international conference originally scheduled for 1960. Plates were made and plate numbers assigned, but the stamps were never printed. Although this illustration is in black-and-white, the stamp design was

A Linn’s reader recently sent in the stamp design shown here and asked why such a stamp could not be found in the Scott Specialized Catalogue of United States Stamps and Covers?

It does appear to be a legitimate United States stamp design, but the reader is correct: There is no listing of this stamp in the airmail section of Scott U.S. Specialized catalog or anywhere else.

This 10¢ airmail stamp was planned and designed to commemorate the 11th Inter-American Conference to be held in 1960 in Quito, Ecuador. The illustration in Figure 1 is from the February 1960 issue of Scott’s Monthly Journal, which mentioned that the stamp was designed by Robert Geissman and was scheduled to be issued in Washington, D.C.

A short article in the June 1961 issue of Scott’s Monthly Stamp Journal (the word “stamp” had been added to the journal’s name) said that the Post Office Department had “dropped plans for the 10c airmail commemorative originally scheduled for February 1, 1960.”

The conference originally was scheduled to open on Feb. 1, but it was first postponed until May 24 and then “postponed indefinitely,” according to the aforementioned report.

The Scott’s Monthly Stamp Journal article also stated, “There will be no further need for a 10c airmail after rates to Latin America are increased on July 1.”

The article concluded, “Something over 300,000 first day cover requests, which had piled up at City Post Office in Washington since the stamp was first announced on October 2, 1959, are being returned to the senders.”

Two transfer rolls had been prepared by the Bureau of Engraving and Printing and four plates, 26564-67. But the stamps were never printed.