The affordable ways to collect essays and trial color proofs 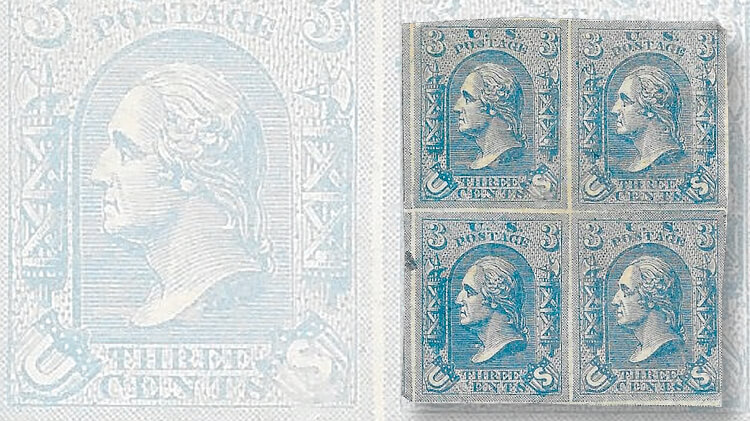 This handsome block of four in blue of the Lowenberg 1867 3¢ essay won’t break your budget. 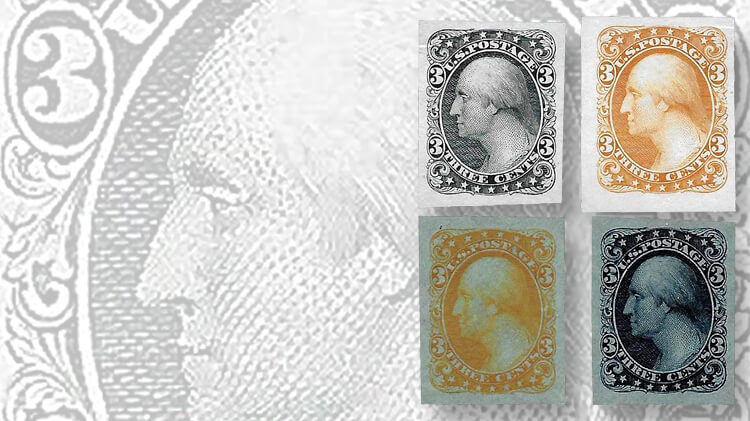 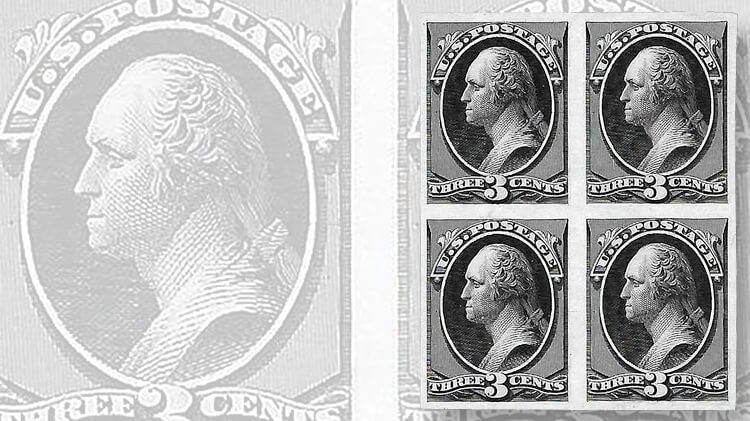 There are affordable trial color proofs out there. Here’s one option: an 1873 Continental Bank Note Co. 3¢ black trial-color plate proof block of four on India paper. 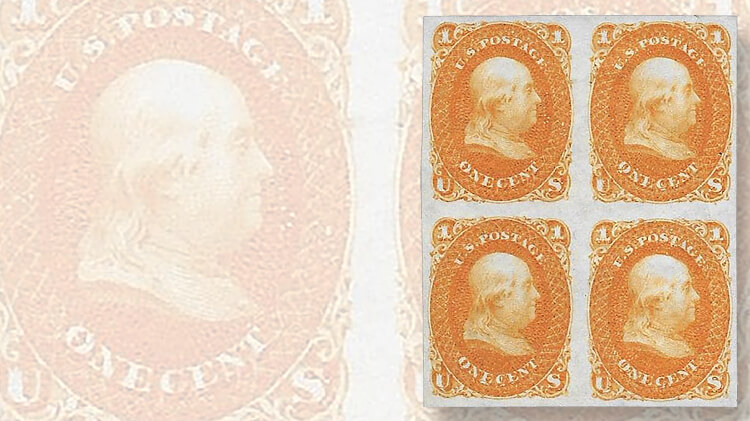 This block of four 1861 1¢ orange-yellow trial color proofs is another inexpensive possibility for your collection.
Previous
Next

At the end of my March 24 column, I asked readers to send me topics they would like to see covered in future columns. Quite frankly, the response was far greater than I anticipated.

Several readers asked for a sequel to my last column that would discuss affordable essays. The two other topics were Departmental proofs and an in-depth article on the various aspects of plate proofs.

As a result, you have before you an introduction to collecting essays and trial color proofs on a budget.

There are four areas where you can build an interesting collection of essays or trial-color plate proofs; your cash outlay will be between $10 and $50 per item. In most cases, you will be closer to the $10 figure.

The 1867 Lowenberg patent was used to produce a 25-subject plate on onionskin paper.

You will note from the illustration that Lowenberg’s design was rather crude. The design was printed in reverse on the back of a transparent paper.

The Scott Specialized Catalogue of United States Stamps and Covers lists 24 different colors, and single examples will cost in the neighborhood of $10.

This essay also was printed in gold ink and is quite rare. Henry Lowenberg eventually sold or assigned his patent to the National Bank Note Co.

National essayed his patent, using production stamp plates to produce the decal concept on “goldbeater’s skin,” which is similar to onionskin.

In 1877, the Philadelphia Bank Note Co., under the direction of Joseph Carpenter (of Toppan, Carpenter and Co. fame), produced essays of a 3¢ stamp of the firm’s design.

The intent was to secure a contract with the government to print United States postage stamps.

In 1903, Ernest Schernikow, who had purchased the dies of the defunct Philadelphia company, reprinted the 3¢ plate of 25 subjects on several different types of paper.

For the purpose of this article, only those produced on proof paper and on Crane & Co. green bond paper are mentioned. The Crane paper carries an “1887” watermark.

National Bank Note Co. plate number 27 was used to print these trial-color plate proofs on wove paper. They come both imperforate and perforate.

This was probably done sometime after 1866, when National was conducting all sorts of experiments to ensure they would not lose the contract to print our nation’s postage stamps. There were three different patents used in these trials.

The MacDonough patent employed the use of a muddy brown glycerin-based ink. The Lowenberg patent utilized a starch coating applied to the paper prior to printing. Finally, the Wyckoff patent utilized “china white,” a watercolor pigment to impregnate the surface of the sheet of wove paper before printing.

A total of 17 different ink colors were used. Most colors are available either imperforate or perforate. A single imperforate example will cost around $40, and the perforate $50.

For more information about the specifics of the stamp patents, please refer back to my Essays and Proofs column in the Nov. 24, 2014, Linn’s.

Pulling a proof refers to the technique used to create a proof impression of a die.

First, a steel die is locked into a flatbed steel chase (a frame used to hold printer’s type).

Finally, a steel roller is pulled across the chase using several thousand pounds of pressure. The result is a die proof that is sunk into the cardboard.

Continental repeated this practice for the 1875 5¢ denomination, which also was pulled on card. These sheets were used to “prove” the plates (inspect for defects).

Examples of multiples exist today with proofreader’s marks, in blue crayon, which indicate where the plates needed to be re-entered before going into production.

With the exception of the 7¢, several sheets of each denomination reached the philatelic marketplace. It is possible that only one sheet of the 7¢ reached collectors.

Over the years, most of these sheets have been cut up to satisfy collector demand. Today single examples sell in the $10-to-$25 range. The 7¢ will cost you around $75.

These four areas provide affordable opportunities to create one page or several pages for your collection.

In fact, you could create a single-frame exhibit based on any one of them. If you need more information, please send me an email.

If there is a topic in the area of essays and proofs that you would like me to write about, please let me know.

James E. Lee has been a full-time professional philatelist for more than 25 years, specializing in United States essays and proofs, postal history and fancy cancels. He may be reached via email or through his website.