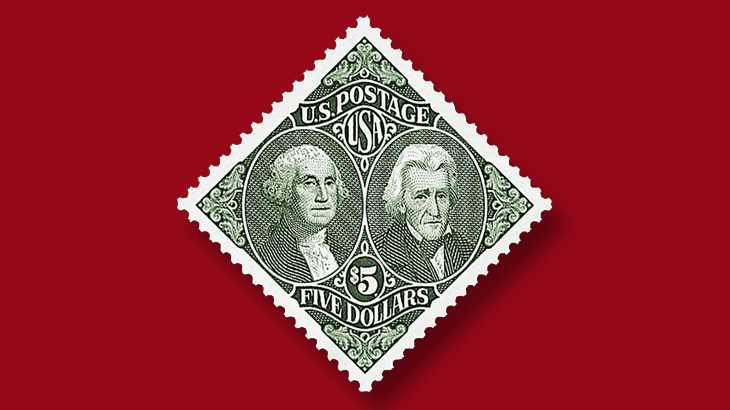 Available for nearly 24 years, the engraved $5 Washington and Jackson stamp is being pulled off sale July 31.

The United States Postal Service is taking the $5 Washington and Jackson stamp off sale on July 31.

Current stamps are taken off sale several times a year, which usually is not particularly newsworthy, but this time the circumstances are different.

The diamond-shaped $5 slate green stamp featuring the portraits of presidents George Washington and Andrew Jackson (Scott 2592) was issued back in the 20th century on Aug. 19, 1994. That means it was available from the USPS for nearly 24 years.

In this day and age, that’s a remarkable record of longevity for a single stamp.

A two-sentence announcement in the July 19 issue of the USPS Postal Bulletin disclosed that the $5 stamp was “removed from sale in the field on March 31, 2013.”

However, it continued to be available for purchase from USPS Stamp Fulfillment Services and could be ordered on the USPS Postal Store at https://store.usps.com.

“Effective close-of-business July 31, 2018, the $5 Washington and Jackson stamp will no longer be available from Stamp Fulfillment Services,” the announcement ended.

Since the $5 Washington and Jackson stamp was issued, the Postal Service has offered three other stamps with the same denomination: the $5 Freedom Statue stamp from the 2006 Washington World Philatelic Exhibition souvenir sheet (Scott 4075c), the 2012 $5 Waves of Color definitive (4719), and the $5 Statue of Freedom stamp issued this year on June 27.

The 1994 stamp was issued when Marvin Runyon was postmaster general. That was four postmasters ago.

The $5 Washington and Jackson stamp was designed by Richard Sheaff based on an unidentified 3¢ essay from the 19th century. The USPS project manager for the stamp was Joe Brockert, and the design was engraved by Yves Baril.

Removing the $5 stamp from sale shifts the title of the oldest U.S. stamp still on sale to another definitive issue.

The 2¢ Navajo Necklace in a self-adhesive pane of 20 that’s still being offered is a 2007 variety, and the nondenominated Breast Cancer Research stamp is also a revised variety, issued in 2014.