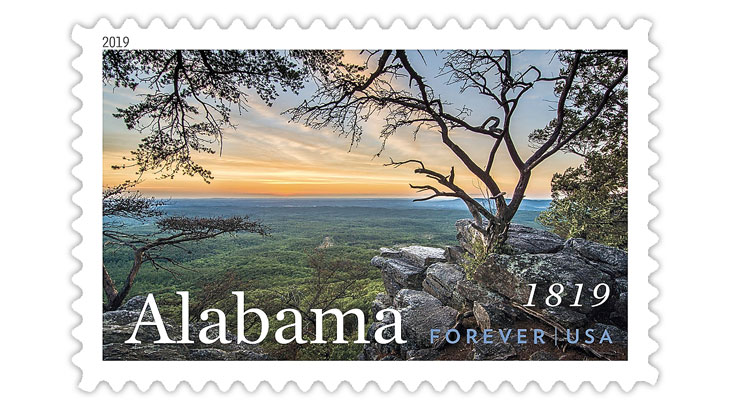 A photograph of Cheaha State Park was chosen for the United States Alabama Statehood forever commemorative stamp that will be issued in Huntsville on Feb. 23. 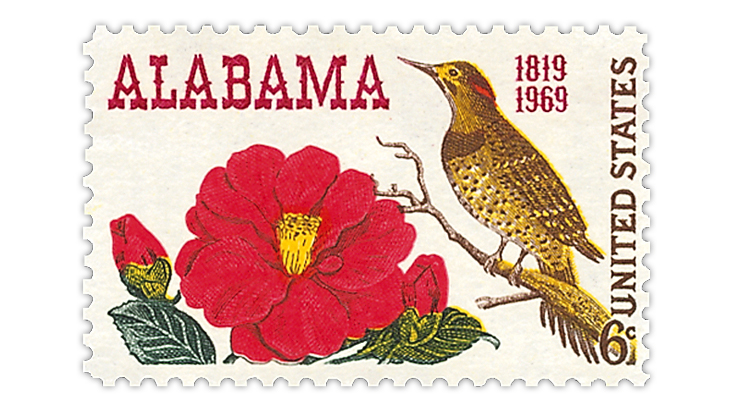 Alabama’s state bird, the yellowhammer, and its state flower, the camellia, are shown on the 6¢ 150th anniversary of statehood commemorative stamp issued in 1969. 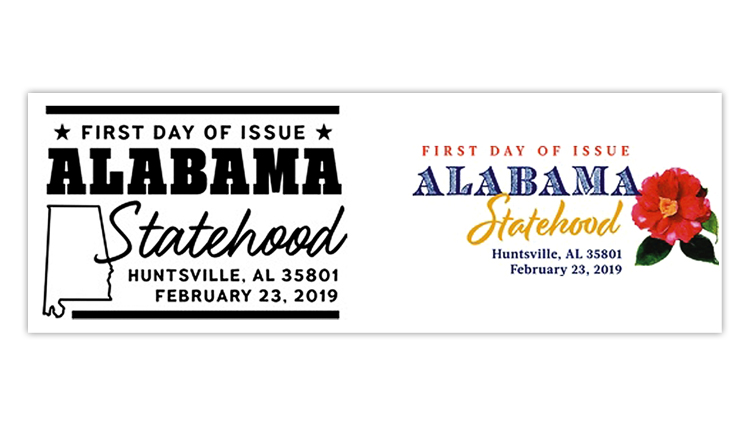 Two pictorial first-day cancels have been prepared for the upcoming Alabama Statehood stamp.
Previous
Next

A United States nondenominated (55¢) forever stamp honoring the 200th anniversary of Alabama statehood will be issued Feb. 23 in Huntsville, Ala.

“With Pulpit Rock in the foreground, most of the area in the valley below the overlook is part of the Talladega National Forest, which surrounds the state park,” according to the Postal Service.

The Postal Service is emphasizing 10 a.m. as the new time for the ceremony, and suggests that individuals interested in attending register in advance at www.usps.com/alabamastatehood.

The ceremony is free and open to the public. Participants will include Isaac Cronkhite, USPS acting chief human resources officer.

Although Montgomery is the state capital today, Huntsville, in northern Alabama, was the site of the state’s first constitutional convention, which met in a vacant cabinet shop on July 5, 1819. Alabama’s first elected representatives also met in Huntsville on Oct. 25, 1819.

Alabama was admitted as the 22nd state in the Union on Dec. 14, 1819, after separating from the Mississippi Territory two years earlier.

The state today enjoys about 60 miles of coastline along the Gulf of Mexico and Mobile Bay and shares its remaining borders with Florida to the south, Georgia to the east, Tennessee to the north and Mississippi to the west.

“Alabama’s rich history stretches from its earliest inhabitants and settlement by European colonists to its significant role in the civil rights movement and its participation in the nation’s space program,” according to the Postal Service.

“The state was at the center of many important events in the civil rights movement of the 1950s and 1960s, including the 1965 Voting Rights March from Selma to Montgomery, a route now commemorated as a National Historic Trail.”

The state’s largest city is Birmingham, the site of the American Philatelic Society’s Ameristamp Expo winter show in 2018.

Along with its important role in Alabama history, Huntsville is known for its contributions to the U.S. space program. NASA’s Marshall Space Flight Center designed and built the Saturn V rockets that powered the Apollo missions to the moon.

The state’s crops are led by corn, soybeans and cotton, with livestock farms dominating Alabama’s agriculture, according to the USDA.

Alabama’s state bird is the yellowhammer, also known as the northern flicker or the yellow-shafted flicker. It is depicted, along with the state flower, the camellia, on the 6¢ stamp from 1969 celebrating Alabama’s 150th anniversary (Scott 1375). Both were featured again on a 20¢ stamp in the 1982 State Birds and Flowers set (1953 and 1953A).

The Postal Service has printed 25 million Alabama Statehood stamps in panes of 20. Two pictorial first-day cancels have been prepared for use with the new stamp. The black postmark shows the state map outline, and the color postmark features the camellia.