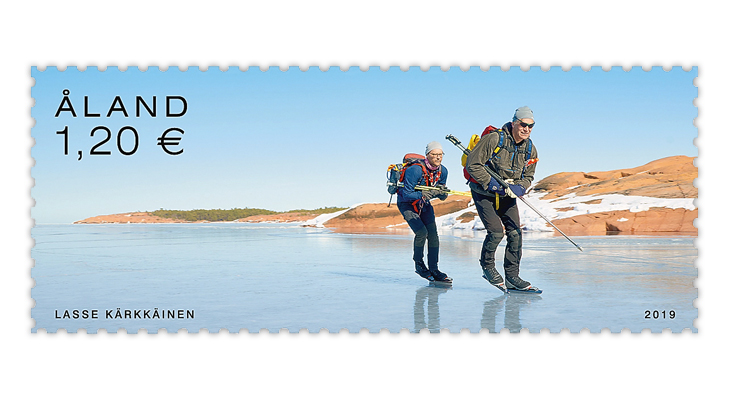 Aland will feature a type of cross-country skating called Nordic skating on an upcoming stamp. 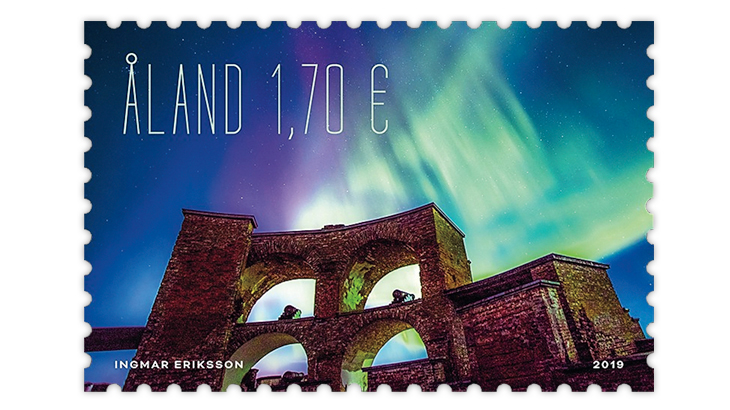 A photograph of the northern lights above the ruins of Bomarsund fortress will be shown on a stamp to be issued March 8 by Aland.
Previous
Next

On March 8, Aland will issue a €1.70 stamp showing the aurora borealis, commonly called the northern lights; and a €1.20 stamp featuring a type of long-distance ice skating known as Nordic skating.

Ingmar Eriksson took the photograph of the northern lights that appears on the stamp. The Notvik Tower of Bomarsund Fortress is shown in the foreground.

The €1.20 stamp depicts two Nordic ice skaters with their backpacks and poles, based on a photograph taken by Lasse Karkkainen.

Depending on what region they are in and how cold it is, Nordic skaters take to ponds, lakes, rivers, canals and even the sea for single-day and multi-day adventures.

Aland Post reports that Karkkainen took the photograph that is shown on the stamp a few years ago in early April during a 65-mile day trip on the ice off Geta, Aland’s northernmost municipality.

A Nordic skater himself, Karkkainen said: “It is multi-faceted and unpredictable. At times, it is an athletic feat, sometimes a journey of discovery, sometimes a spiritual experience. It’s the social encounter with other skaters, nature, the winter light, the frictionless encounter of ice and blades.”

Belgium's Bpost, printed the stamp by offset in sheets of 30.