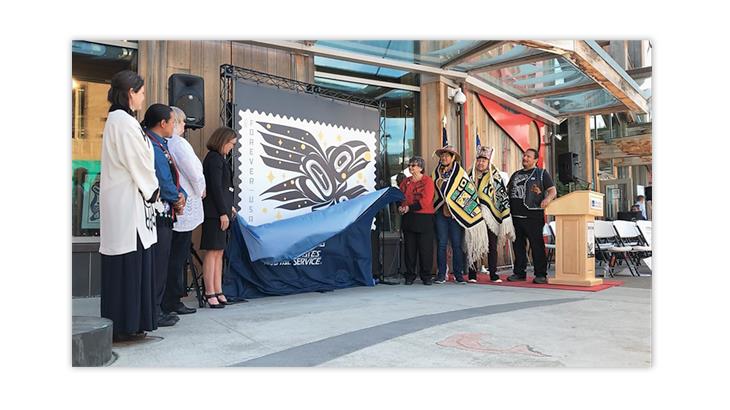 The unveiling of the Raven Story commemorative forever stamp at the July 30 first-day ceremony in Juneau, Alaska. Photograph by Jay Bigalke. 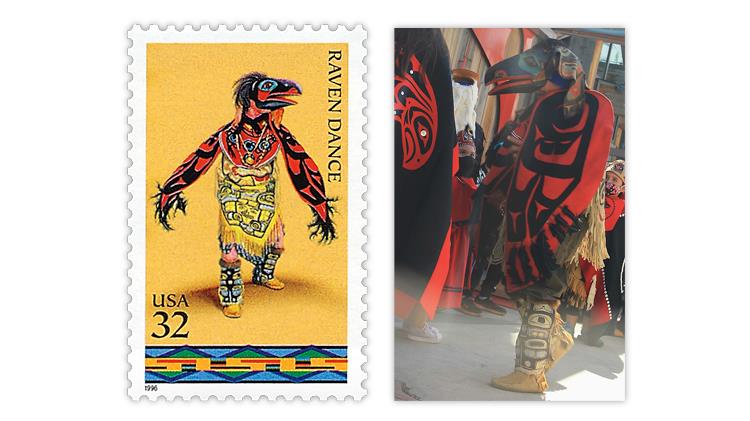 Shown are the American Indian Dances Raven stamp (Scott 3075) issued in 1996 and Nathan Jackson, a Tlingit Indian performer who was a special guest at the July 30 Raven Story stamp event in Juneau. Photograph by Jay Bigalke. 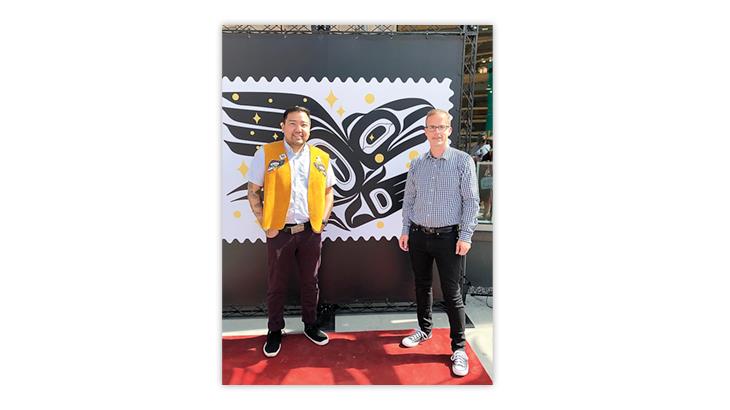 Excited and honored are understatements to say the least when it comes to describing how the speakers and attendees felt about the first-day-of-issue ceremony for the new United States Raven Story forever stamp.

The event took place July 30 in the street in front of the Sealaska Heritage Institute in Juneau, Alaska. Approximately 200 people masked up for the outdoor event that lasted about an hour and 15 minutes.

There were many highlights and numerous meaningful remarks. Pictured nearby is the group photo taken during the official unveiling of the stamp.

While attendees didn’t know about it advance, there was a special guest at the ceremony: Nathan Jackson, a Tlingit Indian master carver and performer. Photographs of Jackson in a raven ceremonial costume were used as the reference for the 1996 32¢ American Indian Dances Raven stamp that was painted by Keith Birdsong. The stamp and a photo of Jackson are shown here.

The dedicating official was Jacqueline Krage Strako, U.S. Postal Service chief commerce and business solutions officer executive vice president. Strako said that the Raven Story stamp was originally planned for the 2020 stamp program, but moved to this year because of the pandemic and because the Postal Service wanted to stage an event for the stamp.

Stamp artist and Juneau resident Rico Worl also participated in the ceremony, both as a speaker and as a dancer with his clan. Worl shared how USPS art director Antonio Alcala found his artwork in a Smithsonian gift shop and contacted him for the project. He admitted to performing an online search on Alcala to make sure it was a legitimate request.

As a side note, Worl was also nice enough to pose for photos with a few of the attendees after the event.

Near the end of the ceremony, author Frank Henry Kaash Katasse read a captivating version of the Raven story.

Ceremony programs and pins were handed out to those in the audience. Also an autograph session with the participants took place after the event.

Before and after the ceremony, the USPS had a retail table where it sold panes of stamps, first-day covers, an FDC with a pin attached to it, and long-sleeve T-shirts. I noted that a surprising number of the shirts sold, somewhere around 100.

The stamp artist Worl was spotted buying hundreds of panes of stamps, a clear indication he was thrilled with the honor of being able to work on this project.