The Alfred E. Neuman stamp that doesn’t need to be expertized 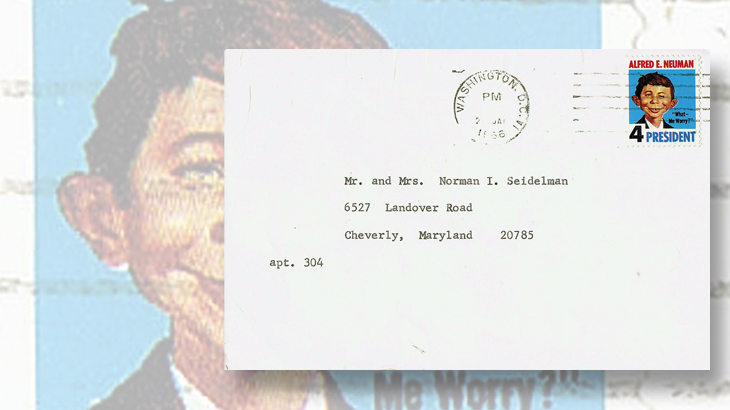 While the Alfred E. Neuman 1964 campaign label is not hard to find, a solo use on cover without any postage due is another story. 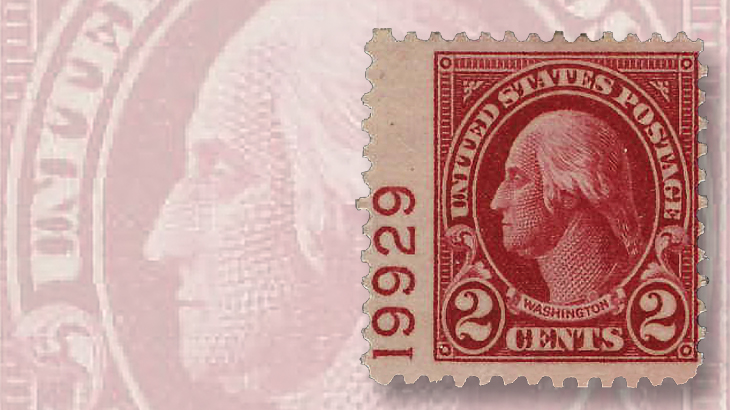 This 2¢ Washington stamp (Scott 634) is perforated so poorly that the plate number, 19929, is completely within the stamp. 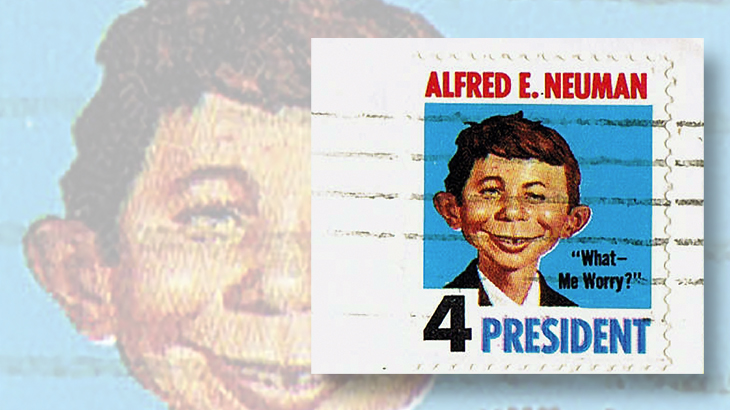 The first item is courtesy of Linn’s reader Steve Kotler from San Francisco.

In the 1964 United States presidential election, Republican Barry Goldwater ran against President Lyndon Johnson. There were other candidates as well, including the fabled Alfred E. Neuman, fictional symbol of Mad magazine.

Mad hyped the effort and magazine sales by creating a stamplike label, or cinderella, picturing Neuman and his campaign slogan, “What — Me Worry?”

If ever an item did not need to be expertized, this is it. These labels are not rare, have essentially pennies worth of value, and the market for them is, shall we say, thin.

But where did Kotler find it? On eBay, together with an expert certificate stating: “It is genuine unused, o.g. never hinged. Alfred E. Neuman for President stamp from MAD Magazine’s ‘More Trash’ issue of 1964. Issued in 1964, this stamp parodied the election between Lyndon Johnson and Barry Goldwater.”

I don’t know what the start price was, but the item did not sell. As this is being written, the label has been relisted with a “buy it now” price of $15 (or best offer), plus free shipping. Contrast this with other listings for the Neuman campaign label that offer multiples at an average of a $1 each — but of course they don’t have an expert certificate.

There is a rarity associated with this cinderella, and it is shown in the second illustration: Neuman on cover. No expertizing required for this either.

The label was used in 1966 from Washington, D.C., to an address in suburban Maryland. The cover was processed and delivered without a second thought — and with no postage due assessed.

On a more serious note, another reader sent in the perforated 11 by 10½ version of the Fourth Bureau issue 2¢ George Washington stamp (Scott 634).

The stamp is misperforated and contains 100 percent of the plate number, 19929, which would normally be in the selvage next to the stamp.

The owner asked two questions: “Would this stamp be classed as an error, freak, or oddity?” and “Is it worth getting this stamp expertized?”

Last question first: There is nothing to be gained by getting this stamp expertized. It is what it is. It could not be credibly faked. It is misperforated. Unless the owner wanted to get an opinion on original gum, or lack of a hinge mark, expertizing would be a waste of money.

Also, the plate number is genuine. According to the 2016 Durland Standard Plate Number Catalog (published by the United States Stamp Society), this number was used for Scott 634 only, so there is no mistaking what stamp it is.

As to how to class the variety, Scott and I disagree on whether this should be classed as a catalog-listed error. I think it should. It is major. It is total. It is a scarce phenomenon. But though the Scott editors perhaps may agree with all those observations, the concept of adding a potentially unlimited number of such errors to the catalog likely dissuades them from doing so.

Remember that if sheet stamps with 100-percent plate numbers were included in the catalog, then similar material on coils and booklet panes would have to be included as well, probably with the plate numbers specified.