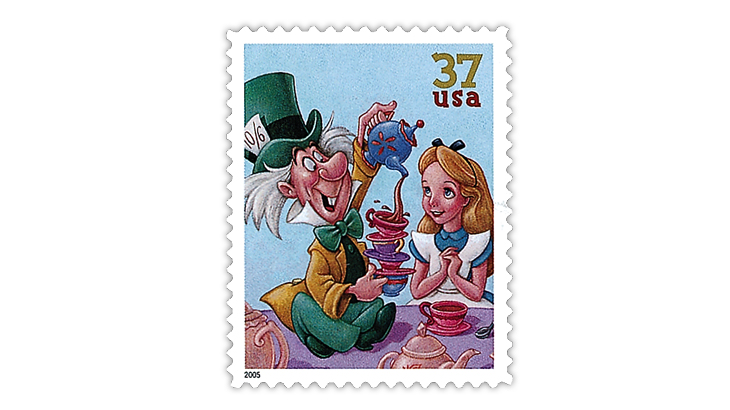 The cartoon caption contest stamp for September is this 37¢ commemorative showing the Mad Hatter and Alice from The Art of Disney: Celebration se-tenant set of four issued June 30, 2005. Entries must be received by Sept. 27 for a chance to win a prize. The rules for the contest are in the accompanying article.

The June 30, 2005, The Art of Disney: Celebration block of four includes a 37¢ stamp featuring the Disney version of Alice’s Adventures in Wonderland, the 1865 novel by Lewis Carroll. Disney’s 1951 animated film is titled Alice in Wonderland.

In addition to Alice, the stamp (Scott 3913) shows the Mad Hatter. Although this character was introduced in Carroll’s 1865 novel, the author called him simply the “Hatter.” However, the Cheshire Cat does refer to him as “mad,” and the title of chapter 7 is “A Mad Tea Party.”

Also, the Hatter’s behavior at the tea party gives substance to the expanded name. He proposes unanswerable riddles and recites nonsensical poetry. One could not predict what might come out of his mouth, so he seems like a perfect foil for the cartoon caption contest for September.

The Hatter has antecedents in real life because mercury was used in the manufacturing of felt hats during the 19th century, causing a high rate of mercury poisoning among those working in the hat industry.

Mercury poisoning causes neurological damage, slurred speech, memory loss and tremors, which taken together might well convince someone that the sufferer was impaired.

For the cartoon caption contest, you have a choice. You can put yourself under the Hatter’s hat, and tell me what you think he might be saying or thinking. Or you can tell me what Alice might be thinking or saying about the Mad Hatter.

There will be two prizes given to the winners: one for the best Hatter line, and one for the best Alice line. The important thing is to use your sense of humor, because entries with a humorous twist have the best chance of winning a prize.

For each winner, the prize will be a 13-week subscription to Linn’s (a new subscription or an extension). Entries must reach me no later than Sept. 27.