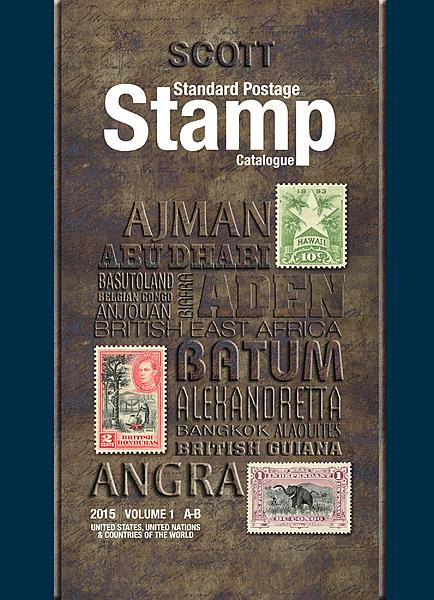 There are a number of notable increases in the U.S. postage section, including the 1857 3¢ rose Washington stamps (Scott 25 and 25A), both rising in unused condition.

The bulk of the value changes are concentrated in the postal stationery and U.N. sections.

Values for cut squares continue to drop, a trend that began in earnest last year. Collectors appear to be gravitating toward envelope entires, with action concentrated in used entires.

Of the 1,200 value changes seen in the U.N. listings, increases are concentrated in the modern issues.

A notable error listing in this year’s edition includes the unusual die-cutting-omitted error from the 23¢ Wilma Rudolph booklet pane of 10 (Scott 3436c). The plate number, P44, and the product number on the back of the pane indicate that the new error comes from the printing used to produce the folded booklet without the peel strip in the middle (Scott BK279A). On the error, the peel strip is intact.

There are new listings for the imperforate pairs of the 1940 stock transfer stamps (Scott RD67a-RD85a). The pairs are valued without gum at $250 each.

A new Confederate postmaster’s provisional has been added for Fort Valley, Ga., as Scott 148XU1.

In the U.N./New York section, a new printing variety has been added to the listings for the U.N. Emblem stamp of 1965. Produced using a new plate/cylinder for the dark blue color, the new stamp is Scott 149a. The tagged variety from the Berlin printing has been changed from Scott 149a to 149b.

More than 900 value changes were made in the listings for the Bahamas. Ready availability of stamps from the beginning of the reign of Queen Elizabeth II through the early 1990s has kept values steady or slightly declining. Among the handful of increases are the minor varieties of the 1996 Shells definitives that are inscribed 1997, 1999, 2000 and 2001. Each of these sets rises about 10 percent.

Other countries in Vol. 1 with substantial numbers of value changes include Benin and Bermuda.

The cover price for the printed version of Vol. 1 and each subsequent 2015 Scott Standard Postage Stamp Catalogue volume is $119.99. Linn’s Stamp News subscribers are eligible for a discount when purchasing online direct from the publisher through the Amos Advantage program.