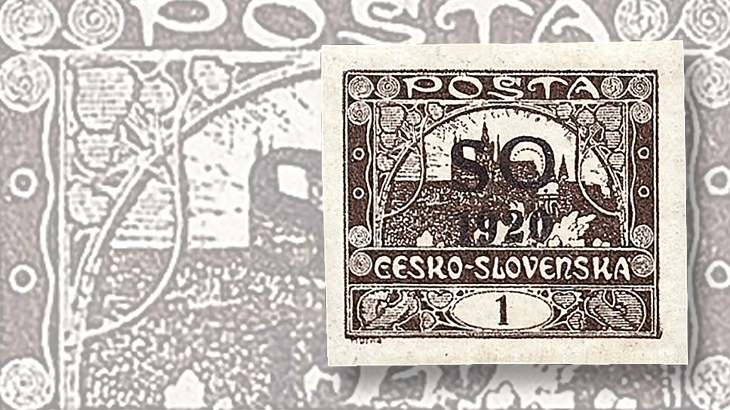 The Hradcany Castle stamps were overprinted for use in Eastern Silesia, a disputed region between Czechoslovakia and Poland, in 1920. 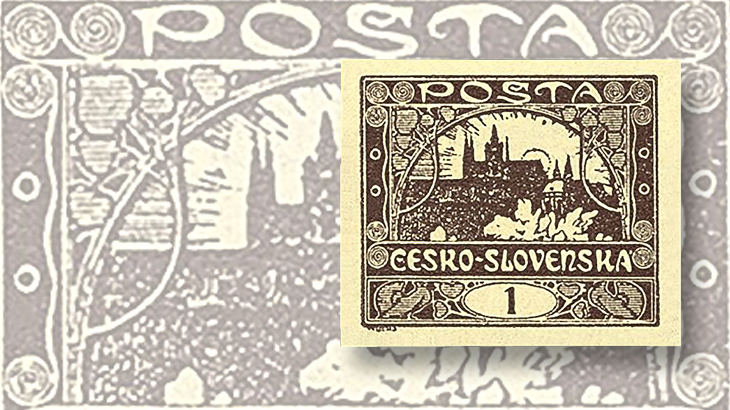 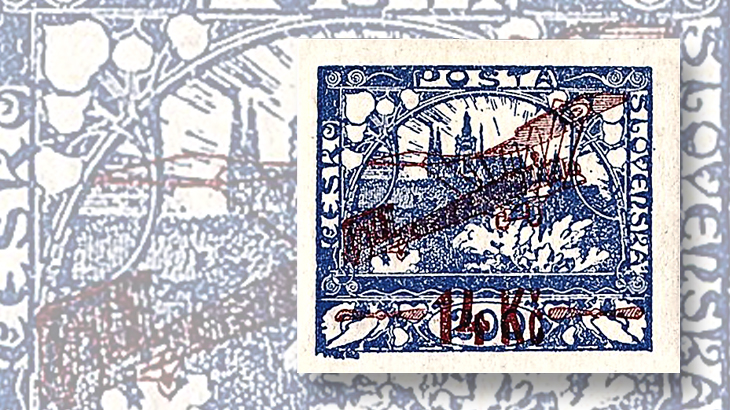 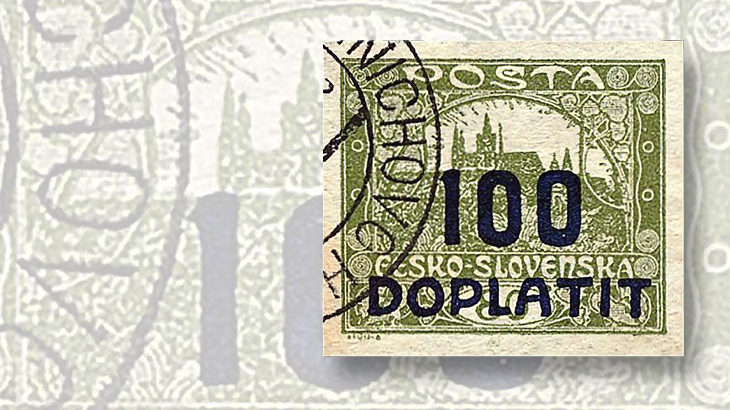 Surcharged postage due stamps were issued by Czechoslovakia in 1922. 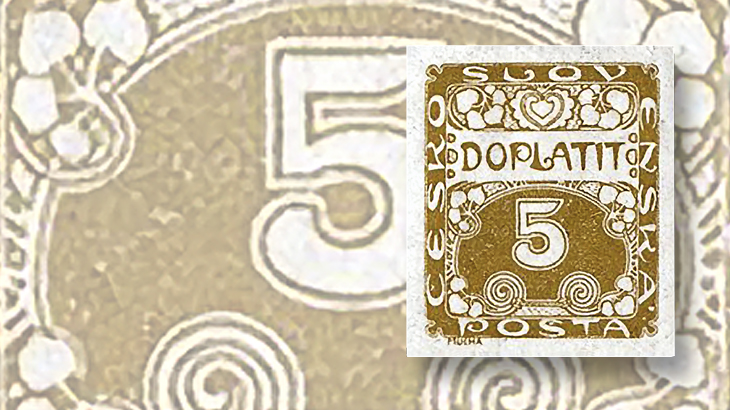 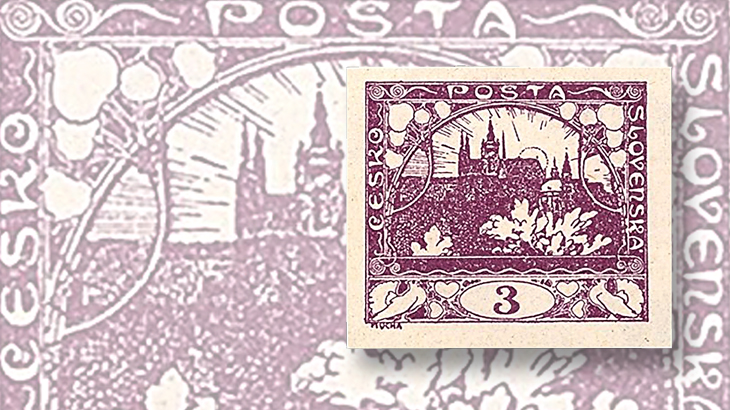 The first postage stamps of the Republic of Czechoslovakia, designed by art nouveau artist Alphonse Mucha in 1918, show a realistic image of Hradcany Castle in Prague. 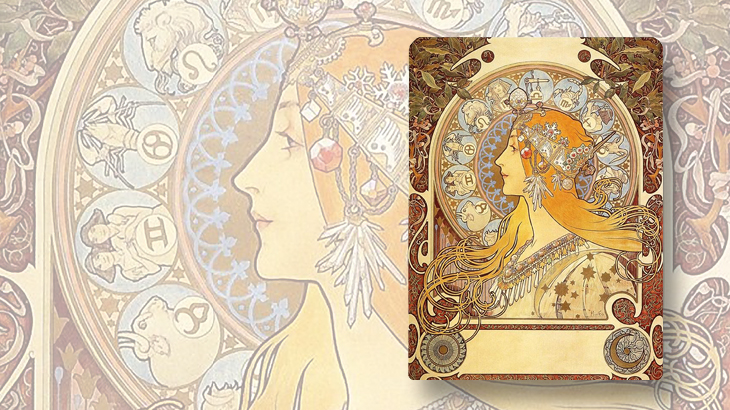 A calendar design created by Alphonse Mucha in 1896 shows the symbols of the zodiac around a beautiful woman, in his lavish art nouveau artistic style. 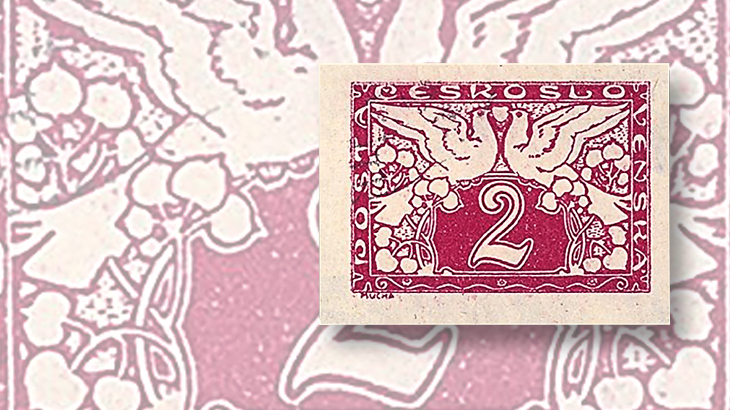 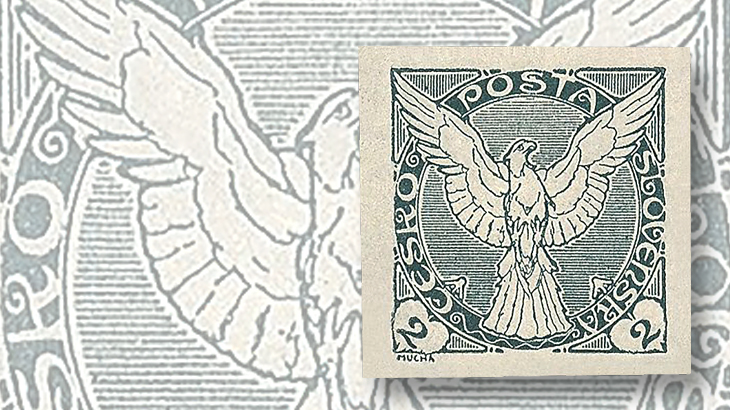 The first Czech newspaper stamp, issued in 1918, uses a fanciful Alphonse Mucha design of a windhover, a bird that can fly in place. 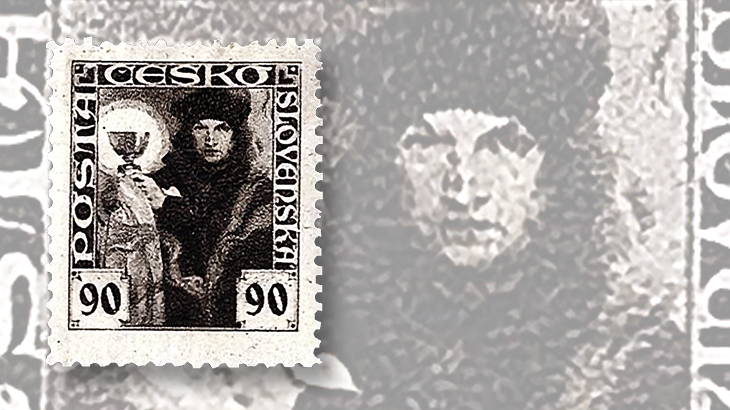 Part of a 1920 stamp set, Alphonse Mucha’s design of a Hussite priest was protested by a religious group, who forced the stamp into a limited issue and short period of use.
Previous
Next

Alphonse Mucha is perhaps the best-known artist of the art nouveau movement of the late 19th and early 20th centuries.

Born in 1860 in what was then Moravia, the painter and decorative artist became instantly famous in Paris in 1895 after producing a poster for the wildly popular stage actress Sarah Bernhardt, in his distinctive interpretation of the art nouveau style.

Typical of the “Mucha style” is the design in the first illustration, from a calendar the artist made in 1896, showing a woman framed by the signs of the zodiac.

The aftermath of World War I brought drastic political, cultural and social change across Europe, Asia and Africa, including the collapse of the German, Austro-Hungarian, Russian and Ottoman empires.

In October 1918, they formed a provisional government in Paris that was recognized by the Allied powers, and formally declared the creation of a new independent nation: the Republic of Czechoslovakia.

The fledgling government chose Alphonse Mucha, who was then engaged in creating a huge, multi-canvas project for the City of Prague called the “Slav Epic,” to design the first stamps of the new republic.

Perforated versions of some of the denominations were issued later (Scott 13-16, 20).

Hradcany or Prague Castle, which dates from the 9th century, is in the Guinness Book of Records as the largest ancient castle in the world, and has served as the seat of power for kings of Bohemia, Holy Roman emperors and rulers of Czechoslovakia.

Today it is the official residence of the president of the Czech Republic.

The 1918 stamps incorporate elements of the art nouveau style for which Mucha was known.

The artist explained his choice of design in these words: “Every nation has a palladium of its own embodying past and future history. Ever since my boyhood I felt and saw in the architectural lines of St. Vitus Cathedral built so close to the castle, a powerful interpretation of our national symbol. I could, therefore, select no other subject for my design then Hradcany Castle and the surrounding architecture of the Middle Ages.”

These stamps were imperforate but perforated versions (41-47, 50, 53) were issued later.

In 1920, Mucha’s Hradcany stamps of 1918-20 were overprinted “SO/1920” for use in Eastern (Cieszyn) Silesia, a disputed area between Czechoslovakia and Poland. A total of 20 imperforate (Eastern Silesia Scott 1-18) and nine perforated stamps (20-30) were issued.

The first airmail stamps of the Republic of Czechoslovakia were issued in 1920 and consisted of both types of Hradcany Castle stamps surcharged and overprinted with a butterfly-like monoplane in red, blue or green. Three issues were imperforate (Scott C1-C3); another three stamps were perforated (C4-C6).

The Scott Standard Postage Stamp Catalogue refers to the design as portraying a “windhover,” which refers to a bird with the rare ability to hover in the air, flying in place while scanning for prey. This design is more in the Mucha style than were the Hradcany Castle stamp designs.

Postage due stamps designed by Mucha also were issued in 1918-20 (Scott J1-J14). The imperforate stamps depict art nouveau design elements framing the inscription “DOPLATIT” (literally, “pay”) and the denomination of the stamp.  These stamps also were surcharged with new values in 1924 and also were overprinted “SO/1920” for use as postage due issues in Eastern Silesia (J1-J11).

Various Hradcany Castle stamps also were surcharged with new denominations for use as Czechoslovakia postage due stamps.

Three imperforate special delivery stamps designed by Mucha depict two doves in the elaborate art nouveau style. A 2h and a 5h (Scott E1-E2) were issued in 1919, followed by a 10h stamp (E3) in 1920. The 2h and 5h denominations were overprinted “SO/1920” for special-delivery use in Eastern Silesia (E1-E2).

A rather peculiar stamp design by Mucha was used on two denominations of a set of 17 stamps in 1920.

The Hussites, which means “chalice people” in the Czech language, were a Christian movement that followed the teachings of Czech religious philosopher Jan Hus (c. 1369–1415), a forerunner of the Protestant Reformation.

Hus was deemed a heretic by the Catholic church and was burned at the stake in 1415.

Mucha’s 1920 stamp design was opposed by Czech Catholics, who were able to influence the Ministry of Posts and Telecommunications into supplying only a limited number of post offices throughout the country with the stamps, which would remain valid for postal use for only 10 months.

A total of six different stamp designs, including the one used on the very first issue, were created by Alphonse Mucha for the new Republic of Czechoslovakia.

Three of these designs, all for back-of-the-book stamps, display the strong influence of the art nouveau style for which Mucha was most famous.

The remaining designs, which are based on the history and culture of the Czech people, are influenced to a lesser extent by the art nouveau style.

The prolific and much admired artist died in Prague in 1939.