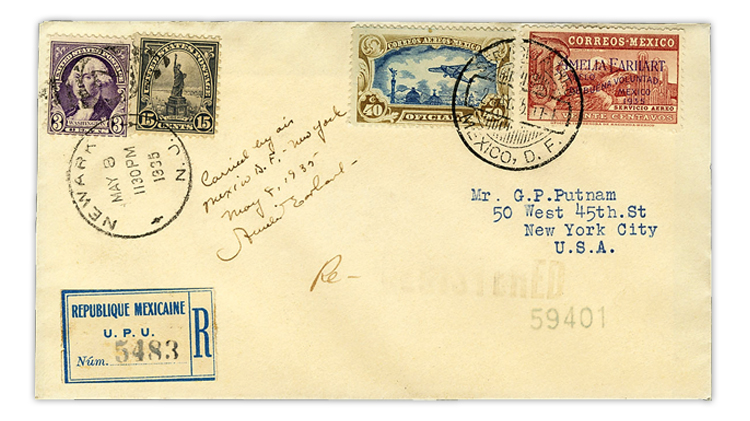 With a notation written and signed by Amelia Earhart, and addressed to her husband, G.P. Putnam, this cover carried on a solo Earhart flight from Mexico City is offered in the March 12-13 Cherrystone auction in New York City.

A 1935 airmail cover mailed in Mexico, carried by aviator Amelia Earhart and signed by her with a notation about her flight details will be offered in the next Cherrystone auction.

The registered mixed-franking cover, addressed by typewriter to her husband, publisher G.P. Putnam, is included as part of the March 12-13 auction at Cherrystone’s New York City galleries.

The Earhart cover is one of 40 carried on her pioneering 1935 solo flight from Mexico City to New York. It is personally endorsed by Earhart following her notation “Carried by Air, Mexico, D.F.-New York, May 8, 1935.”

The cover has additional transit and arrival markings on back, according to Cherrystone, as well as registry seals.

The first solo flight from Mexico City to New York, the trip was completed in 14 hours and 22 minutes, according to contemporary newspaper accounts.

It took place four years after her Feb. 7, 1931, marriage to Putnam, and two years before her final flight, an around-the-world-attempt with flight navigator Fred Noonan that ended with their disappearance over the Pacific Ocean on July 2, 1937.

The cover is offered by Cherrystone with a minimum bid of $7,500.

The U.S. material in this sale includes two examples of the 1911 3¢ deep purple George Washington coil stamp known as the Orangeburg coil (Scott 389). Both are struck with a wavy line cancellation.

Examples of the scarce stamp often suffer from condition problems because they were used to frank bulky pharmaceutical samples. One of the two in this sale is described as “a rare sound example,” the other has a small corner crease and two small tears, Cherrystone notes.

An unusual variety from the British Commonwealth is the unused New Britain 1914 3-penny surcharge on the Marshall Islands 30-pfennig orange and black Kaiser’s Yacht stamp, with the “G.R.I. 3d.” surcharge inverted (New Britain Scott 35b).

The example in this sale has a $7,500 minimum opening bid.

Individual lots from the upcoming auction can be viewed at www.cherrystoneauctions.com, with online bidding options available.