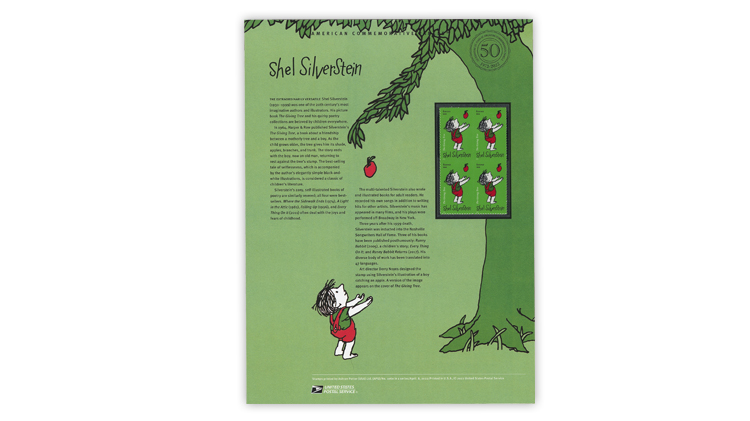 The American Commemorative Panel for the Shel Silverstein stamp issued April 8 includes an engraved 50th anniversary logo in the upper right corner. This logo will appear on all of this year’s panels.

The panels typically have been created for commemorative stamp issues only, with a few exceptions, and include a block of four stamps (unless the stamp set has more stamps in it) in a protective mount affixed to what the Postal Service calls “sturdy card stock” with text about the stamp issue and an engraved element on the page.

This year, the engraved element is the same on each panel; in the past, it was related to the stamp issue. A celebratory 50th anniversary crest was created and used on each panel to note the anniversary.

Pictured nearby is the panel for the Shel Silverstein forever stamp issued April 8. The 50th anniversary logo is in the upper right corner.

The Scott Specialized Catalogue of United States Stamps and Covers lists commemorative panels with the prefix “CP” in the back-of-the-book section.

The Postal Service sells individual panels per stamp issue on its Postal Store. Search for “panel” to find the items available. The USPS also offers a subscription service so collectors don’t miss out on an issue. A phone call to 844-737-7826 is the easiest way to set up that subscription.

There is also a philatelic club that specializes in these panels: the American Society for Philatelic Pages and Panels.