American Philatelic Society, library are planning for what comes next 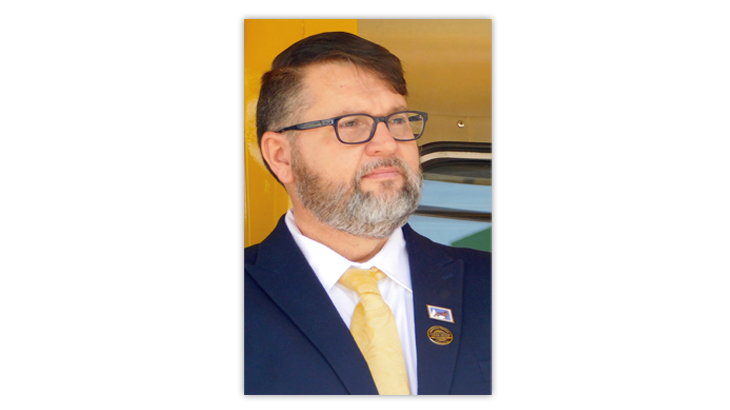 Like many businesses and organizations around the world, the American Philatelic Society is looking forward to a new and possibly quite different future.

Its headquarters at the American Philatelic Center in Bellefonte, Pa., closed March 16 in response to the worldwide coronavirus COVID-19 outbreak, putting a big dent in many of its most popular member services. The closure, further impacted March 22 by additional state government orders, also shuttered the American Philatelic Research Library.

The APS and library staff have been working from remote locations ever since, but according to executive director Scott English, some staff members might return to headquarters at the beginning of June.

English addressed a joint meeting of the APS board of directors and the American Philatelic Research Library trustees April 23, with all participants attending online. The meeting was originally scheduled to take place in person in Burlingame, Calif., just south of San Francisco, prior to the Westpex stamp show, but that plan was scrapped after the stamp show was canceled in response to the coronavirus outbreak.

English told the boards and attending society members that the APS sought relief April 3 under the federal Paycheck Protection Program. The loan from the U.S. Small Business Administration was approved April 15 and funds were deposited April 17.

The funds will be used primarily for APS staff payroll and benefits such as health care, and additional items. English said he anticipated that not all of the loan will be needed.

“The program is forgivable,” English explained, “and we do expect, based on all of the constraints we have on the money that we’re going to use, that we will, in fact, meet the expectations of forgiveness. I think that we’re in good stead to be able to use that to ease the budget pressures.”

English noted that there are no current plans to reduce staff, but he also encouraged society members to consider donating to the APS Cares program, which is used to support APS staff salaries.

English reviewed how the society and the library are functioning under the March 22 order by Pennsylvania Gov. Tom Wolf to close all “non-life sustaining” businesses.

That order was extended and will continue at least through May 8. As a result, it is likely the American Philatelic Center, which houses the society headquarters and the library, will be closed through the end of May.

“How we proceed,” English said, “what we think about, what we’re thinking through, is going to really be dictated by our ability to keep people safe in a time of a global pandemic, which is a huge challenge.”

A back-to-business committee has been formed to plan for how APS operations will resume once the building is reopened. Some staff members will continue to work remotely, while others might split their work time between the American Philatelic Center and home.

The closure has affected revenues, putting pressure on the APS/APRL budget, according to English. After experiencing a loss of revenue in circuit sales, expertizing and other areas, the society could suffer an operating shortfall of $125,000 “under the worst-case scenario,” he said.

The annual APS Summer Seminar has been canceled for 2020. Participants already registered have been notified and given the choice of accepting a refund or a fee carryover, or donating the fees already paid. The APS Education Department is developing an online Summer Seminar program, and details will be available by May 1.

Stamp shows across the United States and around the world have been canceled over the past several weeks, but plans are still in place for the Great American Stamp Show, to be hosted Aug. 20-23 in Hartford, Conn., by the APS, the American Topical Association and the American First Day Cover Society.

“We’re working with the convention center and its staff and local officials to monitor the situation and keep aware of any events and updates that are happening through the state of Connecticut,” English said, “and we’re going to work on understanding as quickly as possible what’s happening.”

The global pandemic has had an impact on new member applications, English said. So far in 2020, the society has received 419 membership applications compared to 490 at the end of April 2019. English said the new member process was “going like gangbusters” in the early months of the year before the pandemic struck, and he encouraged all members to recruit new members and introduce them to the benefits of APS membership.

English reminded the board that the society is offering a $25 digital-only 12-month membership for new members under age 30.

Among the services currently impacted, English said, are circuit and Internet sales, expertizing and the library. While some services came to a near standstill when the closing first occurred, the APS staff quickly mobilized to resume services to every extent possible under the circumstances.

Returns of stamp circuit sales and payments are now being accepted, and members are encouraged to send purchase report sheets to the APS and to mail the circuit to the next recipient. However English stressed this should only be done when the sender can safely access the United States Postal Service. All late fines have been waived through June 1.

New stamp circuits are being accepted by the APS but are not being shipped. Checks to sellers are currently delayed until the headquarters reopens.

The online APS stamp store is open for business, and while orders are being accepted and payments are being processed, there are some delays in shipping purchases, though no more than two weeks, English said. Checks going out to stamp store sellers are also being delayed until the reopening.

The expertizing staff is currently unable to issue certificates on submitted material, but English said they are working to get that process restarted within two weeks. New submissions to the expertizing division are allowed, but submitters should be aware that there will be delays in processing them.

While some library research requests can be addressed remotely, library staff are still not allowed on site at this time. Late fees on books are being waived through June 1. Library staff are working remotely and can be contacted by email at library@stamps.org.

Looking to the future, English laid out an APS response to the crisis that includes increased communication and dialog with members, and risk assessment through short-range, mid-range and long-range planning.

Along with resuming normal operations as quickly and responsibly as possible, English plans to strengthen operational plans for future events and make adjustments as needed to the society’s 2020 priorities.

“This organization will come back through this stronger than it was before this started,” English said. “I don’t mean for that to sound like a cliche: I promise you this is true. But first we have to respond and not react, which means we cannot sit around and wait for the world to come to us — we have to go out into the world.”

For additional information about the American Philatelic Society, visit online.

A chance to win an APS life membership in 2020