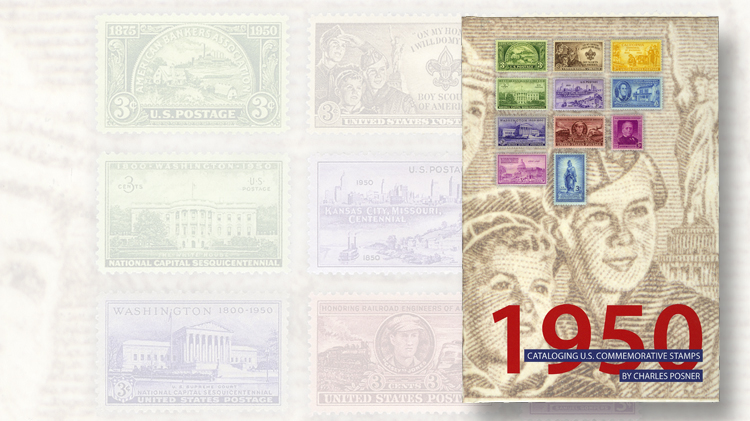 Charles Posner’s columns on U.S. commemorative stamps issued in 1950 are now reprinted in a hardbound book.

Collectors of modern United States (from 1950 on) will be pleased with the first of what likely will be a series of books on U.S. commemorative stamps published by the American Philatelic Society.

Linn’s U.S. Stamp Yearbooks are a series of books that offer collectors everything they need to know about the stamps issued during the year, including commemoratives, definitives, special stamps, and postal stationery.

The Yearbooks tell the story behind each stamp and include artists’ sketches and essays considered by the Citizens’ Stamp Advisory Committee before approval of the final design.

The series began with the stamps of 1983 under the authorship of Fred Boughner. George Amick took over as author with the 1988 Yearbook and continued to tell the stories of subsequent stamp issues for more than two decades until the final Yearbook was published for the stamps issued in 2010.

Although Posner’s book covers only commemorative stamps, it is a significant contribution to the U.S. stamp hobby.

Much like C. Belmont Faries (who wrote about new issues in SPA Journal, the publication of the now-defunct Society of Philatelic Americans), Boughner and Amick, Posner covers in detail the development of the stamp subject, the design, the history of the subject, photographs used for the design, essays,  first-day ceremony information, and the all-important technical details.

Posner also includes an introduction to the 1950s and to stamp collecting in those years.

Readers of the American Philatelist, the journal of the APS, will be familiar with Posner’s accounts of these issues. They are reprinted from the monthly magazine.