An address for the ages 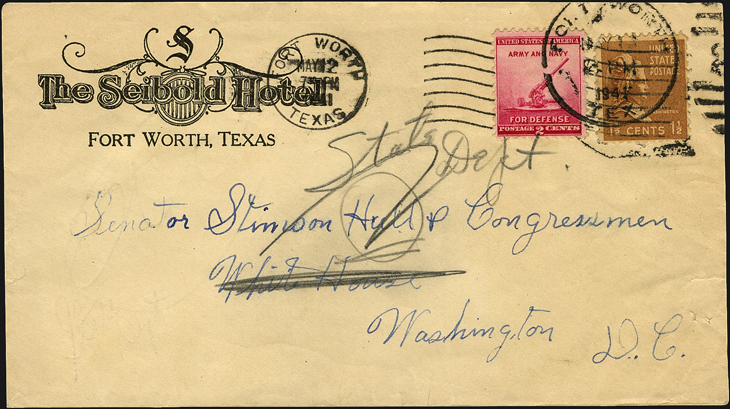 The sender of the letter in this envelope in 1941 was evidently covering all the bases with this comprehensive address.

If you want to make sure you have gotten your rant to the right people to hear it, here is the perfect address, from the May 2, 1941, envelope shown nearby: “Senator Stimson Hull & Congressmen/White House/Washington, D.C.”

I bet that the letter contained in the envelope (unfortunately no longer there) was from a person weighing in on the subject of involvement in Europe’s war.

Based on the markings on the envelope, it first went to the White House, and was sent from there to the State Department.

Easy to miss while focusing on the address is the fact that the letter was mailed twice; the first time with only one 1½¢ Martha Washington Prexie stamp (Scott 805).

It was returned for additional postage as the rate was 3¢, and a 2¢ National Defense stamp (Scott 900) was added on top of the original cancellation.

It is doubtful that Stimson or Hull ever laid eyes on the letter. It would have been tabulated as part of the effort to keep an eye on the sentiments of the public.