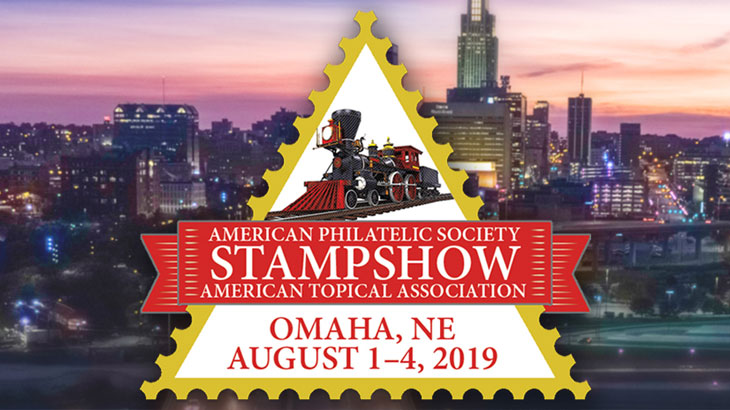 The show is co-hosted by the American Topical Association, which will hold its own National Topical Stamp Show at the same time and in the same location.

“The free event is co-sponsored by the United States Postal Service, which will issue four new stamps for Military Dogs at the show on Thursday, August 1,” according to the APS. “The USPS will also have a large retail presence offering a selection of current U.S. stamps for sale.”

More than 75 stamp and postal history dealers and auction firms are scheduled to participate in the four-day show. Editorial staff and others from Linn’s Stamp News and Amos Media Co. will be greeting visitors at a show booth during all four days.

The show will include a multi-session public auction by the California-based Harmer-Schau auction firm.

The APS Stampshow is the annual culmination of the World Series of Philately. The grand award-winning exhibits from dozens of qualifying national stamp shows over the past year will be on display in a head-to-head competition for the title of 2019 Champion of Champions.

In addition, both the APS and the ATA will hold its full national show exhibitions, with one grand award winner selected from each of these competitions. The winners in these two events will both qualify to compete for the 2020 Champion of Champions title, which will be awarded at the 2020 APS Stampshow at the Connecticut Convention Center in Hartford.

Rounding out the exhibition for the 2019 show are the youth exhibiting championship, a literature competition, and a court of honor display. Show visitors will be able to see the famous 1918 24¢ Jenny Invert airmail error stamp (United States Scott C3a) and other rarities in the court of honor.

The first-day ceremony for the U.S. Military Dogs set of four forever stamps is scheduled for noon Thursday on the show floor at the USPS area.

The APS will sell a cacheted hand-canceled show cover illustrated by artist Chris Calle, who has designed more than 200 postage stamps worldwide, including 25 for the United States.

Calle will be at the APS booth during the show and available to sign autographs, according to the society’s website.

Linn’s Stamp News editor-in-chief Jay Bigalke will be the featured speaker at the Tiffany Talk on Wednesday, July 31, at 5 p.m. His subject is “The Intriguing Side of Philately.” The talk will be followed by the Campaign for Philately reception at 5:30 p.m.

The third annual APS Stamp Soiree will take place Thursday at the Strategic Air Command and Aerospace Museum in Omaha. The ticket prices include a tour of the indoor facility, a reception and dinner, and transportation from the designated show hotel, the Hilton Omaha at 1001 Cass St., adjacent to the convention center.

On Saturday, the APS will hold its Hobby Honors event beginning with the awarding of exhibiting medals at 4:30 p.m.

A reception will take place at 6:15 p.m., and the honors dinner, which includes the major exhibiting awards and the Champion of Champions award, will begin at 7 p.m.

Many other meetings, events and seminars are scheduled during the four-day show.

Several stamp organizations will conduct board meetings and general membership meetings at the show. More than 30 stamp societies will have representatives at tables during the show, including national affiliates of the APS and the ATA, as well as local stamp hobby groups.

Additional show details are available on the APS website, including advance registration for the show and ticket details for dinners, the APS Writers Unit 30 breakfast on Sunday, and APS On-the-Road courses.