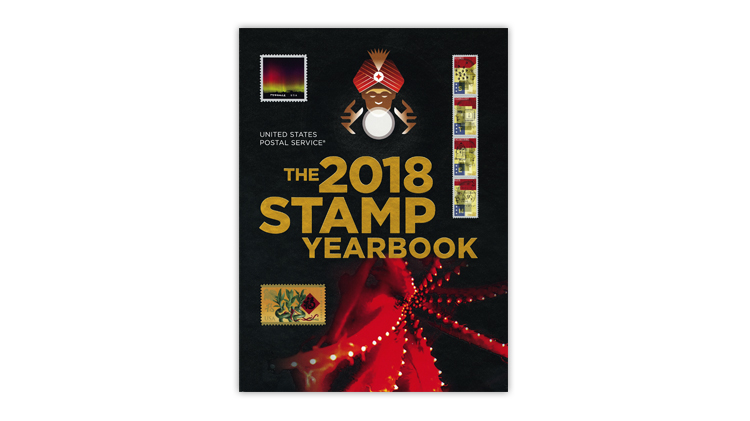 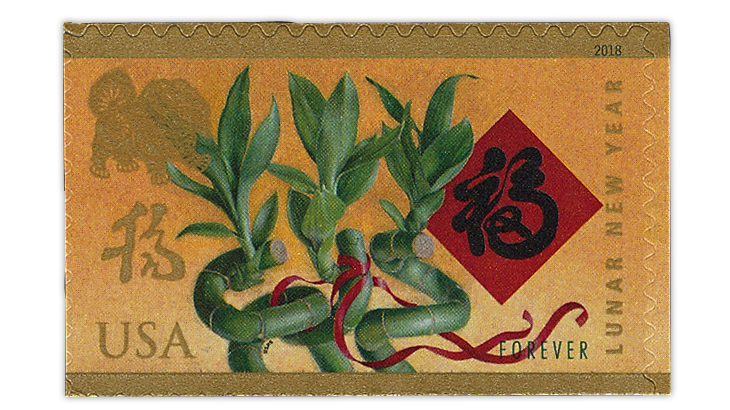 The Year of the Dog commemorative stamp of 2018 included in the Postal Service’s yearbook is scissor cut with damaged die cuts on three of the four sides of the stamp. 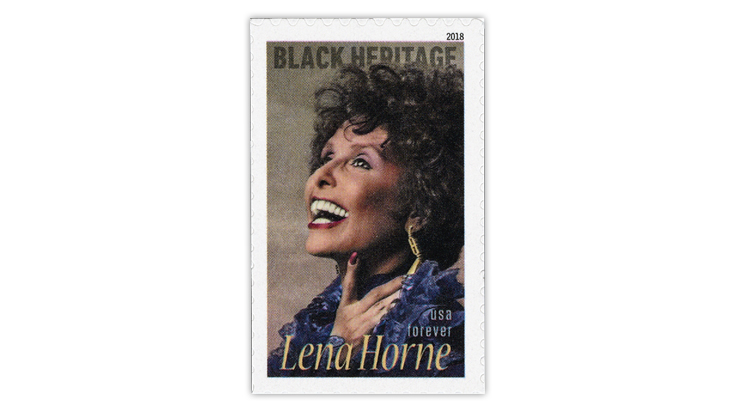 Even though the Lena Horne stamp has roulettes on the pane reverse that facilitate the removal of a single stamp, it was scissor cut from the pane with the die cuts lopped off.
Previous
Next

The United States Postal Service continues its tradition of publishing an annual stamp yearbook with The 2018 Stamp Yearbook released in January. I purchased the yearbook at my local post office for review.

The yearbook comes with a packet of “collectible stamps” of 2018; I will explore that packet later in this column. Additional packets of what the Postal Service calls “mail use” (definitives) and “high value” stamps can be purchased separately. Clear mounts are included for the stamp issues.

The yearbook is stunning from the hardcover to the 64 pages inside. On the cover, a special printing technique gives an aura to the fortune-teller’s globe.

A letter from Postmaster General Megan J. Brennan begins the book. “From the first American woman in space to beautiful American landscapes to first responders rushing toward danger, the 2018 stamps offer inspiration for every collector,” she wrote.

Two pages in the book open out further to highlight two souvenir sheets issued in 2018: the Art of Magic sheet with lenticular printing and the Sparkling Holidays Santa sheet. Unfortunately, only the Art of Magic sheet is included in the packet that comes with the book. The Sparkling Holidays Santa souvenir sheet is in the mail-use packet.

While I enjoyed the chapters about the subjects featured on the Postal Service’s stamps issued in 2018, things took a turn for the worse when it came to the stamps packaged with the yearbook. Many of these stamps were scissor cut. While this is not new for the Postal Service’s yearbooks, it is a lot more noticeable this time.

Only 10 of the stamp issues were in collectible condition (54 stamps, including 20-stamp panes of the O Beautiful and Hot Wheels issues).

Eight of the other stamp issues were close-cut and had the die cuts lopped off. Shown nearby is a single Year of the Dog stamp. Note the near straightedge at left and bottom, and the clipped die cuts at top.

Most — but not all — of the stamps that were scissor cut were issued without roulettes on the reverse to facilitate tearing a single or block from a pane of stamps. However, I was shocked to find scissor-cut examples of two stamps issued with the roulettes: Illinois Statehood and Lena Horne. Both of these stamps could have been easily removed from the pane.

Apparently, the Postal Service discovered that a strip of John Lennon stamps was needed for the yearbook after it had already assembled the stamps for the packet.

To recap, of the 81 stamps in the “collectible packet,” 27 (33 percent) were only good for postage, and 54 were in collectible condition.

The mail-use packet includes 52 stamps. Of these, four of the 11 issues are scissor cut and will need to be replaced. A full booklet of the Birds in Winter was included when a block of four would have sufficed.

The high-value stamp packet includes six stamps. I did not purchase this packet for review, but I would hope that all six stamps are in decent condition.

Overall, I would still recommend the purchase of the book for the coffee-table aspect of having something that might catch the eye of a noncollector. Also, having the stamp mounts in the correct sizes for the issues is quite helpful. Just know that you will have to purchase a few stamps to replace the damaged ones that are packaged with the book.

Here’s hoping that the Postal Service addresses the cutting problem in creating stamp packets for the 2019 stamp yearbook and beyond.