Antigua and Barbuda Bitcoin souvenir sheet issued in May 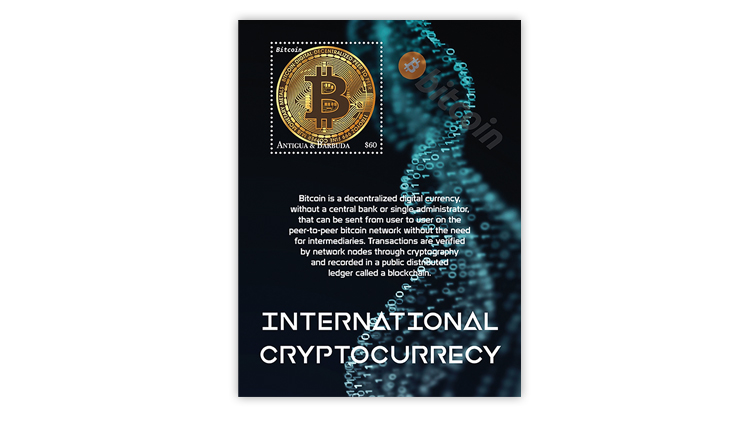 Antigua and Barbuda issued this $60 Bitcoin souvenir sheet in May.

The country of Antigua and Barbuda issued in May a souvenir sheet picturing the digital currency logo of Bitcoin.

According to Bitcoin, it “uses peer-to-peer technology to operate with no central authority or banks; managing transactions and the issuing of bitcoins is carried out collectively by the network.”

The new-issue agency Inter-Governmental Philatelic Corp. announced the souvenir sheet in a May 5 press release. The specific issue date for the sheet was not announced.

The souvenir sheet contains a single stamp denominated at $60 for “international shipments” according to IGPC, which also said that “there is no Crypto value, nor a crypto currency attached to the stamp value.”

This sheet joins others produced by IGPC that feature cryptocurrencies. In 2021, souvenir sheets from Tuvalu, St. Vincent and the Grenadines and Grenada showed Ripple, Ethereum and Dogecoin, respectively. Earlier this year, a souvenir sheet from the Marshall Islands showed Litecoin crypto.

IGPC said that these souvenir sheets are available from post offices in the issuing country, from stamp dealers and through its website.