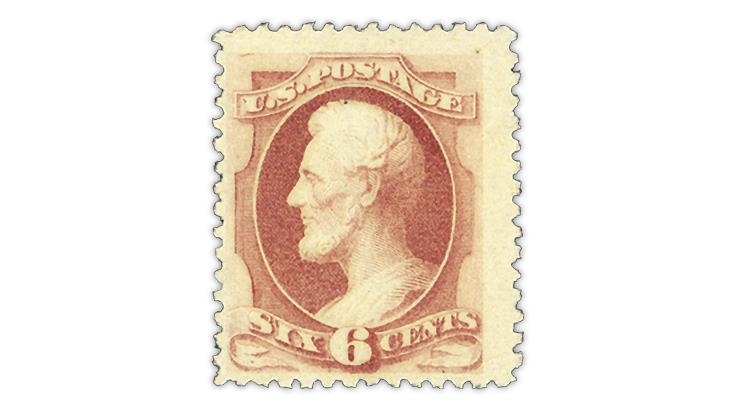 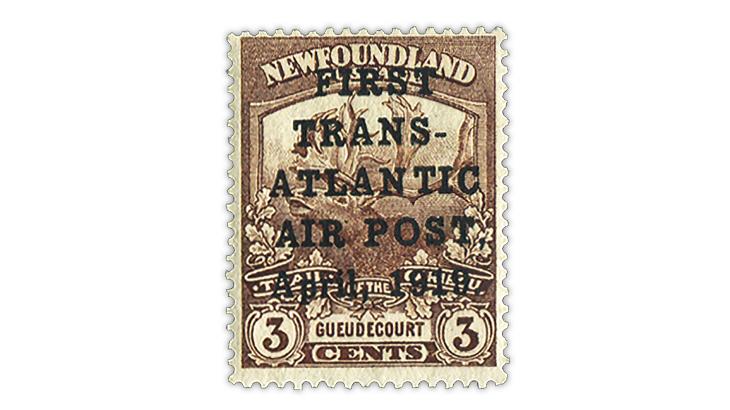 Newfoundland’s first airmail stamp was issued in 1919 and honors the first attempt to cross the Atlantic by airplane. Cherrystone is offering this example with an opening bid of $14,000.
Previous
Next

Cherrystone Philatelic Auctioneers will offer more than 1,000 lots of rare and desirable United States and worldwide stamps and postal history in its April 13-14 auction in Teaneck, N.J. This is Cherrystone’s first auction at its new location since moving from New York City.

“This 1,067 lot sale features United States and Foreign countries. The sale begins with over 400 lots of high quality U.S. singles including many rarities and graded items. The Foreign section includes Austria, France and Colonies, Germany, Italy and Colonies, Poland, Russia, Great Britain and British Commonwealth, China and South and Central American countries as well as an outstanding selection of the Treasures of Israel Philately, offered for sale at auction for the first time. Featured are the 1948 sheets of Doar Ivri, perf. and imperf. as well as uncut sheets of 300 of the First Festivals issue and the Postage Dues sets,” according to Cherrystone.

Among the 19th-century U.S. rarities is an unused 6¢ dull rose Abraham Lincoln (Scott 195) from the 1880 American Bank Note Co. special printing of the 1879 regular issue. This stamp, without gum as issued, has what Cherrystone describes as “fully intact perforations.”

Cherrystone notes that “only 26 certified examples have been recorded with most of them having some degree of faults.” Although the stamps from the 1880 special printing were valid for postage, no used examples are recorded.

Two expertizing certificates accompany the stamp: one issued in 1954 by the Philatelic Foundation and the other issued in 2018 by Professional Stamp Experts.

The PSE certificate assigns the grade of fine 70J to the stamp. The “J” designation indicates a stamp with jumbo margins. The 6¢ Lincoln special printing in the Cherrystone sale has jumbo margins at top and right.

Cherrystone lists this 6¢ Lincoln special printing with an opening bid of $25,000. The Scott Specialized Catalogue of United States Stamps and Covers values Scott 195 in very fine condition at $67,500. This value is italicized to indicate that limited market data is available to the Scott editors to establish a value.

Just one Newfoundland back-of-the-book issue is up for bids in the Cherrystone sale: a used example of the Canadian province’s first airmail stamp, which commemorates the 1919 first attempt of a trans-Atlantic airplane flight (Scott C1).

The stamp is overprinted “First Trans-Atlantic Air Post April, 1919” in five lines. The underlying stamp is the 1919 3¢ red brown Trail of the Caribou (Scott 117).

All examples of the airmail stamp, which some collectors call the Hawker, are signed “J.A.R.” (the initials of postmaster J.A. Robinson) on the reverse.

In its catalog description, Cherrystone provides a summary of this important airmail issue: “The stamp was overprinted for use on mail carried by Harry Hawker and Kenneth Mackenzie Grieve on their proposed non-stop flight across the Atlantic in a Sopwith biplane. The aircraft came down in the sea but the men were rescued and the plane salvaged. Only 200 stamps were overprinted, of which 95 were used on letters, 11 were given as presentation copies, 76 were sold in aid of the Marine Disasters Fund, the remaining 18 were apparently damaged and destroyed.”

“The plane and mail bag were salvaged five days later by an east-bound U.S. ship. And the envelopes were delivered to England by sea,” according to a detailed footnote in the Scott Classic Specialized Catalogue of Stamps and Covers 1840-1940.

Against a Scott Classic Specialized catalog value of $15,000, Cherrystone is offering this lightly hinged Newfoundland Hawker airmail stamp with a minimum bid of $14,000.

The Cherrystone sale wraps up with slightly more than 200 large lots and collections from the United States and other countries.

Crossing the auction block will be a large 1895-1986 collection of Scandinavian issues containing what Cherrystone describes as “better sets” from Denmark, Finland, Iceland and Norway, and “coils, booklets and more” from Sweden. Cherrystone is offering this collection “in an overflowing Minkus album” with a minimum bid of $3,500.

The catalog for the April 13-14 sale can be viewed and is available for download on the Cherrystone website, with online bidding options available. Information also is available from Cherrystone Philatelic Auctioneers, 300 Frank W. Burr Blvd., Second Floor, Box 35, Teaneck, NJ 07666.