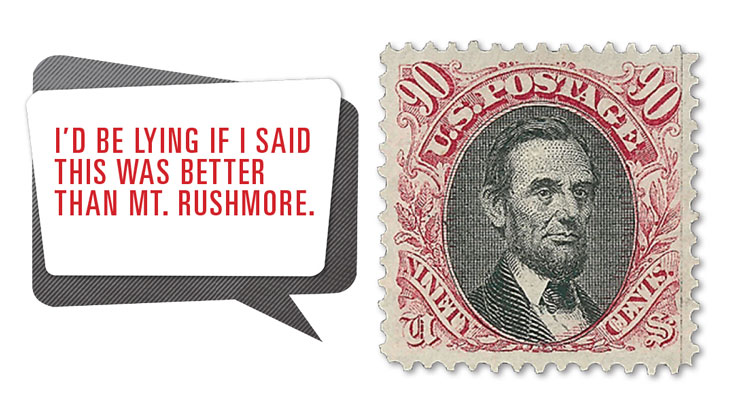 The winner of the nonphilatelic part of the April cartoon caption featuring the 1869 90¢ Abraham Lincoln stamp is Richard Wolf of Westminster, Md., who compared the transitory philatelic honor to the more permanent image carved into the side of a mountain

References to a well-worn line from the Gettysburg Address dominated the entries for our April cartoon caption contest featuring the 1869 90¢ Abraham Lincoln stamp (Scott 122).

Among my favorites is this comment on postal rates sent by Dave Schwartz of Commack, N.Y., “Four score and ten cents for one stamp! What would I be mailing, a cow?!”

Greig Best of Sacramento, Calif., suggested, “Cancel culture? I thought I’d only be cancelled if I were mailed.”

From Frank Schmitt of Rockford, Ill., comes, “Wow, this cancel culture movement is a real sock on the nose.”

This contest brought in an unusual number of serious, thoughtful entries, and, contrary to my usual practice, I am featuring a few as they are apolitical but worthy of some thought in these troubled times.

Gilbert Schaye of New York, N.Y., used this last line of a quotation attributed to Lincoln, “… but you can’t fool all of the people all of the time.”

George Schaetzle of Sheboygan, Wis., wrote, “I hope that my high denomination reminds people of the great sacrifices that were made to preserve the Union.”

Fred Steinberg of Newton, N.J., sent this entry, “In remembrance lies the roots of redemption; in forgetfulness, the roots of destruction.”

For the nonphilatelic part of the contest, the winning entry was from Rich Wolf of Westminster, Md.

Dale Stout of Colorado Springs, Colo., won the philatelic part of the contest with “90 cents?! The buck almost stopped here!”

“I’ve had enough! I’m leaving DC! If anyone wants me, I’ll be at my Gettysburg address,” by Nicholas D’Amico of Kingman, Ariz.

“Twelve score and five years ago our forefathers had no idea this stamp could now only mail a three-ounce letter!” from John Himes of Cypress, Calif.

“Just my luck. Of all the places The Simpsons could have chosen to live, why did they have to pick Springfield?” by Steve Kotler of San Francisco, Calif.

“This proves people will remember me four score and seven years from now!” by John Barrera of Concord, N.C.

“Ninety cents in my day is worth $17.76 today — more than enough for a letter to an ice house in Calcutta!” from Mitchell Zais of Columbia, S.C.

“How do you fit yesterday’s heroes into today’s culture? Take off their hats,” by Kenny Moore of Rocklin, Calif.

Thanks and a tip of the hat to all who entered. The next contest will be announced in the June 14 issue of Linn’s.

Johnny Cash steps up to the microphone for May cartoon contest