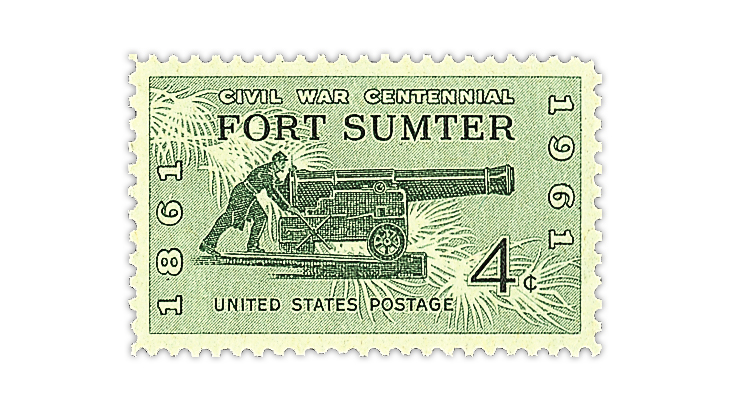 The cartoon caption contest image for April is the 1961 4¢ Fort Sumter commemorative in the Civil War Centennial issue. Entries must be received by April 22 for a chance to win a prize.

War and military preparations are much in the news these days, so let’s use the 1961 4¢ Fort Sumter commemorative (Scott 1178) as the cartoon caption contest stamp for April.

Though the stamp and the technology it depicts are tied to the American Civil War, you are not limited to lines that reflect that conflict. You can transpose the scene to any place and time that you choose.

Recognizing that there is nothing funny about war, certainly one of the ways that those who fight maintain their sanity is to joke. So it is in that spirit that you are invited to provide one or more lines that might be on the mind of the soldier or that he might be saying to a buddy.

Imagine yourself in battle or training and come up with a line about military life, the political underpinnings of the war, what the cannon might be pointing at, the folks back home, stamps or stamp collecting, or anything else that comes to mind.

Entries must reach me no later than April 22.