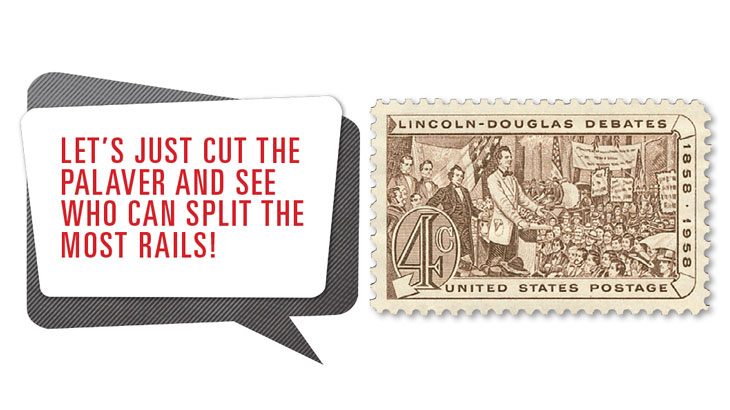 The winner of the philatelic line in the April cartoon caption contest is Robert Harvey of Rome, Pa., who used the 1958 4¢ commemorative stamp featuring the Lincoln-Douglas debates of 1858 to propose a new way of settling political contests, one that woul

The cartoon contest stamp for April was the 1958 4¢ commemorative stamp celebrating the Lincoln-Douglas debates leading up to the 1858 contest between them for a Senate seat from Illinois. Lincoln lost, but gained national recognition as a result of his performance. It also led to his being nominated for and winning the presidency in the 1860 election.

Of course the coronavirus pandemic is on everyone’s mind, so it is not a surprise that a majority of the entries played off that subject. The most inventive came from Wes Heacock of Port Angeles, Wash., who represents this group of entries with “Everyone please keep your distance. Six feet away is OK, or six feet under if you blunder.”

Another pandemic theme was stimulus money. Laura and Tom Tomaszek of Cedar Rapids, Iowa, cashed in with, “The good news is you each get $1,200 from the government stimulus. The bad news is it will be paid in Lincoln pennies!”

Other Linn’s readers saw the makings of a first-day ceremony in the scene on the stamp. From among those entries was this one from Casey Kielbasa of Cheektowaga, N.Y., “At least my issuance ceremony wasn’t cancelled!”

Lincoln was a no-nonsense kind of guy, so the winning nonphilatelic line by Robert Harvey of Rome, Pa., seems possible.

The winning philatelic line by Dave Schwartz of Commack, N.Y., plays a bit loose with the year dates in which events occurred, but it’s an interesting thought: “And now up for sale is this extremely rare 1867 15¢ ‘Z’ Grill stamp, only 2 exist … Hey wait! That’s me on the stamp!!!!”

“I thought this white sport coat and pink carnation would be popular, but Wow!, what a reception!” from Jack Place of Lampe, Mo.

“Gentlemen, let me assure you this is the truth. Speaker Pelosi informed me just last week,” by Rick Howell of Bedford, Texas.

“I’m glad to be in … Where are we?” from Stephen Rae of Napa Valley, Calif.

“I hope that guy Sanders doesn’t run as a third party write-in candidate!” by Bennett Bardfeld of Vineland, N.J.

“And lastly, let us stamp out the idea of divided houses,” sent by Fred Zinkann of Montgomery, Ill.

“Tonight we will debate the pros and cons of a merger of the Lincoln Motor Company and the Douglas Aircraft Company,” from Steve Kotler of San Francisco, Calif.

“Wouldn’t it be more fun if we were asked stupid questions and talked over each other?” from Richard Wolf, sent by email.

Thanks and a tip of the hat to all who entered. The next contest will be announced in the June 8 issue of Linn’s.