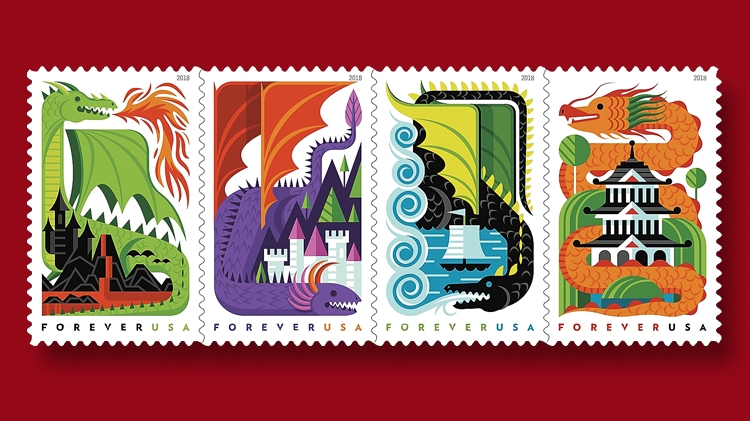 Dragons will swoop into Columbus, Ohio, from Aug. 9-12 when the combined Stampshow/National Topical Stamp Show opens this year’s event with the theme, “Here Be Dragons,” inspired in part by the United States Postal Service’s Dragon forever stamp issue at the show.

The combined show is a first for the philatelic community and is made possible by the coordination between the American Philatelic Society and its largest affiliate, the American Topical Association.

Stampshow 2018, the nation’s largest annual postage stamp show and exhibition, takes place in Exhibit Hall B at the Greater Columbus Convention Center in Columbus. Show hours are 10 a.m. to 6 p.m. Thursday to Saturday, and 10 a.m. to 4 p.m. Sunday. Admission is free, but all attendees must register.

In addition to offering more than 900 frames of world-class exhibits, approximately 110 dealers, a first-day-of-issue ceremony and an auction by Harmer-Schau, Stampshow serves as the annual summer convention of APS members.

The APS membership meeting and town hall is set for 9 a.m. Saturday.

The first-day ceremony for the four U.S. Dragons forever stamps will take place on the opening day, Thursday, Aug. 9, at noon.

The USPS booth will include a virtual reality display, and the show also will be visited by medieval characters willing to share tales of dragon lore with visitors and posing for pictures with them as well.

The APS will offer “Ye Olde Passport,” a free themed guide to the sponsor and society booths. Designed to encourage exploration and collection, the passport has spaces for the new Dragons stamps, show cancels and society stickers.

The United Nations Postal Administration will be on hand with a full array of its latest products at the show. Also, Nordica, which represents several Scandinavian and northern European postal agencies, will be at the show.

The Tiffany Talk featuring Elliot Gruber, director of the Smithsonian’s National Postal Museum, will take place Aug. 8 at 5 p.m., the evening before the show begins. The Campaign for Philately reception will be held after the talk.

The National Postal Museum will also have a display at the show.

The celebration banquet on Saturday evening is a two-tiered event. First, most show awards will be presented at the open medal-level ceremony that begins at 4:35 p.m. Saturday, followed by a cocktail party. Tickets are required for the banquet, to begin at 7 p.m., at which the show’s and society’s premier awards will be announced.

For more information on tickets and the show in general, visit the APS website. You can also register in advance at the show website.

For instructions on how to download the Stampshow mobile app for iPhone and Android, visit https://aps.buzz/DragonApp.

The mailing address of the APS is 100 Match Factory Place, Bellefonte, PA 16823.