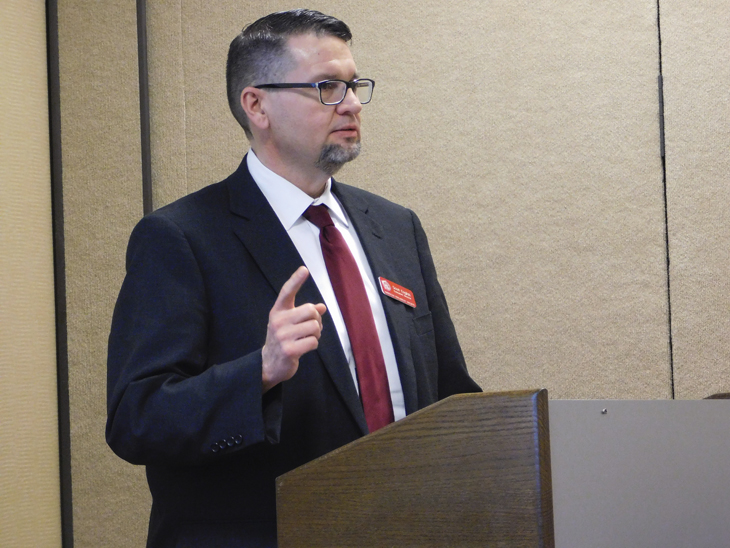 American Philatelic Society Executive Director Scott English addresses the APS board during its Jan. 28 meeting in Atlanta, Ga. English laid out a five-year strategic plan for the society at the meeting, which the board approved.

Included are plans to eliminate the mortgage debt on the American Philatelic Center in Bellefonte, Pa., to complete the renovation of the center by 2018, and to grow the APS and the APRL as a greater national presence to members and the general public.

The plan, described in detail by APS Executive Director Scott English during the Jan. 28 APS board meeting in Atlanta, Ga., begins with a significant $10 million target.

That’s the amount both groups intend to raise over the next 10 years to pay down the mortgage debt for the American Philatelic Center in Bellefonte, Pa., finish construction of the library at that location, grow their education programs, advance APS and APRL accessibility, and improve membership services.

The plan English presented was crafted with the Joint APS/APRL Strategic Planning Committee, consisting of APS board members Ken Nilsestuen, Dan Walker and Mick Zais; APRL board members Roger Brody, Bruce Marsden and Chuck Wooster; and Steve Zwillinger, who served on both boards.

Additional input came from other associated committees and teams, including APS and APRL staff, board members and trustees, and members of both organizations.

The plan was approved by the APS board at the end of the Jan. 28 presentation.

English will now present the plan to the APRL board for its approval.

The areas of focus for the plan are broken into four major categories: sustainability, education, accessibility, and membership.

The $10 million goal is the key to a plan to make the two organizations debt free by 2025.

“I’m not worried about the financial viability of the organization,” English told the APS board. “We are a relatively healthy organization in terms of cash on hand, cash flow into the organization, our debt is manageable, we have a diversified revenue stream, the rental properties that we have in Bellefonte are at full capacity and will continue to be so for the short term anyway, but I am optimistic that long term our leasing capacity will stay at least 90 percent. Assuming that no major market crash happens, I think we’re in good stead.”

The plan first calls for fundraising efforts to reduce the need to borrow from the APRL’s approved credit line to complete construction on the library, to the tune of $600,000.

Later goals are to eliminate the mortgage debt held by the APRL, and to make APS circuit sales, Internet sales, and expertizing services self-sustaining in five years.

“Throughout the past five years, these services have operated at an estimated $478,346 loss to the APS,” according to the strategic plan.

“Over the next five years, one of the purposes of the APS should be to ensure these services are delivered in the most cost-effective manner possible, and that they are not subsidized through membership dues.”

The actions adopted include increasing expertizing fee revenue by 5 percent annually, and evaluating fees and costs to find where the financial losses occur.

Recognizing the popularity of circuit sales — where members view stamps in books mailed to their homes and select items they wish to purchase — the APS has initiated discussion of a joint project merging Internet sales and circuit sales, and completing a new web-based circuit sales system in February of this year.

On the subject of education, English paused and said, “This is an area where we talk an awful lot and we do very little.”

The new strategic plan calls for an increase in learning opportunities “for collectors of all skills and ages,” and for a promotion of education through philately.

To develop and design youth programs that meet public classroom standards, the APS plans to partner with the National Postal Museum and the United States Postal Service, with an eye toward reviewing the existing APS Stamps Teach program.

Additional goals include establishing performance measures for the youth programs, increasing participation in APS member education courses such as the On The Road courses and the APS Summer Seminar, and creating an on-demand educational library of short videos.

The plan also notes that a Master Philatelist certificate program planned in 2010 has not been implemented, and states that as the demand for such certification remains, the APS should move forward with the program by developing course requirements and curricula for certificate courses.

The American Philatelic Center, as the headquarters for both organizations, serves as a key to increasing accessibility to these groups for both members and the general public.

The renovation of the converted match factory in Bellefonte, consisting of 18 buildings on six acres, has continued since the property was purchased in 2002.

The plan’s first stated goal in strengthening accessibility is completing the renovation of the American Philatelic Center by 2018, which includes a planned completion of the library construction in spring, and a grand opening of the library space in October.

Once that is completed, the next step is to increase access to the philatelic literature and research for members of both organizations and for the public at large.

One of the most consistent concerns for the APS has been its annual declines in membership. Membership at the end of 2015 was 31,229, reflecting a decrease for the year of 791 members.

The strategic plan calls for strengthening recruitment through the existing APS chapters and affiliates to form “a stronger philatelic grassroots network.”

English added to this idea by stating, “We are an organization of clubs. We are not the biggest of the stamp clubs that exist in the U.S., and so we’ve got to redefine that relationship back to where we started, and we’ve got to continue to have a daily presence in the lives of people who join the APS.”

A second stated goal is to use strategic partnerships to increase the reach of both organizations beyond current memberships “and provide value-added, non-APS services to APS membership.”

Partnerships with other organizations engaged with collectors in the stamp hobby provide “opportunities to leverage the services each provides for the benefit of their different constituencies or for the good of philately.”

One aspect of the plan is to build partnerships “that will allow APS to co-locate one or both of the APS national shows with another national organization — inside or outside the hobby.”

English continued on to the next goal by saying, “This one is the single most important thing this organization can do and can do today, and can do for no cost: and that is engage the membership.”

The plan calls for the society to seek out increased feedback opportunities for current, former and potential members.

Also on the slate are efforts to increase and improve contact and solicit feedback from current and former APS members with the implementation of online town hall meetings, an “Ask an Expert” online forum, a survey, and a redesign of the APS/APRL website.

English concluded his presentation by acknowledging the input of society members, and with thanks to all who contributed to the completion of the joint strategic plan. He closed with a passionate appeal that the plan be adopted by the board and that it be fully implemented.

“This has got to become our reason for being,” English said. “I want you to adopt it, and I want it to be our operations for the next five years.”

The board passed the plan with a unanimous vote.