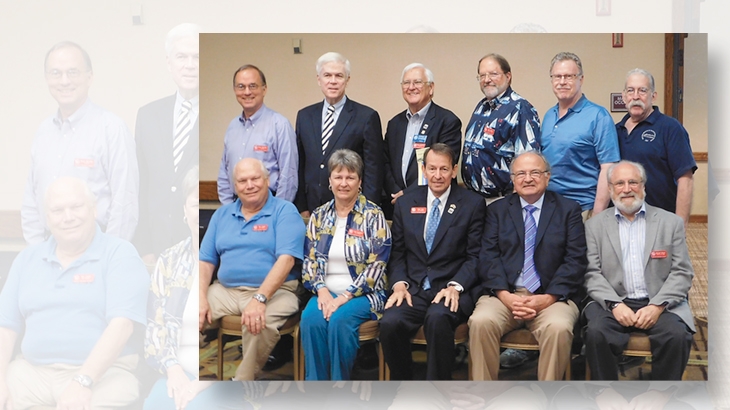 Bob Zeigler, seated at lower left, is the new American Philatelic Society president. He was elected by the APS board of directors, shown here, to replace Mick Zais (seated at center in the front row). Zais resigned May 17 to fulfill a U.S. government posi

Robert Zeigler is the new president of the American Philatelic Society.

Zeigler was selected for the presidency by a vote of the APS board of directors during a meeting held May 23 as a telephone conference call.

Zeigler was a member of the society’s three-person board of vice presidents when he was chosen fill the position vacated by Mick Zais, who was elected president by a vote of the APS membership in 2016.

Zais resigned May 17 when he was confirmed by the United States Senate for the position of deputy secretary of the U.S. Department of Education.

Zeigler will complete the term to which Zais was elected, through August 2019.

The Wednesday meeting was called to order at 5 p.m. EDT by vice president Trish Kaufmann.

Following a vote to adopt procedures for nominating and electing the new president, the floor was open for nominations.

Zeigler was nominated for the presidency by board member Rich Drews.

Also nominated to fill the vacancy was board member Peter McCann, whose name was placed into nomination by APS secretary Steve Schumann.

Both of the nominees then addressed the board for about five minutes each.

McCann previously served 12 years on the APS board, including as a member of the board of vice presidents, and two terms as president of the society.

“We need to work on building consensus on the board,” McCann told the directors. He suggested more meetings to discuss issues, plans and strategies, including in-person meetings. He also stressed the importance of interaction with the American Philatelic Research Library’s board of regents.

Prior to his 2016 election as vice president, Zeigler also served a term on the board as a director at large, and on several APS committees. He spoke of his concerns about declining APS membership. He praised efforts to appeal to younger collectors and to use technology for outreach, but he added that outreach to older collectors should not be neglected.

Zeigler also suggested a greater emphasis on the Tiffany fund as a means to increase donations to the society and build up its endowment.

The vote taken by Schumann was six votes for Zeigler (by Drews, Kaufmann, Marsden, Schwartz, Shapiro and Zeigler), and four for McCann (by Bloom, McCann, Reinhard and Schumann).

Discussion following the vote focused primarily on the process for selecting a replacement for Zeigler on the board of vice presidents, and also choosing a new member for the board of directors.

The next step is for the president to propose an appointment for the board, with confirmation by the board of directors to follow.