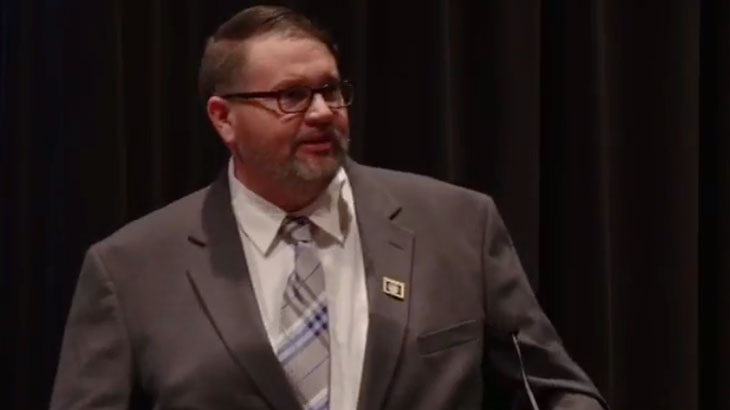 The American Philatelic Society has retained the services of its executive director, Scott D. English, for at least another two years.

“In November I was surprised with a gift,” English said at the Feb. 14 reception for the APS Campaign for Philately in Mesa, Ariz. “And the gift was that the board met and asked me to stay.”

His contract with the society was scheduled to expire in August, and English said he wasn’t expecting to have the contract conversation with the APS board of directors so soon.

“A contract offer came to me and I accepted,” English said. “And what that means is that through August of 2021, I’m on the hook for that long.”

English was hired following a lengthy search process in 2014-15, replacing Ken Martin, who was named the society’s chief operating officer. English was introduced to APS members Aug. 20-23, 2015, during the organization’s annual summer stamp show and convention in Grand Rapids, Mich.

He received a new contract from the APS board in August 2017.

Prior to accepting the position with the APS, English was involved in the Washington, D.C., political scene as chief of staff for U.S. Rep. Mark Sanford of South Carolina, and had also worked as chief operating officer for South Carolina’s Department of Education.

English told those assembled at the fundraising reception that he had been welcomed into philately like a member of the family.

“I can’t for the life of me imagine why I would leave this to go back to something else, no matter what it is.”

The board of directors met Thursday prior to the opening of APS Ameristamp Expo, held Feb. 15-17 at the Mesa Convention Center.