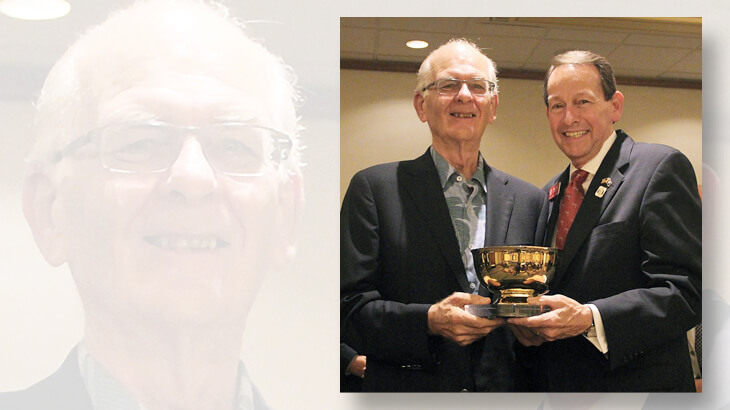 Richard C. Malmgren has been named the winner of the 2016 Benjamin and Naomi Wishnietsky Multi-Frame Champion of Champions award.

The top annual prize for United States philatelic exhibitors was awarded to Malmgren Aug. 6 at the American Philatelic Society Stampshow, held Aug. 4-7 at the Oregon Convention Center in Portland, Ore.

His exhibit titled “Hawaii Foreign Mail” was judged the best of 27 competing World Series of Philately exhibits at the Portland show. These multiframe exhibits had each claimed the grand award at one of the APS national shows held during the 12 months from July 2015 to June 2016.

It is the second Champion of Champions award for Malmgren, who won in 2010 at Richmond, Va., for his exhibit “Hawaiian Postage Stamps.”

The postal history exhibit is a study of the development of Hawaii’s foreign mail from 1820 until the islands were made a U.S. territory in 1900, according to the exhibit’s introduction.

Much of the exhibit is arranged by rate period, primarily U.S. treaty rates.

“While the exhibit’s emphasis is covers originating from Hawaii,” the introduction explains, “examples of both incoming mail as well as mail sent through Hawaii to other destinations are displayed.”

The exhibit’s introduction page includes a cover described as the earliest privately held missionary cover sent from Hawaii, with a date of May 14, 1820.

Malmgren’s prize was awarded to him by Mick Zais, who became president of the American Philatelic Society earlier the same day.

Have lasting fun: how to create an exhibit and enter it into a show