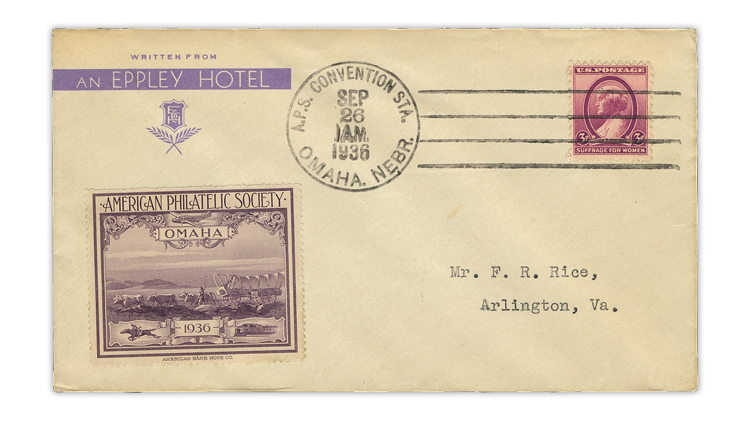 The American Philatelic Society last held its national convention in Omaha, Neb., in 1936. This cover, sent by a collector using hotel stationery, bears an “A.P.S. Convention Sta.” postmark plus a label that was available at that stamp show.

The American Philatelic Society and the American Topical Association are teaming up to present Stampshow 2019 in Omaha, Neb. The show will take place Aug. 1-4 at the CHI Health Center Omaha, 455 N. Tenth St.

The story about the show appears in the July 15 issue of Linn’s.

The last and only other time the APS was in Omaha for its national convention was in September 1936. Now, 83 years later, the show is back.

The 1936 exhibition took place Sept. 24-27. A report published in the Oct. 3, 1936, issue of Western Stamp Collector noted the show’s exceptional exhibits of the United States 1862 2¢ Black Jack stamp and of Heligoland stamps, among others.

For that APS convention, the American Bank Note Co. produced a single design of a label and printed it in four different colors. The label’s vignette pictures oxen pulling a Conestoga wagon. The frame includes images of an airplane, pony express rider and train engine. It is quite the sharp-looking cinderella.

The label is affixed to the cover shown nearby, sent by a collector using an envelope with a corner card from “An Eppley Hotel.” The cover was postmarked Sept. 26, 1936, with the “A.P.S. Convention Sta.” cancel.

I enjoy this souvenir because it reminds me of something I’ve done many times before (and I’m sure other collectors have, too): that is taking the stationery the hotel has for guest use and creating philatelic souvenirs.

If you haven’t made plans to attend Stampshow 2019, I highly recommend doing so. I’ve been to Omaha more than once and was impressed with the city.

And, if you want to take excursions outside of the city, you may want to consider a visit to the state capitol in Lincoln (approximately 60 miles from the show) and to Boys Town (12 miles from the show). Boys Town is home to the world’s largest ball of stamps and the Leon Myers Stamp Center, where you can purchase items for your collection.

For additional information on Stampshow 2019, visit the show website.