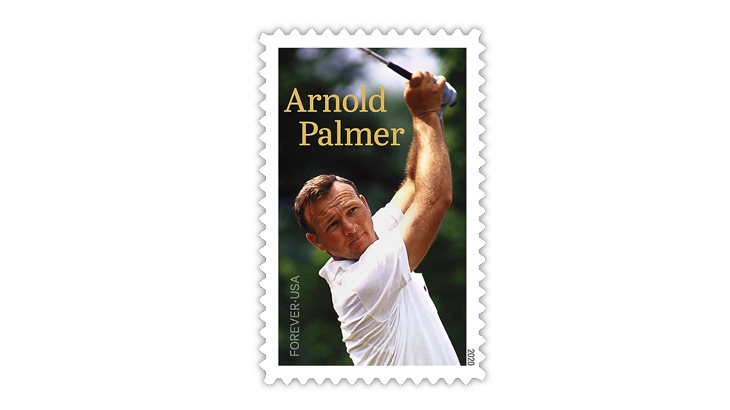 The forever stamp honoring Arnold Palmer will be issued March 4. A ticket to the Arnold Palmer Invitational is required to attend the first-day ceremony.

The stamp was revealed late last year, but without details about the date of issue.

A first-day ceremony for the nondenominated (55¢) commemorative will take place at 11:15 a.m. at the Arnold Palmer Invitational on the driving range at the Bay Hill Club and Lodge, 9000 Bay Hill Blvd., in Orlando.

According to the Postal Service, “The stamp dedication ceremony at the Arnold Palmer Invitational Presented by Mastercard is open to ticketholders.”

Single-day ticket prices for the tournament, according to the website at arnoldpalmerinvitational.com, begin at $60, with a 10 percent discount if Mastercard is used to purchase the ticket.

However, the website also states: “Complimentary Any One Day tickets are available for all United States active duty and military retirees, plus one guest. Must show Department of Defense ID.

“Discounted tickets are also available for U.S. non-retired veterans, plus one guest at $27.50 per ticket (valued at $55 per ticket).”

There is a fee for parking.

Additional ticketing and ceremony reservation details can be found online at usps.com/arnoldpalmer.

The stamp features a color photograph by James Drake of Palmer at the 1964 U.S. Open at Congressional Country Club in Bethesda, Md.