Arnold Palmer is honored at first day of issue event 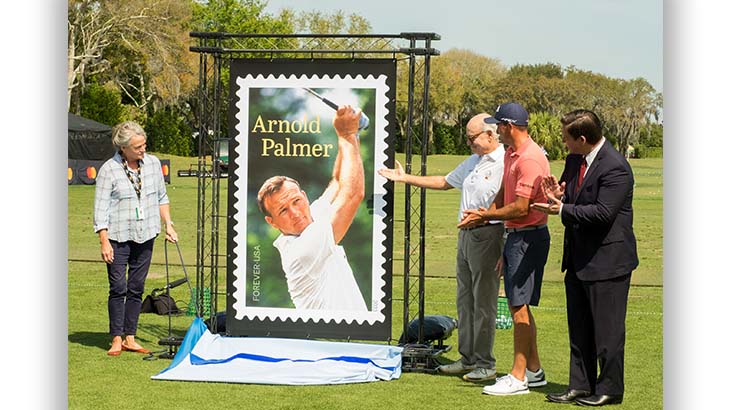 “One of the things everyone loved about my grandfather is how accessible he was, and that’s what we want to keep going here,” Sam said. “We want to keep that feeling alive. We want you to come here to the Arnold Palmer Invitational every year … and enjoy this wonderful event.”

“It is my pleasure and honor to be here to celebrate the life of Arnold Palmer — a great American, not just a great golfer, because his life was beyond golf; he was a highly successful businessman and a dedicated philanthropist,” Martinez said. “Arnie the man can best be captured by being honored with the two highest civilian awards that this nation grants: The Presidential Medal of Freedom and the Congressional Gold Medal. That was Arnie.”

Martinez was joined by Amy Saunders, chair of the Arnold & Winnie Palmer Foundation, to unveil the stamp.

To conclude the celebration, Lerner called many people forward to tee off.

“Arnold Palmer touched so many different facets of life, and we have different people gathered here to represent that,” Lerner said.

Those who stepped up to the tee included Sam Saunders, who drove the ball from his granddad’s favorite spot; past PGA champion Marc Leishman; Martinez, representing Palmer’s continued legacy; Mayor Dyer, who served as an Arnold Palmer Invitational ambassador; a member of the United States Coast Guard, representing Palmer’s past service and passion for the United States; a doctor from the Arnold Palmer Hospital for Children; and more.

The Arnold Palmer photo used on the stamp was taken by James Drake at the 1964 U.S. Open at Congressional Country Club in Bethesda, Md. The stamp was designed by USPS art director Antonio Alcala.