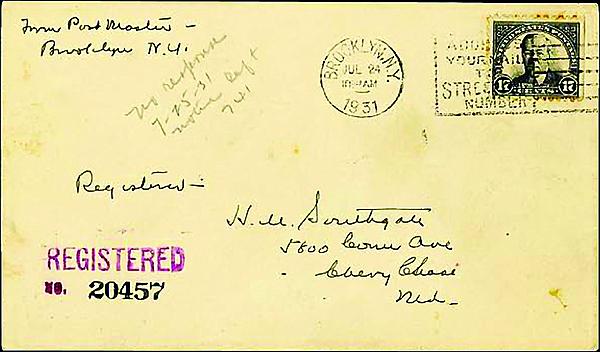 This early use (or predate) cover for the 1931 United States 17¢ Woodrow Wilson stamp (Scott 697) will be offered at auction by Kupersmit Philatelic Auctions during the Americover show sponsored by the American First Day Cover Society. The cover is part of the Chesney collection of earliest documented uses.

The Washington Press has been a major supporter of the American First Day Cover Society since the founding of the AFDCS in 1955. Washington Press produces ArtCraft Cachets, a staple of FDC collecting.

The most visible sign of support is that the company always has the advertisement on the back cover of First Days, the official journal of the society, and it has “first call” on the back cover advertising of every other AFDCS publication. Washington Press almost always exercises that option. Other philatelic companies have asked about that ad location, and have been told that it is not available.

In the early days of the AFDCS, most of its leaders lived in New Jersey. Washington Press was in the Garden State, too, and still is. That made it easy to forge close ties.

That is a major reason why the AFDCS is holding its 2014 Americover annual show and convention in New Jersey, Aug. 15-17, at the DoubleTree Somerset Hotel.

As detailed in the April 28 Linn’s, this is ArtCraft’s 75th anniversary, and that is being celebrated as the theme of the Americover show.

ArtCraft is also producing the convention cachet this year and will have a booth at the show for the first time in many years.

Also for the first time in many years, Americover will host a major public auction. Kupersmit Philatelic Auctions will sell the Chesney collection of earliest documented uses and part of the Maslow collection of first-day covers and postal history. An example of an early use from the upcoming auction is pictured here.

Americover also will feature a dealer bourse, and another at which cachetmakers can only sell cacheted FDCs they have produced. The announcement of the winners of the annual cachetmaking competition will take place, and the show will host its World Series of Philately exhibition.

Unfortunately, the AFDCS was not able to obtain a United States first-day ceremony for its show. However, a week later and less than three hours away, the American Philatelic Society’s Stampshow will have three of them, for the United States, United Nations and Marshall Islands. The U.S. stamp issue is the Hudson River School stamp set to be issued Aug. 21.

It should be an FDC-intensive two weeks.