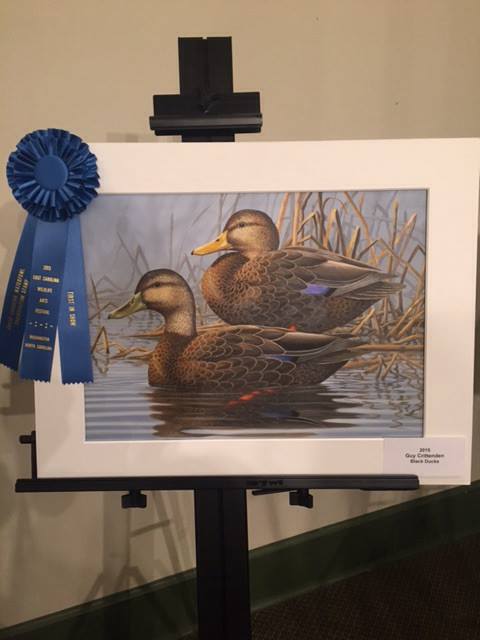 This painting of black ducks painted by Virginia artist Guy Crittenden will be the image on the 2015 duck stamp.

The following is a release from the North Carolina Wildlife Resources Commission:

Crittenden’s vivid portrayal of a pair of black ducks will be featured on the 2015 North Carolina duck stamp. The painting was unveiled on Feb. 5 at the 20th Annual East Carolina Wildlife Arts Festival and North Carolina Decoy Carving Championships in Beaufort County during a sponsors’ reception at the Turnage Theater.

Signed and numbered regular edition prints with mint stamps of the winning portrait will be available July 1 from the N.C. Wildlife Resources Commission’s N.C. Wild Store for $145.

“2011 was my first year of entering competitions and I got hooked,” Crittenden said. “It’s a fun thing to be part of the competition and I never thought I’d win here so soon. It’s a thrill.”

Although he only began entering his paintings in competitions a few years ago, Crittenden has been painting waterfowl and nature scenes since his youth and sold his first painting at age 13. He is avid outdoorsman, who enjoys fishing, boating, skiing and hunting — mostly waterfowl but anything that flies from turkeys to doves to quail.

Crittenden was one of 35 wildlife artists from 22 states to submit entries into this year’s competition, which began in 2008 as a partnership between the Commission and the East Carolina Wildfowl Guild. The guild sponsors the annual winter wildlife festival.

Each year, the Commission specifies five eligible species and related habitats for the competition. This year, artists could submit paintings of tundra swans, black ducks, Atlantic brant, gadwalls or bufflehead.

In addition to Crittenden’s painting, the other top entries selected by a panel of judges were unveiled during the reception:

Proceeds from sales of the print and stamp support the Wildlife Resources Commission’s Waterfowl Fund, which generates revenue for the conservation of waterfowl habitat in North Carolina.