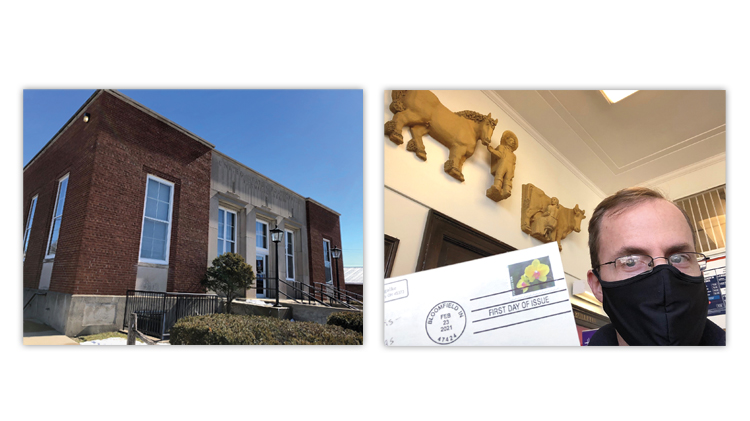 During a recent visit to the Bloomfield, Ind., post office, Linn’s and Scott catalog editor-in-chief Jay Bigalke not only received a new first-day-of-issue postmark, but he also discovered an interesting work of art.

On Feb. 22 I traveled to this rural Indiana town near Bloomington to obtain the first-day-of-issue postmarks for the Garden Beauty forever stamps issued that day. There wasn’t a ceremony, but the postmaster and clerk were both very helpful in selling the stamps, supervising my canceling of covers and then mailing the postcards I sent to friends and family.

The post office was dedicated in 1938 according to its cornerstone, and from the exterior architecture I had expected to see a mural inside.

Instead, above the postmaster’s door was a terra-cotta relief sculpture by Lilian Swann Saarinen called Waiting for the Mail. The work includes a man with a horse and a woman milking a cow. According to various sources, the sculpture was installed in 1941, three years after the post office opened.

So the next time you are in a town that has a post office like Bloomfield’s, stop in — who knows what sort of artwork treasure you might see.