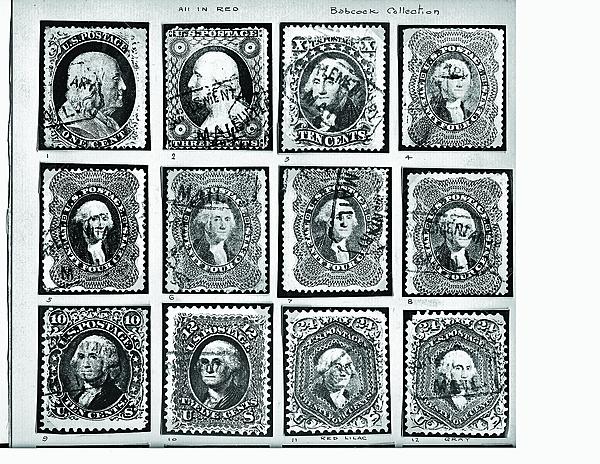 One of the nearly 10,000 black-and-white photographs in the Ashbrook archives, now available online at the website of the United States Philatelic Classics Society. This example shows 12 stamps, each marked with a red “supplementary mail” box marking.

The website of the United States Philatelic Classics Society now provides access to the Stanley Ashbrook collection of approximately 10,000 black-and-white photographs of classic stamps and covers.

The archive photographs can be viewed on the society’s website and are available for anyone interested to review and study.

These pictures, not to be confused with the photographs included with Ashbrook’s Special Service, the biweekly newsletter published in the 1950s, were used as a personal reference by Ashbrook, the preeminent postal historian of his time as well as the author of numerous articles, books and pamphlets regarding various topics of classic U.S. philately.

These newly published photographs were taken by Ashbrook, an accomplished photographer, of objects sent to him for study. The photos were kept by him as a private reference, and he often marked them with details that were useful to him, such as camera settings and the types of lens filters used.

While their existence was known for many years, tracking down these photographs was akin to solving a mystery, according to Mary Wagshal, who made all of this material available for the society to record and share.

She is the widow of philatelic collector and researcher Jerome S. “Jerry” Wagshal, who obtained the photographs decades after Ashbrook’s death in 1958, and after many years of sleuthing to determine their whereabouts.

After Ashbrook’s death, the collection was auctioned by H.R. Harmer in 1958.

Following one clue after another over the course of several years led Wagshal to the estate of Phillip Rust Sr., a client of Ashbrook who had reassembled the photographic collection.

Wagshal was able to purchase the material, intending to make sure it was shared with the collecting community.

“When we got the material from the Rust estate, the items were still in the packaging [from the auction house],” Mary Wagshal told Linn’s Stamp News.

Rust had purchased much of the material at the H.R. Harmer auction, she explained, but he also obtained some of it from other auction buyers.

Mary Wagshal provided Michael Perlman access to the photograph collection with the stipulation that the images would be made available to philately at large.

At his own expense, Perlman had high resolution scans made of all of the photographs and donated these scans to the society.

The society contracted with Wyzaerd Consulting Inc. to format the photographs and post them online.

The society reports that it is now exploring the technology for adding electronic tags to each photo to allow organizing by groups, such as Scott catalog number, postal treaty, origin, destination, and so on.

Mary Wagshal expressed her gratitude to Perlman for making her husband’s dream of sharing this reference material a reality.

The Classics society also thanked Perlman in a press release announcing the availability of the images, and expressed thanks to the Wagshals as well for generously providing the material for the society to share.

The Ashbrook archives can be viewed through a link at the society’s website, www.uspcs.org.

Visitors using an older Internet browser can examine individual items by accessing with a right-click, then opening the image in a new window.

The physical photographs — the source material — will be donated to the American Philatelic Research Library, said Mary Wagshal.

“These are photographs 50 or 60 years old; many are in great shape but some are deteriorating, and they really need to be in a proper environment,” she said.

The library has the ability to keep the photographs in the correct physical environment, she said, noting that some of the items pictured in the photographs are unfamiliar to some of the country’s top philatelic auctioneers, who regularly research this type of material themselves.

This new research site provides what her husband really wanted, Mary Wagshal said: for collectors to have access to this great range of classic philatelic research material.

The United States Philatelic Classics Society is a not-for-profit association of people interested in the pre-1894 stamps and postal history of the United States. Additional information is available from the society’s website.