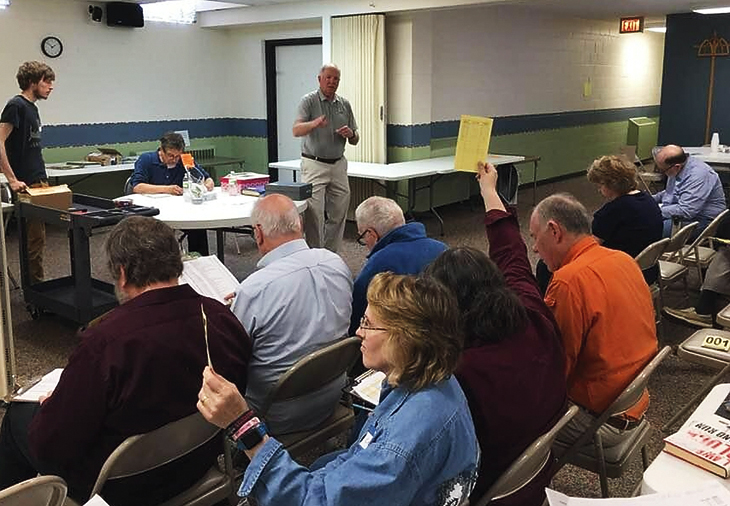 Bidders participating in the Stamp Out Cancer auction held April 28. The Quad City Stamp Club donates all proceeds from the annual event to the American Cancer Society. Photo by Leen Intveld.

The Quad City Stamp Club hosted its 41st annual Stamp Out Cancer auction on April 28. Held in Moline, Ill., the event raised $6,513, increasing the cumulative total from all auctions to more than $286,000.

All proceeds are given to American Cancer Society chapters in Iowa and Illinois. The organizers describe the philatelic auction as the only one of its type in the United States.

Two auctions are held at the same time. The United States auction brought in $4,045, while the total proceeds from the foreign stamps auction was $2,468.

The most paid for a single lot was $150 for a group of San Marino stamps.

Nearly 50 people attended the auction in person, joined by 23 others who participated by mail and on the internet.

All but one of those who bid by mail or online were successful in obtaining something, often at a very attractive price.

Davenport, Iowa, television station KWQC filmed part of the activity, and the Rock Island/Moline, Ill., Dispatch published a detailed article prior to the auction.

The 42nd annual Stamp Out Cancer Auction will take place May 4, 2019, also at Faith Lutheran Church in Moline.

Look for additional information about the Quad City Stamp Club and its annual benefit auction on their website.