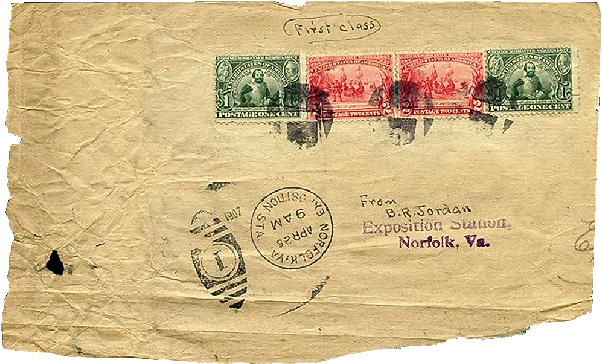 Figure 7. Slightly wrinkled and dirty but the only known first-day piece with both of the new 1907 Jamestown Expo stamps, this parcel front sold for $18,975. 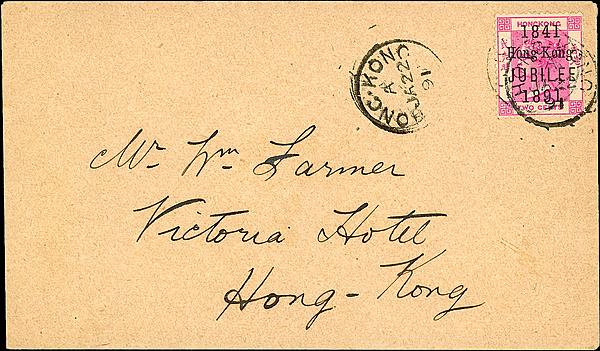 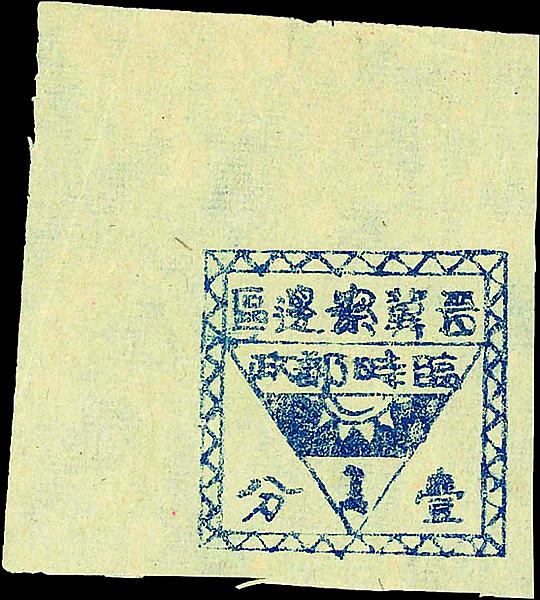 Figure 5. Once part of the Franklin D. Roosevelt collection, this 1937 emergency issue of North China was still mounted on a page with handwritten notes by the president when it was sold at auction in Hong Kong in January. 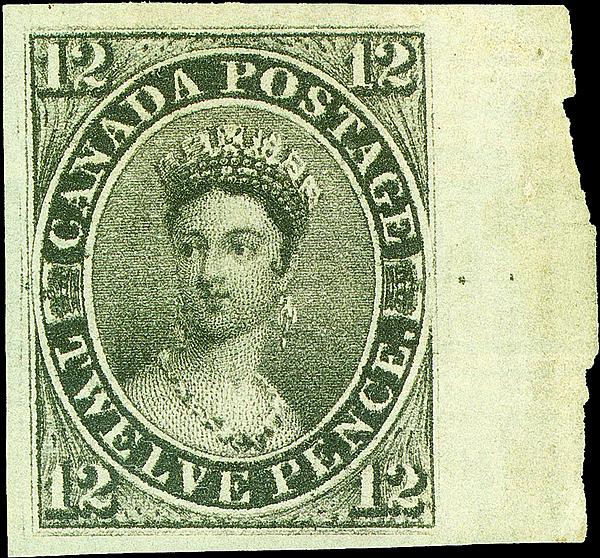 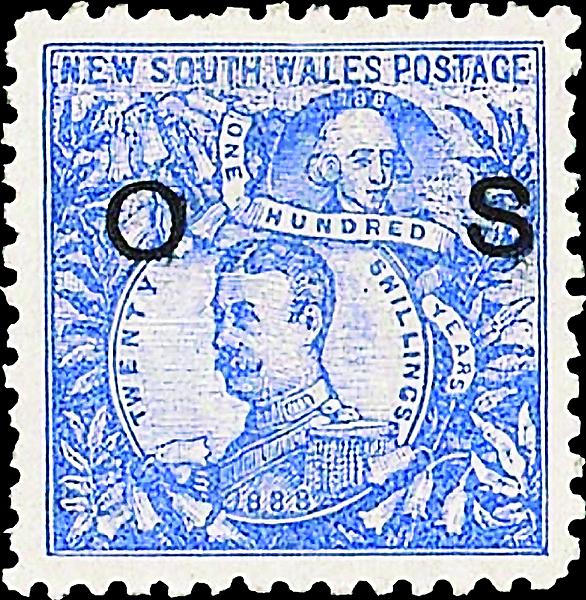 Figure 3. This New South Wales Official stamp sold recently for $14,900. It is believed to be one of two known, and the only example in private hands. 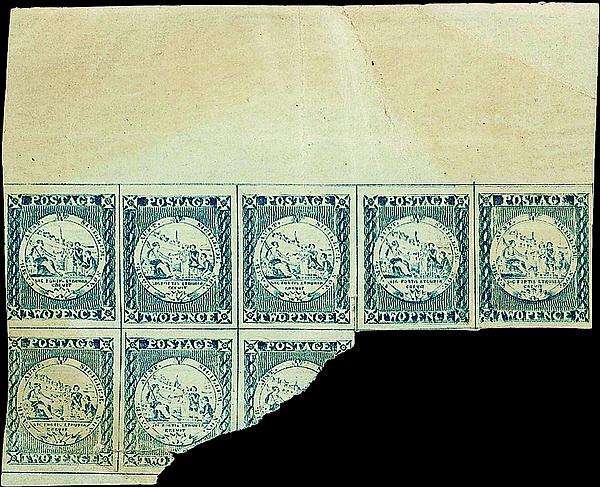 Some exciting sales of British Empire stamps led off the new year. In London, Spink offered on Jan. 23 the first part of the award-winning Medina collection of India’s earliest stamps, including the Scinde Dawk, Asia’s first postage stamp.

The British conquered the Scinde district, now Sindh province in Pakistan, in 1843, and found that the old postal system of dak (or dawk) runners was inefficient and costly. Within a decade, the British introduced a flat-rate, prepaid mail service modeled on Sir Rowland Hill’s reforms.

The first ½-anna stamps of 1852 (Scott A3), with the logo of the East India Company embossed on wafers of red wax, proved too fragile and were soon replaced by blind-embossed white paper stamps (A1). These, however, were too hard to read, so they were replaced by a blue-and-white version (A2).

All three types are elusive, with the red being the scarcest.

An example of the red stamp (Scott A3, Figure 1), described as superb, free of the usual cracks and apparently tied by a dotted-grid cancel to a “native” envelope, sold for about $35,300 (all Spink results here include 20 percent buyer’s premium).

One of its certificates states that the stamp did not originate on the cover, another states that it did. The item’s provenance includes the famous Burrus collection.

In 1854, lithographed adhesives with a bust of Queen Victoria, in values from ½a to 4a, were printed in Calcutta for use throughout India. The 4a blue and red (Scott 6), one of the world’s earliest bicolor stamps, can also be found with the head erroneously inverted in relation to the octagonal frame (6c).

Only a couple dozen of the inverts are known, making them classic philatelic rarities.

While collectors prefer this stamp cut square, with a hefty discount for examples cut to shape, only three of the inverts have survived in full form. The example in the Medina sale, though cut to shape, is otherwise free of faults and considered one of the finest on the market, having once graced the legendary Ferrary collection. As reported in the Feb. 18 Linn’s, it sold for $110,000.

The 4a stamp went through several printings, and specialists distinguish among numerous dies for the head and frame. A cover sent to Shanghai, bearing two cut-square 4a stamps (Scott 6) from the scarce third printing with head die III and frame die I, brought $27,900.

Other parts of the Medina collection will be offered in four other Spink sales this year.

On Feb. 19, Spink offered the Hutson collection of New South Wales. Billed as “probably the last of the old time research study collections to come on the market,” it was formed by Guybon John Hutson (1891-1963), a banker turned machine gunner who lost most of his eyesight when he was shot in the head in France during World War I.

Hutson nevertheless became an advanced philatelist, focusing on stamps of New South Wales “which appealed to him because of their infinite variation and uninvestigated problems, many of which he solved,” according to the sale catalog.

The collection was continued after his death by his son Thomas, who died last year.

Headlining the collection was the 1850-51 issue known as the 2-pence Sydney View, one of the earliest issues of this Australian province, showing the seal of the colony with allegorical figures before a skyline of the nascent town.

Several printing plates, variously retouched, in different stages of impressions and many shades of blue-grey resulted in a giddying assortment of varieties, of which the elder Hutson was a pioneer navigator.

An irregular unused block of eight of the 2d Plate I, intermediate impressions in deep blue (Scott 3e, Figure 2), the largest recorded Sydney View multiple, sold for $39,000. The block, with largely original gum, consists of a top-margin strip of five and all or some of three additional stamps from the row below.

An unused 20-shilling Capt. Phillip and Lord Carrington stamp with “O S” overprint for official use, watermarked “20/-NSW” in circle (Scott O33, Figure 3), went for $14,900. Hutson knew of only one other unused example of this stamp besides his own: the one residing in the Royal Collection.

In Halifax, Eastern Auctions held a sale Feb. 22-23 featuring Canadian and worldwide stamps. The standout was a superlative unused example of one of the world’s classic rarities, the 12-penny black Queen Victoria stamp of 1851 (Scott 3, Figure 4).

A little-needed stamp at the time it was issued, fewer than 1,500 were sold over a six-year period before the remainders were destroyed.

The provenance of this right-hand sheet margin example, which has a particularly deep, rich shade of color, full original gum and a light hinge mark, is impressive. Its first owner was a son-in-law of the woman pictured: John Campbell, Duke of Argyll and Marquess of Lorne, who served as governor-general of Canada for a time.

The stamp later spent several decades in the collection of the great philatelist Alfred Lichtenstein.

The Canadian collector who owned it for the past 33 years, and remains active, “was very pleased” with the realization of about $218,600 (including 15 percent commission), according to Yohann Tanguay of Eastern Auctions.

Tanguay said he believes the amount is a record for a stamp sold in Canada. The buyer was another Canadian collector who lives on the west coast.

January’s already impressive run of results for stamps of China continued with a Dynasty Auctions sale on Jan. 27-28 in Hong Kong. Highlights of the Dynasty sale (the firm is part of Connecticut-based Daniel F. Kelleher Auctions) were mostly stamps of the 19th-century Imperial era.

These included some of the stopgap issues of 1897, when the new Chinese Imperial Post was getting organized.

The last issue of the old Customs Post had come out in 1894, a lithographed set denominated in candareens for the 60th birthday of Dowager Empress Cixi (Tse Hsi). These stamps, along with reprints made in haste when old stocks ran out, were given provisional overprints in the new cents currency using a variety of typographic figures and settings, creating several different sets.

An unused, original-gum $5 “Red Revenue” overprint from later in 1897 (Scott 85) brought $103,500. The auction house noted that most examples of this stamp “were removed from remittance certificates” and lack gum.

An emergency 1937 issue of North China was offered for the first time since being auctioned in 1946 as part of Franklin D. Roosevelt’s collection.

An unused, no-gum corner margin example of the 1¢ blue White Half Sun Issue (Yang NC1, Figure 5) was still mounted on a page with a note in FDR’s handwriting: “Some of the new stamps now being used in the regional area of Shansi, Charhar and Hopei.” It brought $81,500.

A Harmer-Schau sale on Jan. 11-13 in Anaheim, Calif., included a rare first-day cover for the 1907 Jamestown Exposition issue.

A century ago, first-day collecting had yet to catch on, and only a couple of items exist with the “April 26 Norfolk, Va. Exposition Station” cancellations marking the debut of the 1¢ and 2¢ commemoratives (Scott 328-29; the 5¢ value didn’t come out until the following month).

Shown in Figure 7, the somewhat messy parcel front (both of the 1¢ stamps have faults) is the only FDC piece known bearing both of the newly issued values. It sold for $18,975, including 15 percent buyer’s premium.