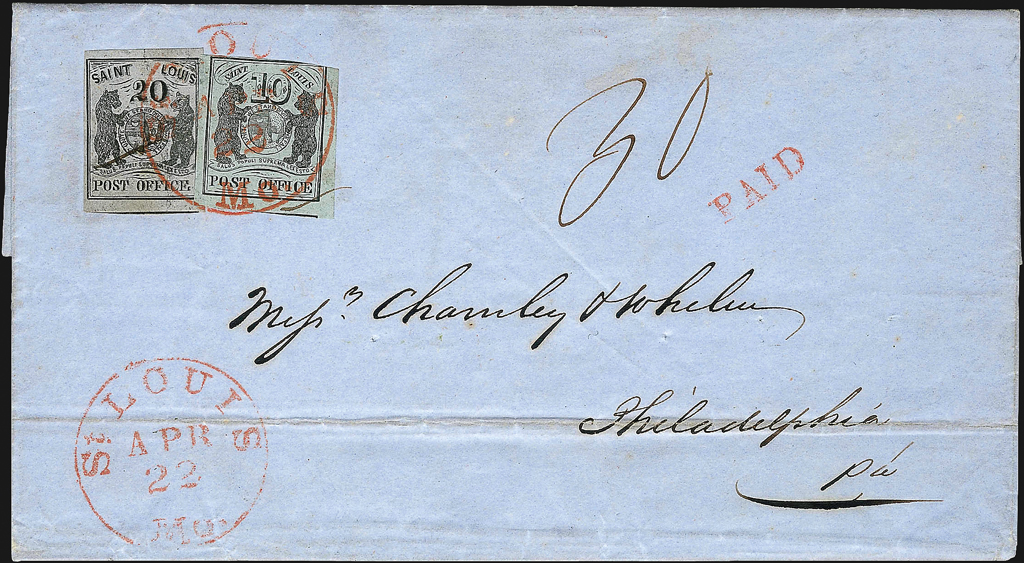 One of only two known covers with St. Louis Bears postmasters’ provisionals on two different paper types, this 1846 letter sold for $126,500 at Siegel’s sale of the Kramer collection. 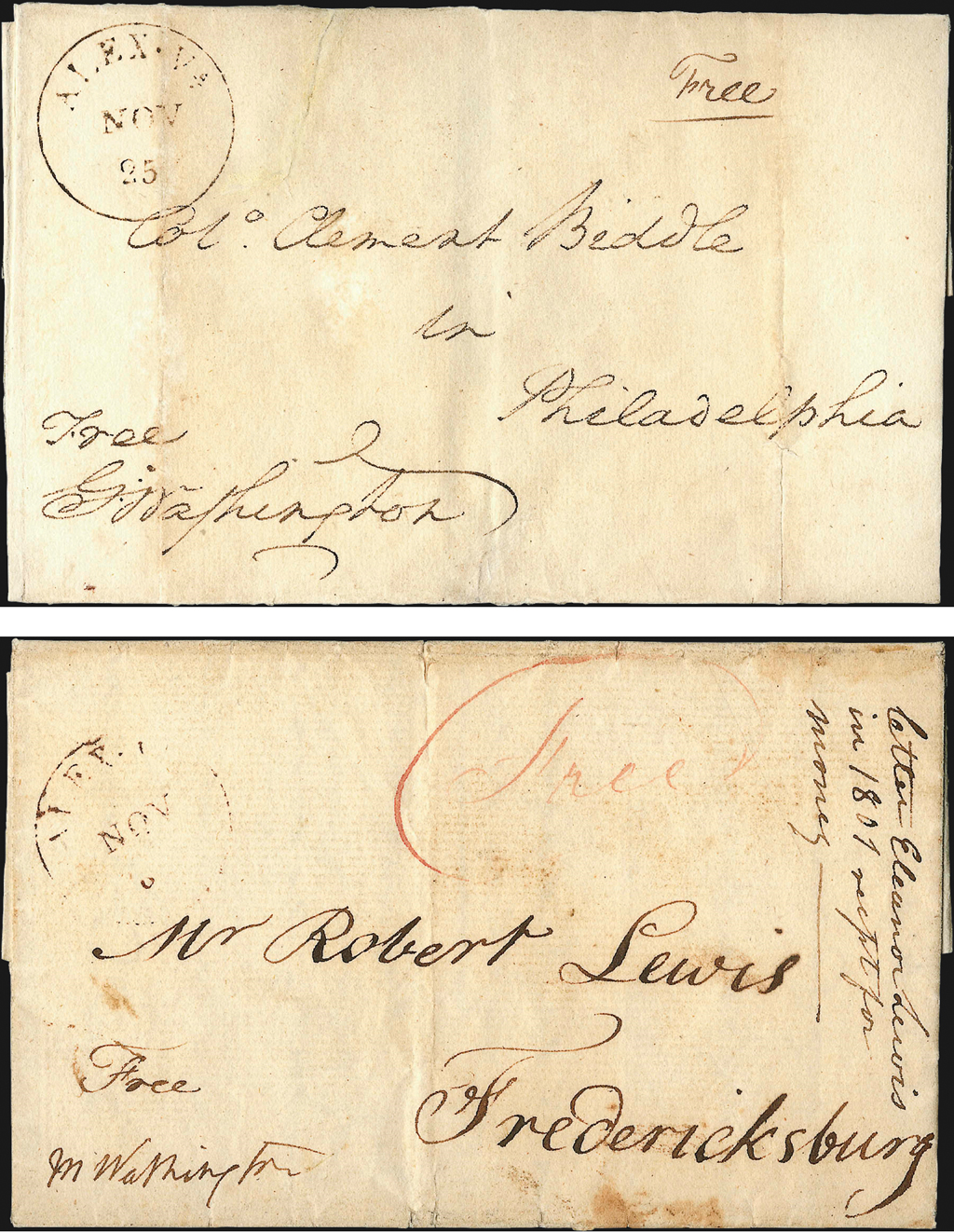 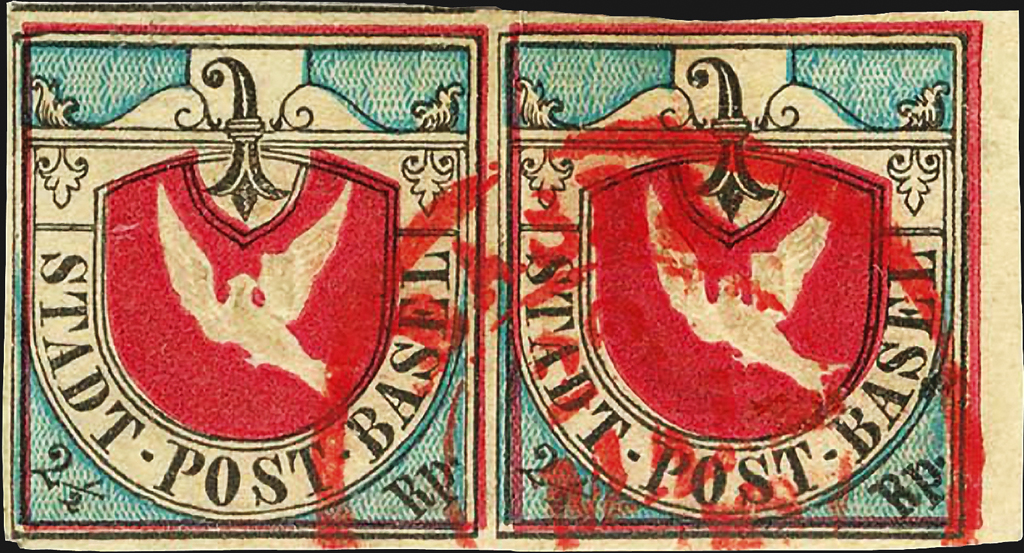 A used pair of the Basel Dove stamps brought $114,000 at the Rapp Auction in November. 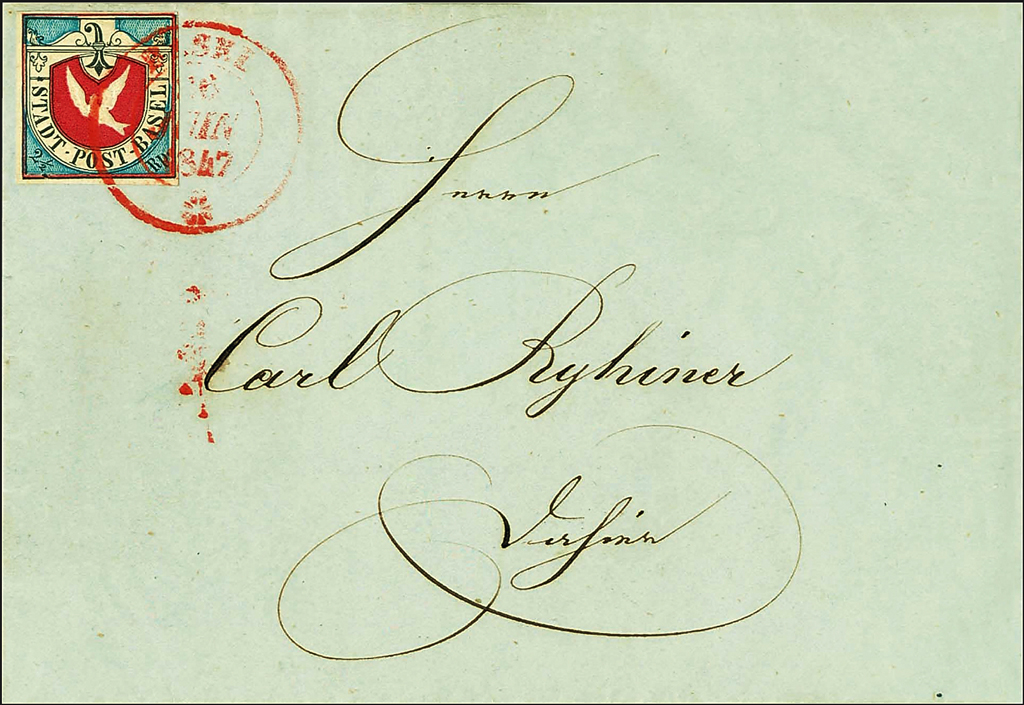 This beautiful Basel Dove cover set a new world record price for that issue on cover: $108,000 at the Rapp Auction in Switzerland last November.

The Feldman's rarities auction also included this cover franked with three examples of the Ceres 20-centime black (Scott 3) was described as the only known cover bearing stamps of France’s first issue to have been sent to South Africa. 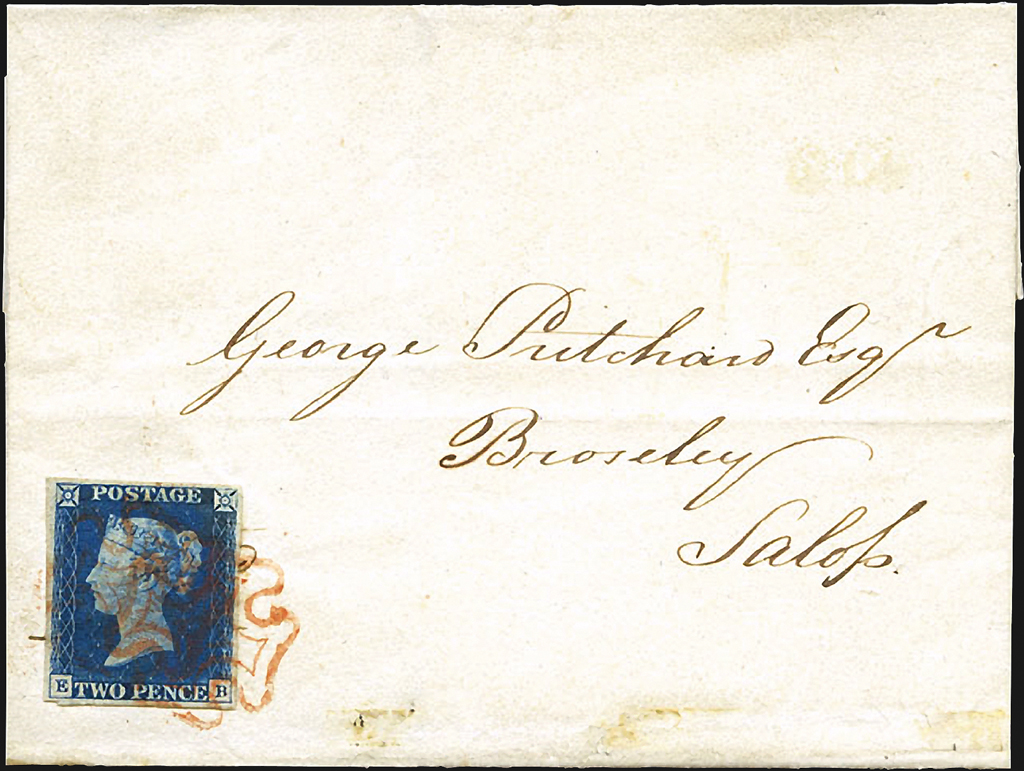 A small folded letter with Great Britain’s Two-Penny Blue stamp postmarked May 8, 1840, sold for about $62,000 at Feldman’s world rarities sale. 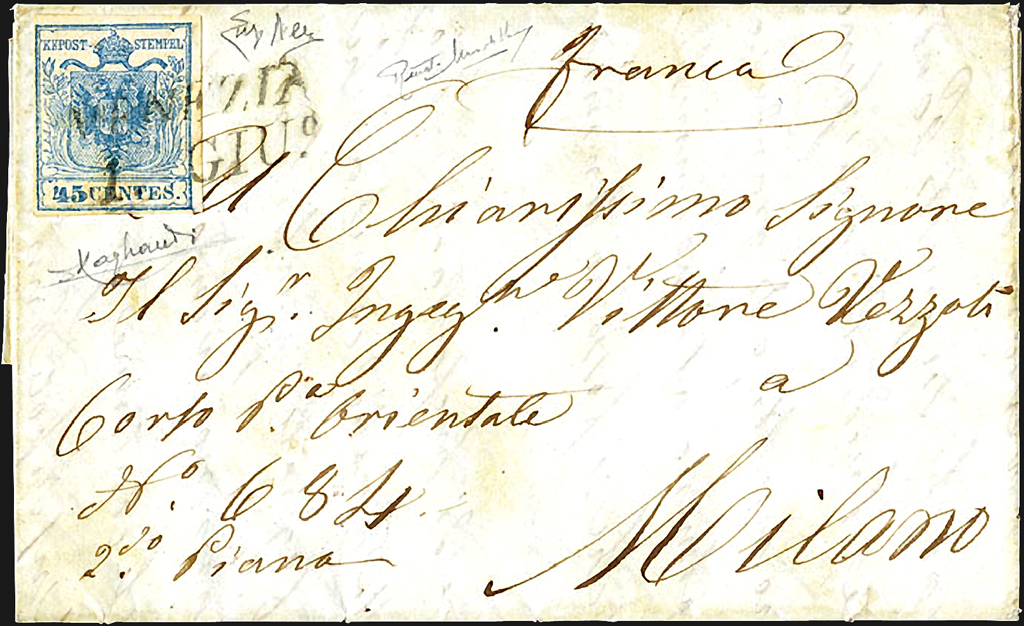 This Italian States June 1, 1850, cover from Venice to Milan is a first-day cover for the Lombardy-Venetia 45-centesimi stamp (Scott 6). It was sold in Feldman's December auction. 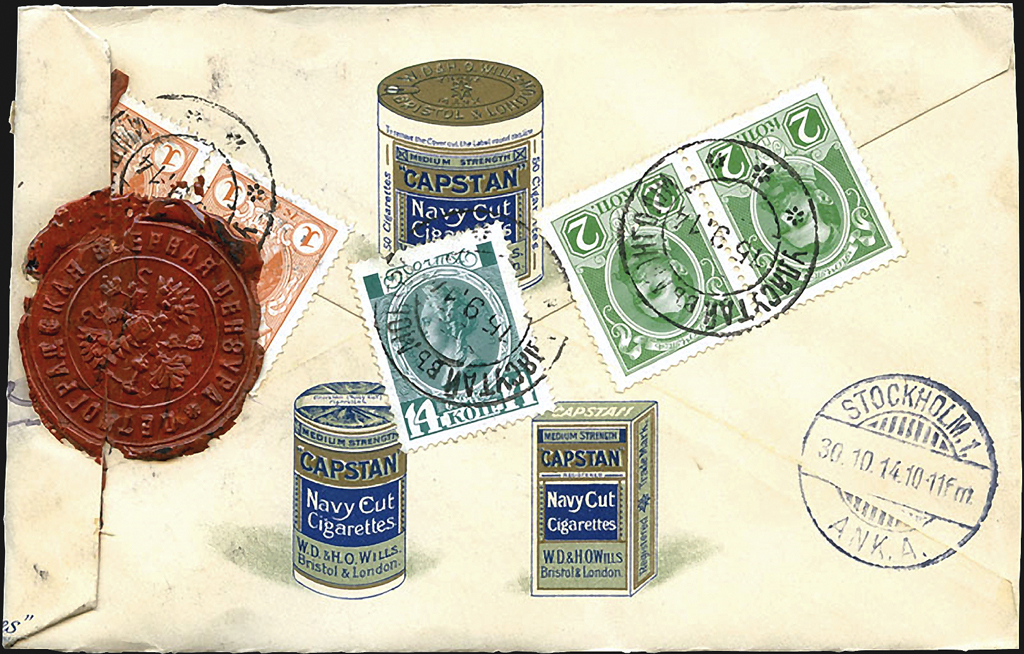 The “most stunning and rarest” Mongolia cover, with a scarce postmark of Ulyasutai, brought $103,000 at Feldman’s December auction. The stamps are affixed to the back of the cover, which is pictured here.

Long known as the Filstrup cover, this unique example of the United States 1860 90¢ issue on a domestic letter went for $37,375 at the Kramer collection sale. Five covers to foreign destinations are known. 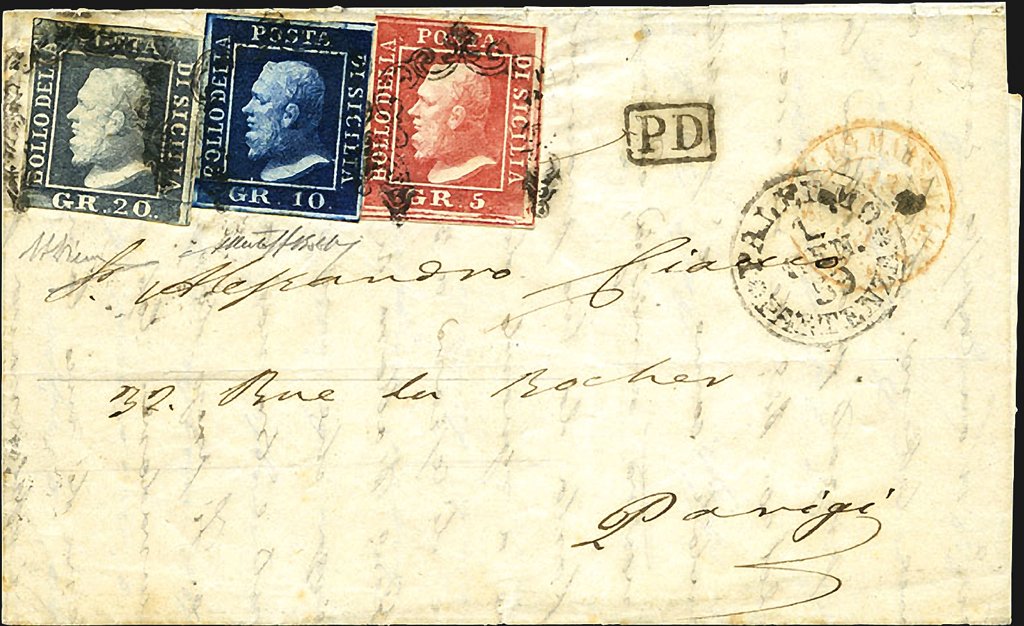 An 1859 folded letter from Palermo to Paris carries three stamps on their day of issue. It brought about $103,000 last December at Feldman’s auction in Geneva, Switzerland.

The firm of David Feldman held its autumn auction series in Geneva Dec. 1-6, 2014. The six-day event was Feldman’s 18th Rarities of the World showcase, with notable collections of Russia, Israel, Zanzibar and the British Empire.

The sale was previewed on the front page of Linn’s Dec. 1 issue.

A long string of well-known stamps made the “rarities” section of the sale seem like a who’s who of classic philately, including a large number of first-day covers and earliest known usages of classic 19th-century stamps.

An 1859 folded letter from the Sicilian city of Palermo to Paris, franked with a colorful trio of 5-grana deep rose, 10g dark blue and 20g violet stamps of King Ferdinand II (Scott 14, 16-17) was postmarked Jan. 1, 1859, the stamps’ first day. Ferdinand died on May 22, 1859, and his kingdom was incorporated into unified Italy a year later.

The stamps are canceled with the ornate “horseshoe” peculiar to Sicily, designed to spare the king’s vanity by obliterating only the frame of the stamp, not his face.

Described as “an important showpiece of the greatest rarity,” the cover was sold for E84,000 (including the 20 percent buyer’s premium that Feldman adds to all lots), the equivalent of a little more than $103,000 at early December exchange rates.

An unusual item described as “possibly the most stunning and rarest of all Mongolia covers” was hammered down a few minutes after the Sicily cover at the same price as the latter.

Reportedly a new discovery of the scarce postmark from the Russian outpost at Ulyasutai, Mongolia, the 1914 advertising cover for Capstan Navy Cut cigarettes is franked on the back with pairs of the 1-kopeck and 2k and a single of the 14k stamps (Scott 88-89, 94) from Russia’s 1913 issue, commemorating the tercentenary of the founding of the Romanov dynasty. A circular datestamp cancels each of the three stamps.

The cover, addressed to Sweden, apparently was opened in St. Petersburg and reclosed with a fancy red wax imperial seal. The front of the cover, which also bears an advertising image, has a registration label and another circular datestamp of Ulyasutai.

Here is a brief video describing the cover:

Another Italian States FDC in the Feldman sale was a June 1, 1850, cover from Venice to Milan bearing a Lombardy-Venetia 45-centesimi stamp (Scott 6).

Venice and Milan were the two principal cities of this northern Italian kingdom, amalgamated into one entity by the Austrian Empire after the Napoleonic wars, which joined the rest of Italy in 1859 (Lombardy) and 1866 (Venetia).

The country is listed in the Scott Classic Specialized Catalogue of Stamps and Covers 1840-1940 under Austria, although Italian catalogs naturally include it as part of Italy.

The cover, bearing numerous experts’ signatures in pencil near the stamp, sold for the equivalent of about $74,000. A 1977 certificate from Enzo Diena (1927-2000), a noted expert on Italian stamps, stated that he knew of only one other such cover.

While May 6, 1840, is generally accepted as the first day of use for the world’s first stamp, the Penny Black (Scott 1), its Two-Penny Blue companion for double-weight letters is traditionally regarded as having been put into use two days later (though a few earlier covers exist for both stamps).

The bright blue stamp in the Feldman auction has four good margins and is tied to the letter by a crisp red Maltese cross. The letter is addressed in an elegant hand to a small town in the county of Shropshire. It sold for about $62,000.

While FDCs of France’s first issue, the Ceres stamps of 1849, are quite desirable, they are not rare. A couple in the Feldman sale fetched four-figure prices.

However, exotic foreign destinations are a popular area in classic philately and can generate special interest in items with even relatively ordinary stamps. A cover franked with three examples of the Ceres 20-centime black (Scott 3) was described as the only known cover bearing stamps of France’s first issue to have been sent to South Africa.

At the time, that region’s importance was still in the future, with the discovery of diamonds in the 1860s and gold in the 1880s.

The cover’s numerous postal markings tell the full story of its improbable journey.

It was mailed on Aug. 4, 1849, from the town of Rochefort-sur-Mer, addressed to the Cape of Good Hope, a British colony in what is now the Republic of South Africa. The letter reached Bordeaux the following day, but was sent back to Rochefort for additional postage.

Reposted a few days later, it finally left Bordeaux in mid-September aboard a merchant ship. For some reason, however, the cover wound up going to the island of Mauritius instead, where it was stamped with the British colony’s crowned-circle datestamp.

Obviously unable to locate the recipient, the post office sent the letter to London, where it received a boxed “Gravesend India Letter” cachet on the back. The British re-expedited the letter to its addressee in the “Cap de Bonne Esperance” on April 15, 1850.

Having finally reached its proper destination after a journey of at least 23,000 miles, and eventually in the hands of a Swiss auction firm, the cover was sold for about $59,000.

A new world record price for a Basel Dove on cover was among the notable results at Rapp Auctions in Wil, Switzerland, on Nov. 26.

“A number of new buyers and investors with well-lined pockets were present in person in the hall,” according to the foreword to the results at www.rapp-auktionen.com.

The brochure also quoted one attendee: “‘What am I doing here?’ mumbled a German stamp dealer of long standing as he walked past,” evidently disappointed at being outbid.

Switzerland was one of the world’s first countries to issue postage stamps, with the individual cantons of Zurich and Geneva putting out their first issues in 1843.

Basel followed in 1845; its lone stamp (Scott 3L1) was printed in three colors with an embossed motif of a white dove carrying a letter. More than 40,000 were printed during the nearly 10 years the stamp remained current, and it remains one of the world’s most popular classic issues.

The Basel Dove cover in the Rapp sale might be the most beautiful in existence. It is addressed in flowing calligraphy to Carl Ryhiner, a Basel merchant and silk-ribbon manufacturer whose name appears on many surviving Basel Dove covers.

The stamp is from the first printing, “vividly blue, very bright and fresh” in the auction description, with strong embossing and tied by a light red datestamp of June 26, 1847.

The collection offered in this Siegel sale documented the development of postal service in America from independence to the aftermath of the Civil War. Described as a “tour de force in American postal history,” it received philately’s highest honor, the grand prix d’honneur, at the Brasiliana 2013 show.

The nucleus of that eight-frame exhibit, a July 4, 1776, letter addressed to John Hancock, has been donated by Kramer to the National Postal Museum.

Having done all he could with the collection, the catalog explained, Kramer chose to sell the best remaining items and move on.

“As he plans his next exhibit, they are no longer germane and are being returned to the market,” auctioneer Scott Trepel wrote.

The front cover of the auction catalog showed a pair of stampless covers, each endorsed by the signatures of George and Martha Washington, respectively, indicating that the letters were entitled to free postage.

George Washington free franks, while highly sought-after, are not rare. Martha’s are: She was granted free-frank privilege only in 1800, after her husband’s death, and used it for just two years, until her death in 1802. Only four of her franks are known to survive.

The cover with George’s frank, used after he left office, sold for $12,650, including the 15 percent buyer’s premium Siegel adds to all lots. The cover franked “Free M. Washington” sold for $37,375.

For a short period before the Post Office Department issued official government postage stamps in 1847, local postmasters produced their own adhesives for the prepayment of postage.

Among the most popular of these postmasters’ provisionals are the series known as the St. Louis Bears, three stamps in denominations of 5¢, 10¢ and 20¢ that get their nickname from the Missouri coat of arms shown in the design, which is supported by a pair of standing bears.

The stamps were printed in black between 1845 and 1847, first on greenish paper, then on gray lilac paper and finally on pelure paper.

The cover in the Siegel sale bears a combination of St. Louis 20¢ black on gray lilac (Scott 11X6) and 10¢ black on greenish (11X2). The stamps are canceled with a line in pen and tied to the folded letter by a bold red “St. Louis, Mo. Apr. 22” circular datestamp. The letter was sent to Philadelphia in 1846, at the prevailing 30¢ rate.

Said to be one of just two surviving covers to combine St. Louis Bear stamps printed on two different papers, it sold for $126,500.

Another highlight of the Kramer collection sale was an 1861 cover with a solo use of the 90¢ Washington stamp of 1860 (Scott 39), sent from Cincinnati to Peoria, Ill.

Docketing on the envelope, known as the “Filstrup cover” in honor of one of its previous owners, shows it held court papers. Its contents would have weighed 15 ounces, requiring franking of 30 times the basic 3¢-per-half-ounce rate.

The 90¢ stamp of 1860 was issued primarily for use on foreign mail (five other covers to foreign destinations are known) and this is its only known use on a domestic letter. The issue was demonetized and withdrawn later in 1861 upon the outbreak of the Civil War. Siegel hammered the Filstrup cover down for $37,375.