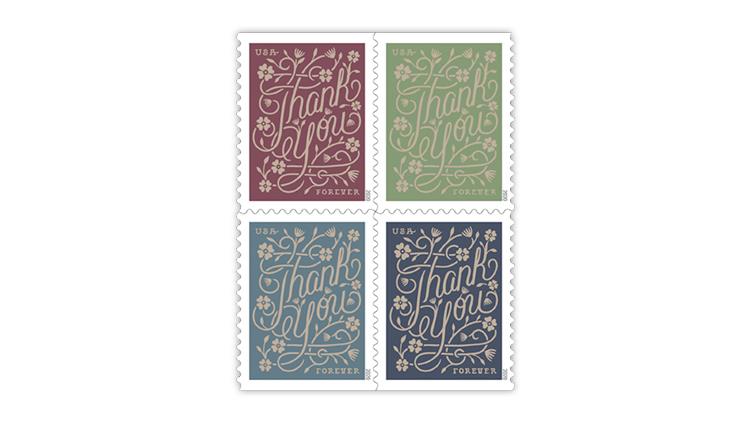 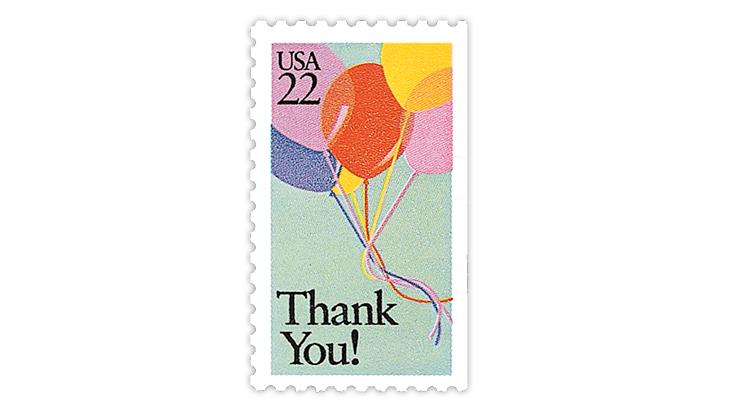 Colorful balloons decorate a 22¢ Thank You stamp from a set of eight Special Occasions stamps issued in a booklet of 10 in 1987. 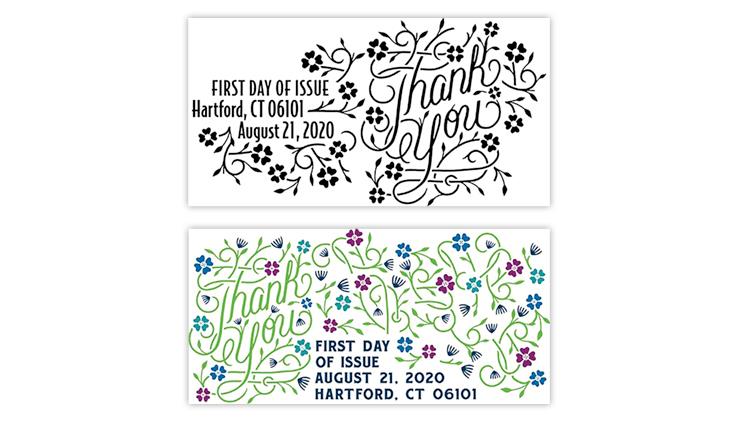 Pictorial first-day cancels for the Thank You forever stamps include calligraphic and floral elements similar to the stamp designs.
Previous
Next

Four new forever stamps from the United States Postal Service will help mailers add a touch of gratitude to any card or letter.

The four stamps share the same design of the phrase “Thank You” spelled out in cursive script and printed in gold foil with gold floral ornamentation. Each stamp has one of four solid-color backgrounds in maroon, pale green, blue gray or purple, with each color repeated five times in the pane of 20.

“Highlighted in gold foil are the words ‘Thank you’ in cursive script and an elegant floral design that swirls through and around the words,” the Postal Service explained in its announcement of the new set.

“Dana Tanamachi, the stamp designer and lettering artist, drew the original sketches for the calligraphy by hand and then created the final art digitally. She added floral elements to the swirls, which resemble vines.”

Greg Breeding served as art director for this issue.

A larger than usual press run of 200 million stamps has been ordered from contract printer Banknote Corporation of America. The stamps are printed by flexography with gold foil stamping on the Gallus RCS press.

Post offices will only sell the stamps in complete panes of 20, not individually, according to a directive published in the July 30 issue of the USPS Postal Bulletin.

Because of the COVID-19 pandemic, no in-person first-day ceremony is planned, but the Virtual Stamp Show taking place online will host a first-day-of-issue celebration sponsored by the American Topical Association.

The designation of Hartford, Conn., as the official first-day city reflects initial plans to issue the stamps there during the Great American Stamp Show. However the 2020 show planned for August was canceled May 22 because of the pandemic.

These are not the first U.S. stamps to feature a thank you message. A set of eight 22¢ Special Occasions stamps issued in a 1987 booklet of 10 included one stamp with colorful balloons and a “Thank You” inscription (Scott 2269).

Other upbeat greetings highlighted on U.S. stamps in recent years include “Celebrate,” which appeared on a 41¢ stamp in 2007 (Scott 4196) and has returned periodically in various forms with different denominations.

The calligraphic design of the new Thank You stamps also appears on two pictorial first-day cancels prepared for the issue. Although the black and color postmarks differ in their arrangements, both combine the cursive greeting text with floral elements.

A press sheet for the Thank You stamps consisting of eight unsevered panes of 20 stamps will be offered for $88 on the day of issue. Press sheets of U.S. stamps offered this year have often sold out almost immediately after the stamps go on sale.