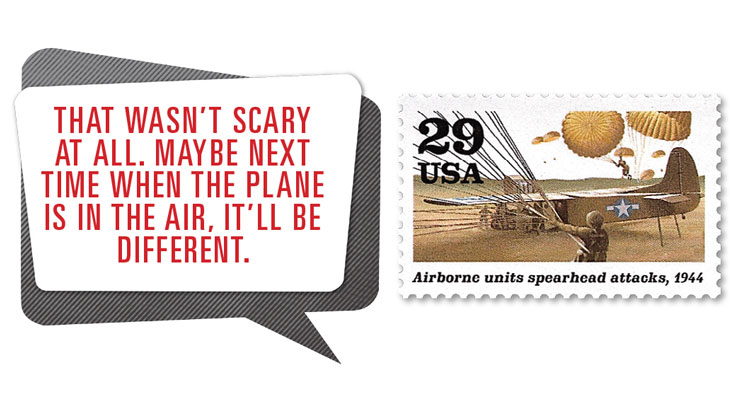 The winner of the philatelic part of the August cartoon caption contest is Dave Schwartz of Commack, N.Y., who suggests that the scene on the 29¢ World War II 1944: Road to Victory commemorative stamp inscribed “Airborne units spearhead attacks” might be

Several entries connected the experience to a different line of work. Mary Lou Moseley, of Owensboro, Ky., came up with “I should have taken that other government job I was offered with the Post Office Department. They pay a little more and unfriendly dogs don’t carry guns!”

“Hey, Joe, save one for the USPS. They seem to be in free fall!” was sent by Dave Schwartz of Commack, N.Y.

Another submission by Schwartz was the nonphilatelic line winner for the contest.

In the philatelic category of the contest, Fred Zinkann of Montgomery, Ill., takes the prize with “I’ll never bail out on my Air Mail collection.”

“Chute! I missed the mark! My plane was late and I missed buying the 1¢ magenta by 20 minutes!” from David Vikan of Dickinson, N.D.

“You think we can get a first flight cover for this?” from Jim Smith of Etowah, N.C.

“Anyone see Wrong-Way Wilson?” by Rich Wolf of Westminster, Md.

“Wish someone had told me I’d get her quicker by staying in the glider,” from Larry Reynolds of Rio Rancho, N.M.

“This is the last time I buy a parachute on a trial basis with no strings attached!” from Steve Kotler of San Francisco, Calif.

Thanks and a tip of the hat to all who entered. The next contest will be announced in the Oct. 11 issue of Linn’s.