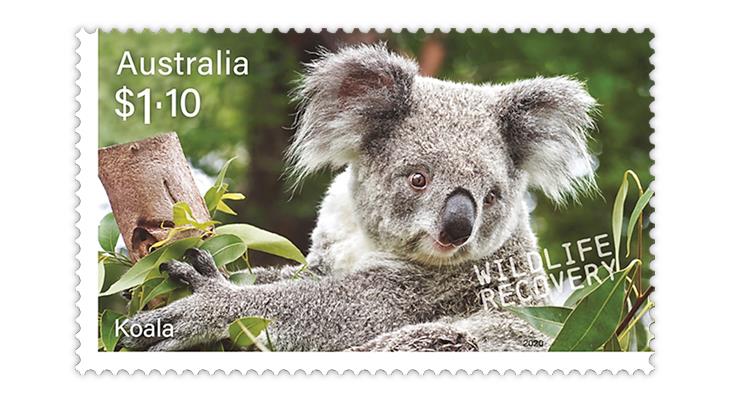 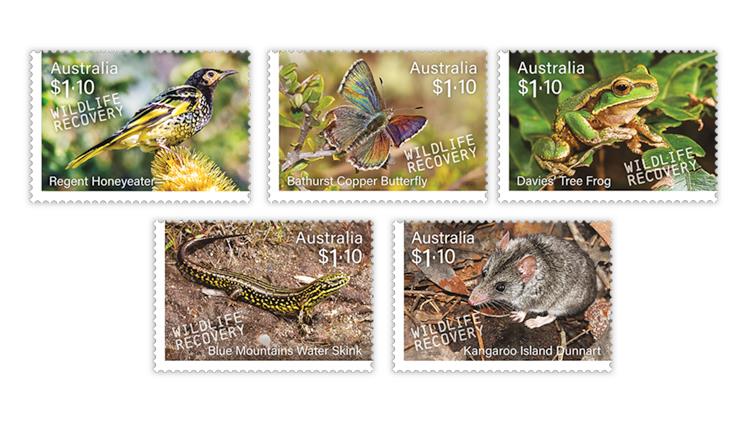 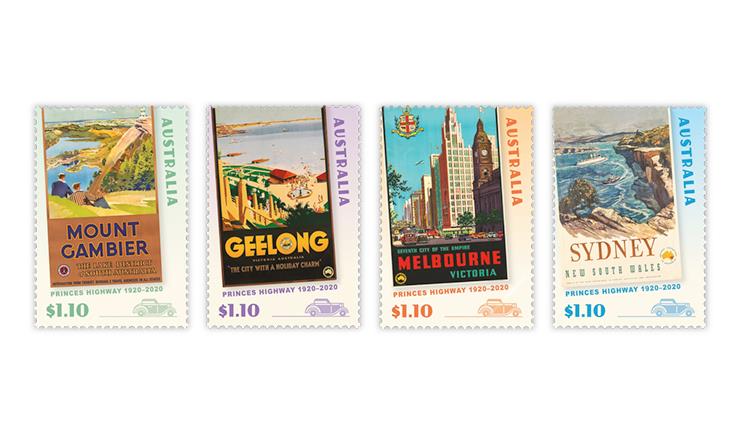 Vintage travel posters of the 1930s and 1940s are displayed on Australia’s new stamps commemorating the 100th anniversary of the opening of the Princes Highway. 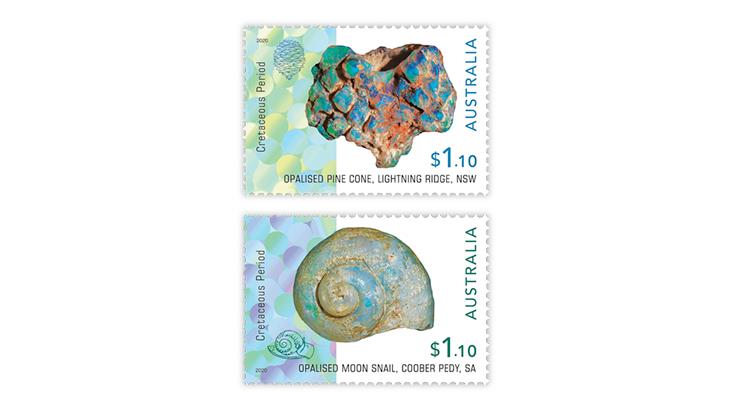 Opal-filled fossils of a pine cone and a moon snail are pictured on two of the four stamps in Australia’s Aug. 17 Opalized Fossils set.
Previous
Next

Australia highlights wildlife, a highway and fossils on stamps issued in August.

The first issue of the month, on Aug. 4, was a set of six for Stamp Collecting Month.

In announcing the stamps, Australia Post said: “Every August, Australia Post runs Stamp Collecting Month (SCM) to promote the hobby of stamp collecting, while simultaneously engaging middle to upper primary school students with themes aligned to a curriculum area, such as history, geography, science and the environment.”

The theme for this year’s Stamp Collecting Month is wildlife recovery.

Each stamp is denominated $1.10, the domestic letter rate in Australia, and shows an animal that was “recently identified by the federal government’s Wildlife and Threatened Species Bushfire Recovery Expert Panel as in need of immediate conservation management,” according to Australia Post.

The koala (Phascolarctos cinereus), a tree-dwelling marsupial that lives in the eucalyptus forests of southeastern and eastern Australia, is featured on one stamp.

Much of the koala’s habitat was lost during the 2019-20 bushfires. Australia Post said: “Koalas were rescued and evacuated to triage centres and shelters, and as they have been rehabilitated they’ve been released back into suitable habitat with plentiful eucalypt trees.”

Jo Mure designed the stamps. EGO printed them by offset lithography in various formats, including sheets of 50, booklets of 10 and a souvenir sheet with all six of the stamps.

A set of four stamps issued Aug. 11 commemorates the 100th anniversary of the Princes Highway.

This coastal highway connecting Sydney and Melbourne is named in honor of the Prince of Wales (later King Edward VIII), who visited Australia in 1920.

The first section of the highway from Melbourne opened Aug. 10, 1920, in Warragul, Victoria. Another opening was held Oct. 19 in Bulli, New South Wales.

A 1920 Sydney Morning Herald report about the Bulli opening said: “Mr. Mutch [Thomas Davis Mutch, the minister of local government], in naming the road, said he had travelled over practically the whole of New South Wales by train, on foot, and by cycle, but he knew of no road more beautiful in the whole of his Australian travels than the Prince’s Highway.”

Vintage travel posters that capture some of this beauty are pictured on the four $1.10 stamps.

An article on an Australia Post website for collectors describes one of the posters as picturing “the cobalt-blue waters of the lakes that inhabit the dormant volcanic craters of Mount Gambier.”

Artist John Charles Goodchild (1898-1980) created this poster, circa 1930, for the Government Publicity and Tourist Bureau of South Australia.

The next stamp shows a poster commissioned by the Victorian Railways and Geelong Publicity Council. Inscribed “The City With A Holiday Charm,” it shows an illustration by Isaac James Northfield (1887-1973) of Eastern Beach in Geelong.

The other two stamps depict posters of the 1940s promoting travel to cities. Designed by Percy Trompf (1902–1964), the Melbourne poster was also commissioned by Victorian Railways.

Richard Ashton (1913-2001) created the poster showing Sydney Harbor while working as the art and publicity officer of the New South Wales Department of Tourism and Immigration.

Each stamp includes the inscription “Princes Highway 1920-2020” underneath the poster and an image of a vintage automobile in the lower right corner. Designed by Mure, they were printed by EGO in sheets of 50.

The Australian Opal Centre in Lightning Ridge, New South Wales, houses a collection of opalized fossils and calls them “precious relics from the age of dinosaurs.”

On its website, that museum also explains how such fossils are created: “Opal forms in cavities within rocks. If the cavity is there because part of a living thing — for example a bone, shell or pinecone — was buried in the sand or clay before it turned to stone, then the opal can form a fossil replica of the object that was buried.

“A fossil is simply ‘the remains or traces of an ancient animal or plant preserved in rock.’ Opalised fossils form in ways similar to other fossils, except that here they are preserved in silica. Elsewhere, fossils are preserved in minerals such as agate, pyrite or limestone.”

Three of the new stamps show opalized fossils from the museum’s collection: a pine cone, the tooth of the theropod dinosaur and wood.

The fourth stamp features a moon snail fossil found in Coober Pedy, South Australia. This fossil is in the collection of the South Australian Museum.

All four of the fossils date from the Cretaceous period (145.5 to 66 million years ago), and “Cretaceous Period” is inscribed on the left side of each design.

Each design also includes a drawing of the item before it was fossilized. For example, the two stamps shown nearby depict a pine cone in the upper left corner and a moon snail in the lower left corner, respectively.

Simone Sakinofsky of Australia Post designed this issue. RA printed the stamps in sheets of 50, in booklets of 10 and in a souvenir sheet. The four designs are se-tenant (side-by-side) in the booklet and the souvenir sheet.