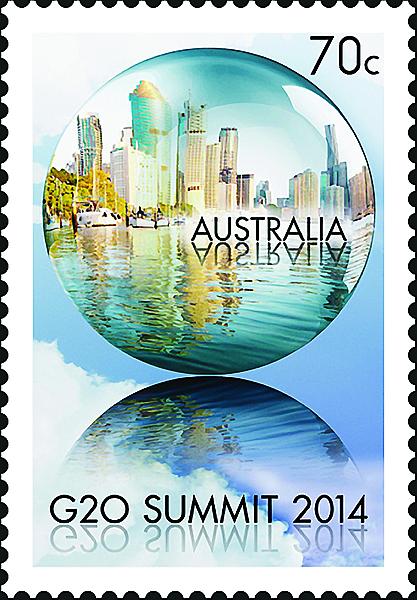 Australia Post issued a stamp June 3 to honor the upcoming G20 Leaders Summit in Brisbane, Australia. A contest was held to select the design.

The G20 Leaders Summit to take place Nov. 15-16 at the Brisbane Convention and Exhibition Centre will host as many as 4,000 delegates and 3,000 media representatives from around the world.

Australia’s secondary schools participated in the contest to design the G20 Leaders Summit stamp. The new-issue announcement from Australia Post says: “The competition was a wonderful opportunity for students to showcase their creative talent, and produce a design that best represents the G20 and Australia’s role as host.”

The winning design came from MacKillop College in Werribee, Victoria. This design features the Brisbane skyline with the buildings reflected in the Brisbane River, with the text “Australia” and “G20 Summit 2014” also mirrored.

The stamp is denominated 70¢ to pay the domestic rate.

“The hosting of the G20 Leaders Summit is the pinnacle event of Australia’s G20 Presidency. The summit gives Australia an opportunity to strengthen engagement with the world’s major economies. It will also showcase Brisbane, and Australia, as world-class destinations for tourism, education and business.”