Australian Kangaroo and Map series stamps to be auctioned Oct. 7 by Siegel International 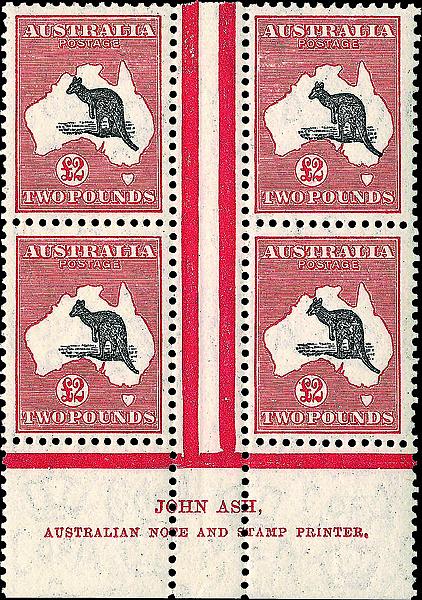 A bottom-margin John Ash imprint block of four of the 1934 £2 Kangaroo and Map stamp, with the bottom right stamp displaying the opened-mouthed kangaroo variety. One of only six recorded imprint blocks of this issue, it will be offered at the Oct. 7 Siegel auction. 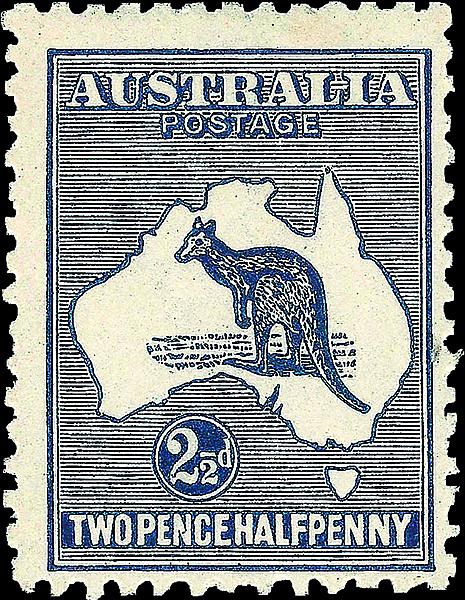 One of three known mint examples of Australia’s 1915 2½-penny dark blue Kangaroo and Map stamp with the “1” of the fraction omitted. The stamp is among those that will be auctioned Oct. 7 by Siegel International in New York City.

Australia’s 1913 Kangaroo and Map stamps were the first issued for the new country after the six British colonies on the Australian continent agreed to form an independent nation.

Varieties of these stamps were issued well into the 1930s, with a bounty of different colors, perforations and watermarks.

Robert A. Siegel International, in association with Charles F. Shreve, will offer the Goldfarm collection of Australia’s Kangaroo and Map series stamps at public auction Oct. 7.

The 4 p.m. sale will take place at the fourth-floor Siegel auction galleries at 60 E. 56th St. in New York City.

A particularly striking error from this issue is the missing “1” from the fraction in the 1915 2½-penny dark blue Kangaroo and Map stamp with the watermark narrow crown and narrow A (Scott 46a).

Just three mint examples of this variety are known. The single stamp offered in this auction is described as “very fine for this famous error” with the barest trace of hinging, “brilliantly fresh, with deep luxuriant color and impression on bright paper, attractively centered, tiny natural wood pulp inclusion at right.”

It is listed in the auction catalog with a value of $62,500 in Australian dollars (equivalent to roughly $56,830 in United States dollars in mid-September).

Another attractive rarity is the 1934 £2 gray and rose crimson stamp in a bottom margin John Ash imprint block of four with C of A watermark (Scott 129), with the bottom right stamp displaying the so-called opened-mouthed kangaroo variety. Only six imprint blocks of four of this issue are reported known. The top pair on this example are lightly hinged, with the bottom two stamps never hinged.

The sale includes a wide range of stamps within the various watermark varieties, as well as essays, specimens, some examples of postal stationery and postal history, and balance lots.