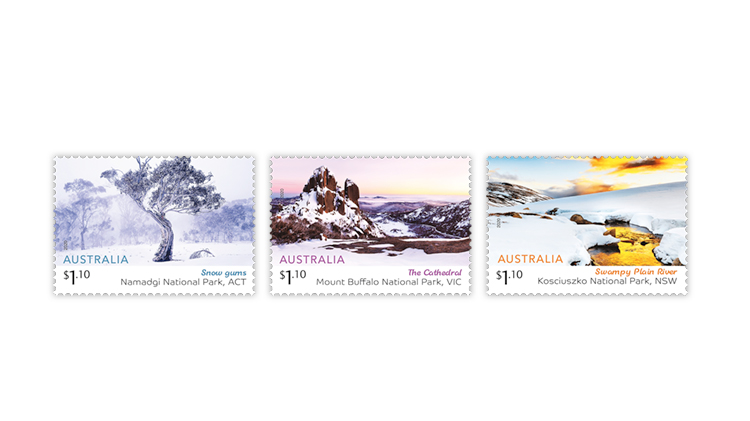 This region, which extends more than 6,000 square miles across Victoria, New South Wales and the Australian Capital Territory, includes the highest peaks in Australia and 11 national parks and reserves.

On its website, Australia’s Department of Agriculture, Water and the Environment described the area as containing a “wide range of mountain environments and plant communities, from tall, wet, fern-filled forests to snowgum woodlands and open expanses of alpine meadows, dotted in summer and autumn with colourful wildflowers. It also contains landforms created by glaciers, remarkable fish fossils and unique cold climate adapted plants and animals.”

The Cathedral, one of the granite tors in Mount Buffalo National Park, dominates the photograph by Michael Boniwell. The hiking trail to the Cathedral also can be seen.

Bruce Hood’s photograph of Kosciuszko National Park captures the reflection of sunlight in the Swampy Plain River as its flows “through the beautiful valley between Australia’s highest lake, Lake Cootapatamba, and Cootapatamba Hut,” according to Australia Post.

They were printed in a variety of formats, including separate sheets of 50, a souvenir sheet with the three stamps se-tenant (side-by-side), and coil rolls of 100.