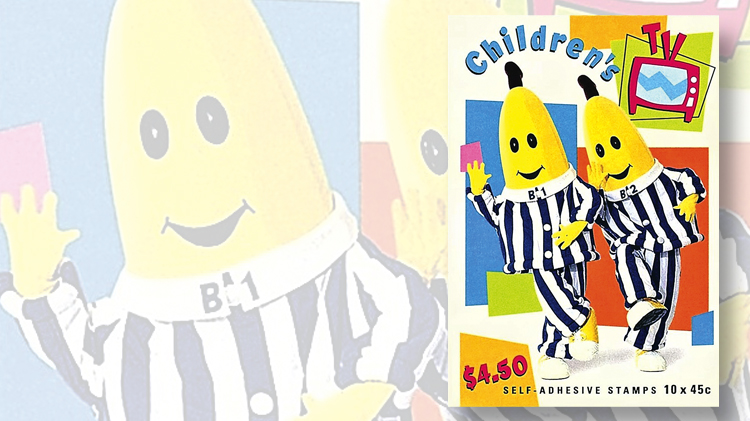 Australia’s Bananas in Payjamas stamp booklet with 10 45¢ stamps was meant to attract children into stamp collecting. The booklet and stamps belong to a set depicting characters from children’s television programs. 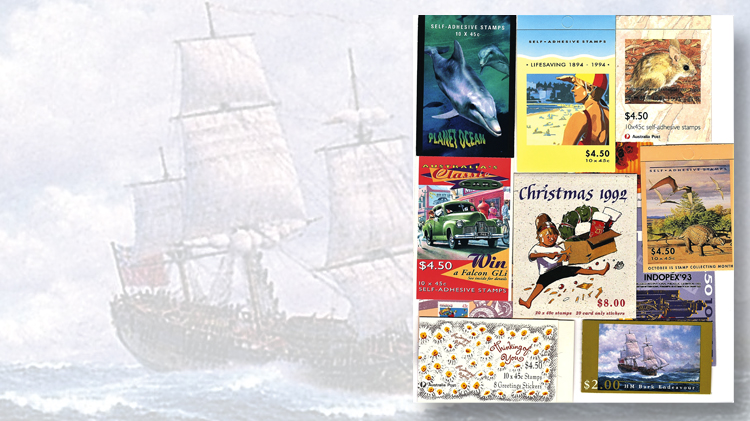 This selection of Australia’s stamp booklets is a small sampling of the interesting subjects and fascinating stamps available to collectors who are interested in booklets. 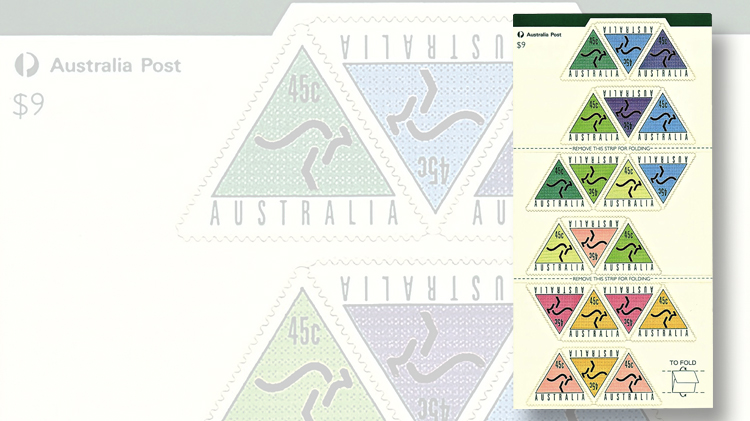 Self-adhesive triangular Kangaroo stamps, each with a 45¢ denomination, were issued in 1994 in a pane or a booklet. 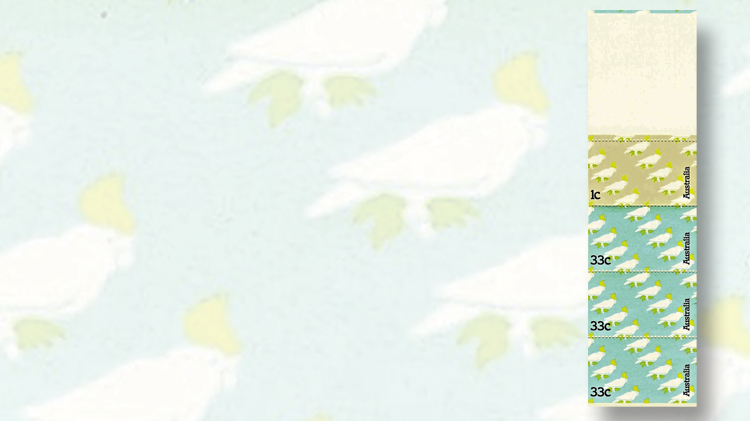 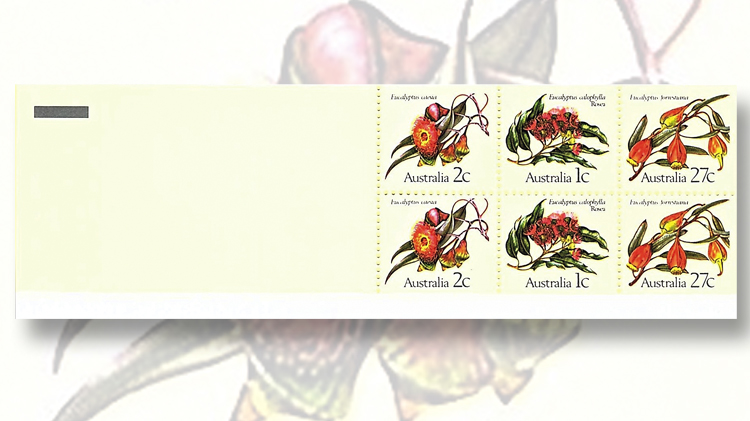 Australia’s 60¢ vending machine stamp folder with stamps featuring eucalyptus (gum tree) flowers was issued in 1982. The 1¢, 2¢ and 27¢ stamps were available only in folders. 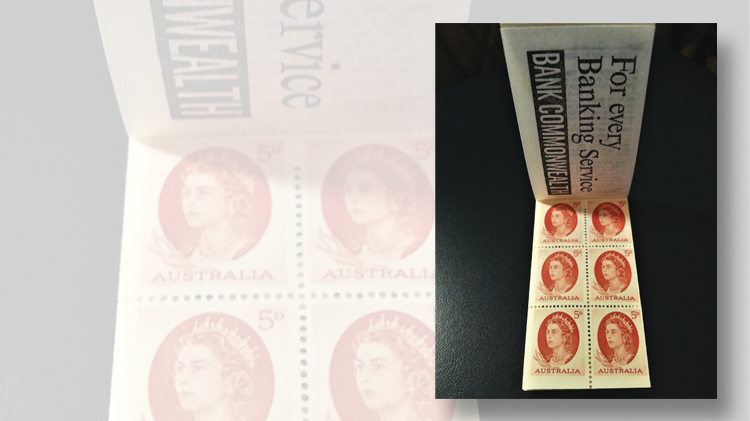 Another booklet issued in 1962 contained 12 5-penny red Queen Elizabeth stamps with waxy interleaving to keep the stamps from sticking in the hot, humid climate. 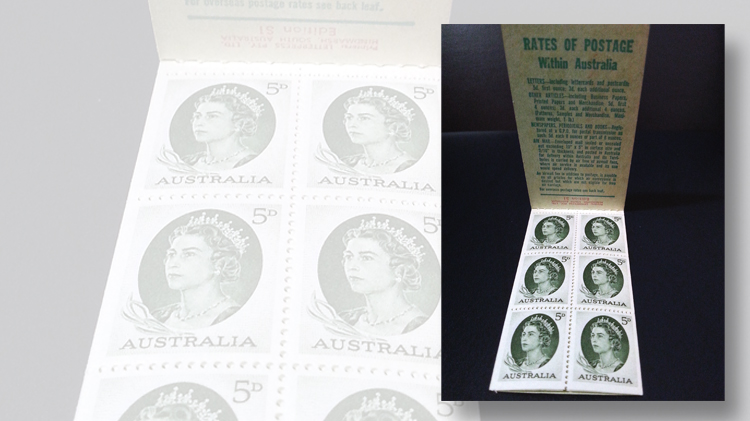 This Australia booklet contained 12 green 5-penny Queen Elizabeth stamps. The booklet was issued in 1962.
Previous
Next

Australia issued numerous stapled stamp booklets, beginning in 1913 with a booklet of 12½-penny and eight 1d Kangaroo and Map stamps.

More booklets appeared every few years, and collectors who have these early booklets intact and in good condition in their collections are sitting on a gold mine of valuable stamp booklets.

Moving along to more recent times, staples were abandoned by the post office, and instead the booklets were held together with stitches beginning in 1949.

From 1952 to 1962, a series of four booklets were issued looking very similar to each other, but they are different. A booklet from 1962, shown nearby, indicates there are 12 5-penny stamps inside. Open it up, and there are two panes of green 5d Queen Elizabeth II stamps. The inner cover presents a useful list of postal rates.

The second booklet pictured here looks just like the first booklet on the outside, but it is not the same on the inside. The inside of the booklet has two panes of red 5d Queen Elizabeth stamps, with waxy interleaves to keep the stamps from sticking together in hot, humid weather.

The “green queen” stamp booklet is a relatively inexpensive purchase, whereas the “red queen” stamps with wax interleaving is more than twice as costly. Amazing.

Booklets were issued throughout the 1960s and 1970s. Australia issued stamp booklets specifically made for Australian troops serving in Vietnam. Because of the tropical heat and humidity, the inside covers were waterproofed with a synthetic rubber resin coating, but the stamps themselves were not similarly treated.

The booklets were not placed on sale at Australian post offices, making them very difficult to acquire, and there are known forgeries made with candle wax on the inside covers .

Australia’s stamp booklets ceased in 1973 and were replaced with “stamp folders” designed specifically to fit into vending machines. The vending machine stamp folder pictured nearby contains a pane of stamps issued in 1982 featuring various eucalyptus (gum tree) flowers. The stamps were available only in folders, and the stamp folder cost 60¢ when purchasing it from a vending machine.

Another big change arrived in 1994 when Australia began issuing self-adhesive postage stamps. The stamps in the pane show a mob of kangaroos sketched out in red foil within the triangle. The pane is much like the United States Postal Service’s self-adhesive convertible stamp booklets. This pane folds into a wallet size.

The convenience of stamp booklets and folders is clearly why both Australia and the U.S. Postal Service issue many of them. Postal customers like them and buy them because they are handy.

Australia frequently issues stamps that appeal to children. Shown nearby is the cover of a booklet of stamps of a favored Australia children’s’ TV show called Bananas in Payjamas. The booklet and stamps belong to a set issued in 1999 featuring children’s television programs.

Also pictured nearby is a miniscule selection representing Australia’s booklet program as it continued to grow, making stamps easy to buy, easy to use, and often quite fun.

Give Australian stamp booklets a good look the next time you are searching for some interesting stamps. You are sure to find something you will enjoy.