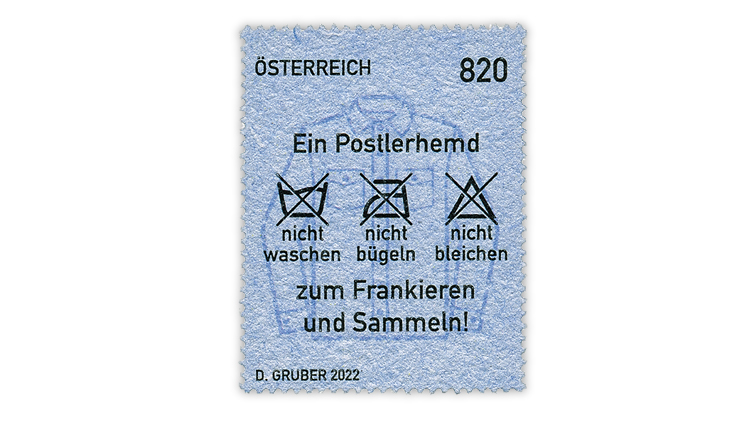 In the spirit of sustainability, the postal agency recycled postal uniform shirts to make the paper used to print the stamps.

Austrian Post said this rag paper, or paper made from textile waste, was made according to a centuries-old tradition at the last paper mill of its kind in the country.

According to Austrian Post, the old uniform shirts were shredded, mixed with water and ground into pulp. Then the pulp was scooped with sieves and laid on felt, resulting in rag paper once the water was pressed out of the pulp.

The rag paper retains some of the blue fibers from the shirts on the new stamp. The design shows a blue outline of a shirt with laundry symbols that commonly appear on clothing tags imposed over it.

The “Ein Postlerhemd” inscription on the stamp translates to “a postal shirt.” Text below the laundry symbols instructs readers not to wash, iron or bleach the stamp. Below this, readers are told that the stamp is “for franking and collecting!”

The Postal Uniform stamp’s €8.20 denomination covers the rate for large letters sent as priority shipments to the European Union and the rest of Europe. Austrian Post defines large letters as those up to 353 millimeters in length, 250mm in width and 30mm thick, with up to 2 kilograms of mass.

This new issue continues Austrian Post’s recent trend of printing certain stamps on fabric. The postal agency issued a Wool Mitten stamp printed on a blend of cotton and polyester in late 2021, followed by a Wool Hat stamp made from flocked paper in early 2022.

David Gruber designed the Postal Uniform stamp, which measures 35mm by 45mm. Variuscard printed the issue in a quantity of 150,000.