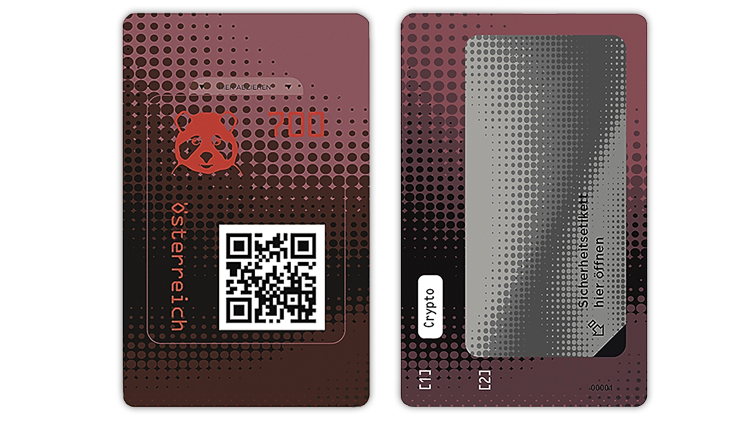 Austrian Post has announced a new set of four stamps that combine postage with the digital database known as blockchain.

Austrian Post said of its new set of four: “The Crypto stamp 2.0 can be used not only as an ordinary postage stamp for sending items in the post, but functions simultaneously as a virtual collectible. The digital pendant is stored in the Blockchain, a special type of decentralised data storage. There it is kept in a digital Wallet over which the stamp’s owner holds the exclusive rights.”

Austrian Post describes the stamps as being in a credit card format, measuring 86 millimeters by 50mm.

The “700” to the right of each animal represents the denomination of €7 (700 euro cents). The country name “osterreich” is below each animal.

David Gruber designed the stamps. Variuscard printed them by a combination of offset, screen printing, hot-foil stamping and thermal-transfer printing on environmentally friendly cardboard, according to Austrian Post.

Austrian Post said that the self-adhesive stamps can be peeled off the cardboard backing and used as postage.

Austria’s €6.90 Crypto stamp of 2019 “sold out within days,” according to Austrian Post. The print run was 150,000. The virtual version of the stamp is available in five different colors of varying quantities.

Austrian Post held a pre-order of the Crypto 2 Stamp set until June 10, and the €7 Dog stamp was sold out in the presale by June 3. However, Austrian Post said it would be available again on the June 25 issue date.

Austrian Post also said that “more details on the new functions [of the stamps] will be revealed on the stamp’s official launch date.”