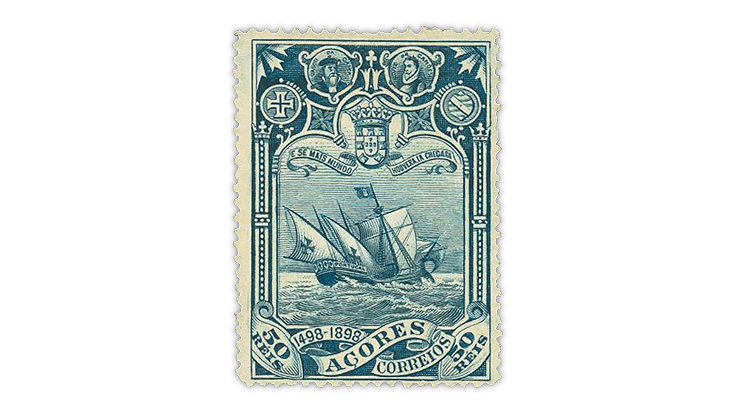 The Azores Islands are a volcanic archipelago of nine major islands and some smaller islets in the mid-Atlantic Ocean 850 miles west of coastal Portugal and 1,850 miles east-southeast of Newfoundland.

They were uninhabited when first discovered by Europeans sometime in the early 15th century. The first colonists arrived from Portugal in 1436 along with domestic animals for subsistence. There were no large animals native to the islands. Today the Azores Islands are an autonomous region of Portugal.

Stamps for the Azores were issued from 1868 to 1931. These stamps are listed under Azores in the Scott Standard Postage Stamp Catalogue. Stamps of Portugal replaced Azores stamps in 1931. Stamps inscribed “Portugal Acores” were produced beginning in 1980. These stamps are sold and are valid throughout Portugal, and they are listed under Portugal – Azores in the Scott Standard catalog.

The Scott Standard catalog values the set of eight from the Azores (Scott 93-100) at $113.50 in unused original gum condition. The Scott Classic Specialized Catalogue of Stamps and Covers 1840-1940 values the set in mint never-hinged condition at $180.

The set is a good buy in unused original gum condition at around $90 and in mint never-hinged condition at up to full catalog value for stamps in true very fine grade. To get all the stamps in very fine condition, you will likely have to buy the higher face value stamps one at a time, because most sets on offer include stamps that are not well centered.